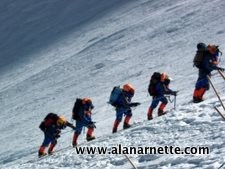 Its been rumored for the past two years that Nepal will increase the permit fee to climb Everest from the current $11,000 to $15,000 but now, according to conversations I had this week with both major foreign and Nepali operators, there is talk of increasing the Everest permit fees to as much as $25,000 per person. To my knowledge, no final decision has been made.

With global pressure for Nepal to “fix” Everest after the 11 deaths just this past spring, the Government appears to be struggling with various options while protecting their cash cow. There are no lack of opinions on how to fix Everest but they range from closing the mountain altogether (which will never happen) to instituting tighter requirements for both climbers and guides to increasing permit fees to address the inexperienced, low-cost climbers. The central issue appears to be money – both for the government and the guides.

One guide told me that the Ministry of Tourism had wanted to increase the fees for 2019 but didn’t when they came under pressure from the local guiding community to keep the permits at the same price. Obviously they felt that making Everest more expensive will decrease their business. However, just looking at the 2019 deaths, seven of the eleven deaths were members using low-cost Nepali based guides and one with a foreign low-cost guide. This model invites people with limited experience as we have seen with some of the Indian climbers who died this season.

In a shrewd public relations move, they called it a price decrease because previously it was $25,000 for an individual climber. Few climbers, if anyone, ever paid $25K for a single permit and rather formed teams to effectively pay $10,000. Thus in reality it was a price increase for the majority of those who climbed Everest.

The thinking behind that change was to allow single climbers to attempt Everest without being penalized by having to join a large team or join with a group of strangers just to get the lower fee. It helped professional climbers who usually go in small teams or sometimes as individuals. However, the real motivation seemed to be all about money as Mohan Krishna Sapkota, the spokesperson at that time was quoted:

The permit fees for individuals climbing in the “off-seasons” were also changed.  For a single climber in the autumn season, the Everest fee was reduced from $12,500 to $5,500. However, autumn Everest climbs are somewhat rare. Madison Mountaineering is running a commercial trip this year, 2019. The last time Everest saw an autumn summit was in 2010. As for summer and winter, the fee was reduced to $2,750 instead of $6,250.

For the other 8000-meter mountains, the fees were reduced to $1,800 per person from $5,000 during the spring and $900 and $450 per person during the autumn and winter and summer, respectively. This made mountains like Lhotse and Manaslu even more affordable and the impact has been a doubling of permits issued over the last few years. 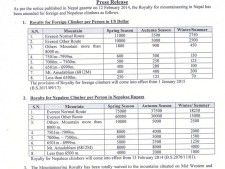 In early 2018, China twice updated their 8000-meter structure and dramatically increased their permit fees. An Everest climbing permit for the Chinese (North/Tibet) side is now USD $11,450 per person for a team of 4 or more; with three or fewer members, the permit skyrockets to $19,500 per person.

In late 2018, China announced another set of new rules under the auspices of reducing the spring 2019 traffic in order to remove trash and bodies from their side. I wrote about the new rules in this post. The key points included: “expedition formation, audit, reception, management, safety and environmental protection” for mountain expeditions on Cho Oyu, Shishapangma and, of course, Everest.

I obtained a copy of the new rules and have read them myself so this was first hand reporting. This is a summary of the changes(bold emphasis is mine):

And earlier in 2018, China added these requirements:

Lets look at potential outcomes from such a drastic price increase on the Nepal side:

This is a big unknown as the Everest market has shown amazing resiliency to bad news or high prices. Ironically after a year of many deaths or natural disasters, the following year had a record number of climbers. The deep low-end, most price sensitive customers, will definitely be discouraged but with fewer people on the mountain, it may in fact bring an entirely new market segment appealing to those with money but have been traditionally discouraged by the crowds, deaths and inexperienced clients and guides. The traditional, old-school guides may be the big winner.

One of the issues that has emerged over the past few years in the dramatic growth of ultra low-cost guides, especially Sherpa owned and run. There has always been a small segment of the guiding community, both Nepali and foreigner, that offered Everest at half the price of the majors but a new generation have used aggressive marketing, slick websites and their collective personal expense on Everest and other 8000-meter peaks to sell a low-end product with low-end services (less oxygen, “guides” lacking experience, etc.) By removing their low-price advantage, this segment could dramatically get smaller or have significantly fewer clients.

Domain of the Rich

I anticipate the average cost of a climb from the Nepal side would increase from the 2019 medium of $45,000 to well over $60,000 with the low-end reset from $25,000 to $40,000 and the high-end soaring to $100,000. This would redefine the budget climber community and eliminate the majority of those who have been attracted by under $30,000 expeditions. Everest could potentially become a rich-person domain, validating decades of stereotyping.

Given the solid assumption that maximizing tourism revenue, not safety, is the primary driver for any changes, Nepal’s Tourism Ministry stands to increase it by doubling the fees. In 2019, they brought in around USD$4.2 million for the 382 Everest permits issued. If the new structure cuts the number of permits in half, for example, they would still generate USD$4.7 million, a 10% increase. However, the losers would be the hotels, restaurants, aviation companies who would see fewer customers.

Mountain Are For Everyone

I’ve personally believe that mountains should be accessible to everyone, and not held ransom. But that is a bit idealistic in a world where countries are monetizing their natural resources. It has happened in the Swiss, Italian and French Alps, to the Cordelia Blanca of Peru to Africa’s Kilimanjaro and the US’s Rainier and Denali. Antartica’s Vision set a high point for cost at over $30,000 for the flight alone!

I believe the benchmark for climbing a mountain should be your experience and skills not the size of your checkbook. That said, people die on mountains across the globe, experienced or not. The key is to remove the enablers from the system.

If Nepal would simply put a minimum experience requirement for climbers that would go a long way to reducing the primary issue of inexperienced climbers. Second is to set a qualification program for who can guide on Everest, similar to what has been established on lesser peaks around the world. Both steps would have minimal impact on revenue for both guides and the government while increasing safety and Nepal’s current public relations problem.

I’ve been told the new pricing could happen in 2021, but that would be a huge mistake as it would encourage an uncontrolled stampede in 2020 of more inexperienced climbers that ever. If they want to increase the fees, do it now and let the chips fall where they might.