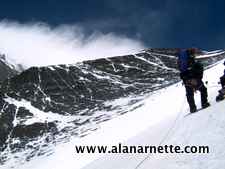 With teams now heading higher, medicine the race between Carina Räihä and Anne-Mari Hyryläinen  to be the first Finnish woman to summit Everest is being explained fully by their support teams, no Peak Freaks and Altitude Junkies.

Both are viewing it as a friendly race (kind of) and this is supported when I interviewed Anne-Mari back in February. She commented then on the “race”:

Q: Your fellow countrywoman, Carina Räihä, is also trying to be the first Finnish woman to summit Everest. Is this a race between you?

I don’t see Carina as my competitor. Mountain climbing is no joking matter. I don’t like to think that mountains are a running track or a play field. If I am unsuccessful in some running races there are always some new races coming. If I am unsuccessful in mountain climbing it is possible to risk my life. In the mountain I am focusing only on my climbing.  But of course my goal is to be the first. My mind is very competitive and I hate loosing.  If we both have same day summit push of course then I try to be first on the top.

First to comment was Phil Crampton from Altitude Junkies:

Our expedition has now taken a very interesting turn of events with Anne-Mari in camp three alongside her fellow Finnish climber, Carina Raiha. They are both competing to be the first Finnish woman to summit Everest and although a very dangerous competition, we are supporting Anne-Mari as much we can within the safety boundaries that the weather will allow.

Our professional weather forecast from the States, which we are following for a later summit attempt, is somewhat now different from the Swiss forecast for the 16th & 17th. The European forecast predicts low wind speeds so Anne-Mari is using this information for her summit attempt. This forecast, coupled with the chance to be the first Finnish woman is the reason for her earlier summit attempt than the rest of the team. Our other team members support her and wish her and her climbing Sherpa, Pasang Wongchu, success but we are content to go for our summit after May 20th.

An earlier gentleman’s agreement between the respective expedition leaders on a summit date for both the climbers to leave the South Col together did not work out, so now it’s the strongest and smartest who will prevail and we wish both climbers a safe and speedy climb to the summit. Everest always creates dramas, and although this is one I did not want, we now somewhat have a competition and I just hope both climbers are responsible enough to realize that just reaching the summit of Everest is an achievement in it’s own right.

Next was from Peak Freak’s Tim and Becky Rippel where they explain they tried to keep Carina’s summit attempt under the radar but was busted by a observant Sherpa:

Ok, the cats out of the bag. We were trying to do our bit in hiding Carina but then this happened. On May 11th, there was a plan. A plan to not put pressure on Carina to be the hopeful First Finnish Female climber to summit Mount Everest. She has competition and her every move is being watched. Carina was gearing up to sneak out of base camp before day light. Our team who have all become very close agreed to cover for her. She was ready to go when a Sherpa from her opponents team situated nearby came outside his tent to take a pee- BUSTED!!!!.. He ran and woke Anne-Mari Hyryaninen, the other Finnish female climbing for the title. We are told Ann-Mari bolted, packed up and went chasing after Carina. They are both now at Camp 2, so there ya have it.

Tim goes on to comment on the weather window basically assuring friends and family that all is OK:

This word is bouncing all over the news these days describing the ideal weather window for a summit opportunity. If it is narrow, our thinking is keep the team small. Like Lucille’s push for the summit with her friend Domhnall, no line-ups, no problem, she went for it. The small window was a good window, no wind as you can see in her summit photo holding three flags.  Most windows are small, the one we see right now is small but it works for us considering our size, who is also there and our large sherpa support.

Note that Altitude Junkies state they both are at camp 3 but Peak Freaks says they are at camp 2.  In any event, more reports this afternoon of high winds at camp 2 preventing any of the other teams from moving higher so we will see what their next move is.

I encourage you to read all of both Phil and Tim reports on their sites: Altitude Junkies and Peak Freaks.

Another good report is from Jamie Clark with Hanesbrands who is sitting at camp 2 watching the weather. He explains it all in a good video just posted.

Missing Nepal Trekker ALERT: The following is from their Facebook page.

She took a bus from Kathmandu to SYABRUBESI on April 19, and began the 7-8 day LANGTANG trek in the Himalayas on April 20. She planned to follow the Lonely Planet guide. She should have returned to Kathmandu between April 30-May 1. We have not heard from her since she began the trek. She is trekking ALONE. Nepali agencies are working on this, including the US Embassy. If you have any contacts or information to help with our search please e-mail both csacco2700@gmail.com and amandaryan28@yahoo.com. Please repost this on twitter or any other forms of communication you have access to. Aubrey is the American in the photo. THANK YOU!

6 Responses to “Fins at High Camps in Race for Everest”