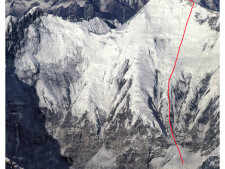 For the first time in recent memory, three separate teams will attempt new routes on Everest in the same season on both the Nepal and Tibet sides.

While all these faces have been climbed, they are so expansive that new routes are always available. This 2004 article posted on ExplorersWeb provides an excellent overview of the various routes

Information is still a bit vague on this year’s attempts but this is what has been made public this far:

Updated from russianclimb.com that “20 March, 2013 Gleb Sokolov didn’t find enough money for his Everest project (new line on Kanchung Face in alpine style), so postponed it to next year”

A report via the 7 Summits Club website is that they plan to climb a new route from Tibet on the East Face ( Kangshung Face) in alpine style without oxygen. They will acclimatize on Changtse Peak (7550m), via the northern normal route.

Gleb Sokolov has extensive experience including climbing on the north face of Everest, on the west face of K2, and on the first ascent of Lhotse Middle. Plus he climbed also Makalu, Lhotse Shar, Lhotse Main, Cho Oyu and Manaslu. 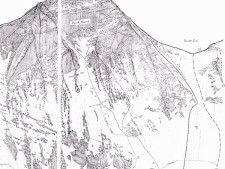 From the Nepal side, there appears to be two new efforts. The first is by Denis Urubko and Alexey Bolotov. Urubko reveals some interesting details in this interview with Spainish site desnivel.com

They will climb the Southeast Face starting from the Western Cwm in alpine style with no support: Sherpas, oxygen or even satellite phones which Urubko feels is a “distraction”. He goes on to say they will go slowly enjoying the flowers as they trek in.

Sponsored by The North Face and Commercial Bank ‘Financially-Capital Industry’, Urubko said this is about pure alpinism and they are “… just two friends who are ready to work hard and die if necessary.”

Their plan is to climb in the area of the pillar on the left flank of the Southwest Face. They are drawn to the vertical line from the Cwm to the Summit. He saluted the previous efforts saying “all are incredible difficulty”.

On the crowds and nonprofessional climbers on Everest, Urubko is generous saying

”I like. It means that there are many people who prefer not to stay in the chair in front of the television, but to act. Moreover, like mountaineering and can support the economy of Nepal. For me, it is important not to create problems in a normal way for that kind of climbers. Mountaineering is free for everyone, not only for expert alpinists.”

Alexey Bolotov, also Russian, was born in 1963 and was recognized on one of the world’s alpinist with the Piolet d’Or for his 1997 ascent of Makalu

Another new route on the Southwest Face. Details are still a bit sketchy. But they have posted an extensive interview on the montagna site

Simone Moro, from Italy, is a world class climber starting his career in the Dolomites. He has focused on winter expeditions with climbs on Aconcagua, Broad Peak, Shishapangma, Makalu, and Gasherbrum II. He has four summits of Everest.

Ueli Steck, has an extensive resume including El Capitan free climbs to 8,000 meter peaks. He is probably known today as a speed climber. Born in Switzerland in 1976 his recent climb of the Eiger North Face received worldwide acclaim, climbing the 6,000 foot North Face in 2hr and 47 minutes.

Best of luck to all these teams.