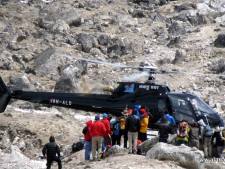 Nepal’s Ministry of Tourism has a long history of stifling the truth regarding Mt. Everest. However, this spring of 2021 is a new high or, better said, a new low. The COVID-19 virus appears to be spreading quickly throughout EBC and the Khumbu, with frequent evacuations to Kathmandu, where individuals are testing positive for the virus. Still, there are no official comments, and worse, there is denial. A few climbers and trekkers have chronicled their stories on social media, but that is the tip of the iceberg. The cases could ten times the four that have been reported.

We’ve seen censorship in Nepal before. The country’s government is so sensitive to any negative publicity that they go out of their way to squash bad news. In 2008 when China paid Nepal tens of millions of dollars to keep climbers off Everest until the Chinese could get the Olympic torch to the summit, satellite phones were confiscated at the Nepal Base Camp to prevent news from getting out. I was there.

This year, the Tourism Ministry “reminded” climbers of an alleged long-standing law that no photos of avalanches, trash, bodies, or a long line of climbers could be shared. In other words, anything that could be construed as unfavorable could only be shared or posted on social media with prior government approval. Even long-time Nepal stalwarts like Ang Tshering Sherpa of Asian Trekking said, “it’s not possible to prevent the dissemination of videos or photos taken on Everest because millennials stand out for their use of technology, and even the older generation has embraced the digital life. You make a click here, and in an instant, your photo goes around the world.”

With neighboring India experiencing a massive explosion of virus cases, it’s only time until it leaks into Nepal. The government issued a night-time lockdown for three large population centers this week based on spikes in new cases. But for Everest, all is well, according to government officials. This report quoted Mira Acharya, a spokeswoman for Nepal’s tourism department, who said it had not received any reports of COVID-19 among climbers. “A person was evacuated on April 15, but we were informed that he is suffering from pneumonia and is being treated in isolation. That is all the information we have received.”

The first known case was Norwegian climber Erlend Ness who was flown to Kathmandu where he tested positive but then was told he had altitude sickness. He moved to a different hospital where he again tested positive. He is now out and recovering, hoping to get home soon. Another COVID case is with now world-famous Nirmal Purja’s Elite Himalayan team, Steve Davis. It’s also reported one of his lead Sherpas was evacuated to Kathmandu and is now in quarantine. But hospitals have been told not to comment on any COVID cases regarding climbers.

The Nepal Government-issued strict regulations for testing, vaccines, and on arrival quarantine for all visitors but most of this was voluntary and not enforced. In essence, there was little done to prevent COVID-infected individuals from entering the country, as long as their $11,000 permit fee and $125 visa fee were paid. Most Everest teams spent as little as two days in Kathmandu before flying to the Khumbu. In teahouses, climbers, and the few trekkers in Nepal this spring, rarely wear masks and sit shoulder to shoulder.

Where are the Operators?

So why are we not hearing from the expedition guide and climbers? Simply put, fear of expulsion or ban from climbing. The Ministry has made it clear that this is the year of no bad news. Operators fear having their expedition canceled and forfeiting lucrative climbing permits in the future. Simply put, threats of retribution, cold-war Soviet style. In 2008, a climber who hoisted a negative sign about Tibet was arrested, threatened with jail time, eventually deported and banned from the country.

What is Nepal Hiding?

What are government officials afraid of? Easy: Losing money. The photos showing the long line of Everest climbers in 2019 between the South Summit and the summit revealed the gross mismanagement by officials on Everest. The lack of qualification for climbers plus the lack of serious qualification for guides resulting in inexperienced clients with unqualified “guides.” The lines in 2019 were a direct result. They will not put the revenue stream at risk due to bad publicity, even if it’s of their own making. Nepal has already collected over $4 million in permit fees this season alone.

China had established quotas limiting the number of foreign climbers, performed serious clean-up efforts, and positioned officials to monitor teams for proper conduct on the mountain starting back in 2018. Nepal has continued to issue “paper” rules that have been parroted by the naive mainstream press, citing how Nepal was being serious about making climbing safer and cleaner. With record permits issued, by Nepal, officials became concerned about overcrowding so they said teams can attempt the summit in the order they received their climbing permit. This yet another example of how out of touch the officials are with the realities of climbing.

Now, officials are afraid they will be accused of opening Everest too soon, especially with China’s closure, and taking a lackadaisical attitude towards virus screening. In their effort to conceal, misdirect and cover up, they are bringing attention to the very areas they want to hide.

Is there a Risk?

With 1,000 people in close quarters, the risk of infection is real. The latest studies show that the virus is mostly an airborne spreader. Climbers standing close together on a fixed line in the Icefall or the Lhotse Face breath heavily and sometimes inadvertently spit. Standing six feet apart is not an option at times. Of course, wearing a mask is, and many do this anyway to reduce the risk of a lung infection.

But the real issue is visiting other teams, especially the support staff who will socialize with their friends at base camp or go back to their village before the summit bid. All it takes is one asymptomatic person to take down an entire team. Leaders will need to educate and enforce their bubble principles like never before.

And let’s not forget the local people of the Khumbu, Kathmandu, and Nepal. They have enough problems with COVID from Inda that they don’t need 400 people showing up, some asymptotic, spreading the virus. Access to medical treatment and oxygen for example usually requires an emergency helicopter to Kathmandu from the Khumbu. Hopefully, everyone who came to climb received their vaccination at least two weeks before entering Nepal.

Why Should We Care?

I totally get that Nepal needs the tourism industry back after a devastating 2020. I’m told the Sherpas and tourism industry are thrilled to have customers back. Also, hundreds of climbers are able to pursue a lifetime dream. All this is evident and understandable. However, if there is public health risk hidden, or worse covered up, by government officials in order to sustain revenue, that crosses a line for me. Clearly, this is not unique to Nepal. The US lead the world in misinformation on the virus in 2020, and hopefully, we learned to be more transparent in 2021 … we will see.

Nepal has incredible natural resources that will attract tourists without sleight of hand. Transparency and honesty will attract more tourists than deceit.

There are almost 400 foreigners on Everest with a similar number of Sherpa guides plus a few hundred cooks and support staff. So around 1,000 people at Everest Base Camp. From public posts, teams are conducting business as usual, with several hundred in the Western Cwm on their acclimatization rotations, used to adjust to the altitude before the summit push in mid-May.

With the apparent outbreak at base camp, those returning will need to take isolation seriously along with the Sherpa, and cook staff. In other words, follow the “bubble” strategy many operators established in the beginning. Only a few teams have COVID testing capability. When a person begins to show severe medical problems from an upper respiratory infection to the common Khumbu cough to COVID, only a test will show the real problem. But operators may be shy to send one of the Sherpas back to Kathmandu as they will be held for a week or more, especially if they test positive. And clients? Well, they might not be able to return to their home country if positive, thus looking forward to a few weeks in Kathmandu, the epicenter of the latest outbreak.

This is a bad situation with no clear answers.

14 Responses to “Everest 2021: What is Nepal Hiding about COVID at Everest Base Camp?”