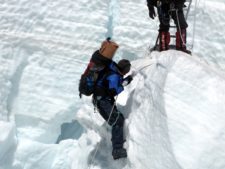 The headlines for last week are COVID and record permits. Four people have been evacuated either from Everest Base Camp or very close with symptoms of COVID-19. Once in Kathmandu, they tested positive for the virus. It’s a similar story for a few Sherpas. Look for the ropes to reach the summit this next week.

Without a doubt, the virus is in the Khumbu and spreading. The open question will be if it can be contained at EBC. Complicating the situation is Nepal’s limitless issuance of permits, now topping 400, blasting through the 2019 record year of 382. Meanwhile, there are 40 people on the Chinese side that include 21 climbers.

Not to be forgotten is that six years ago today on Sunday, April 25, 2015, the devastating earthquake took over 9,000 lives in Nepal. Om Ami Dewa Hri

Heavy snowfall around Everest brought progress to a halt starting on Wednesday. Over a foot of new snow fell resulting in the wise move to pause all climbing to let the snow settle. The rule of thumb with respect to avalanches is to let fresh snow, especially of this amount, 24 to 48 or more hours to bond to the previous layers. Otherwise, the risk of avalanches is substantial especially with movement by people. Humans cause many avalanches in popular mountain areas.

Teams restarted climbing on Sunday, April 25 The Internet at EBC has been spotty at best and down at the worse due to the weather. But over the weekend it appears to be back up. Alpine Ascents International gave this update on the Icefall conditions:

Today I climbed to Camp 1 to check out the icefall conditions and to drop a few items of my gear. The icefall is in great shape. After seeing the icefall the last 10 seasons I feel like it is in great shape and safe. It will be a bit challenging because the route tends to stay mostly in the middle which means there are a lot of ups and downs navigating through some big crevasses, but being away mostly from the West shoulder of Everest makes it safer in my opinion.

More climbers declared their intent to climb without supplemental oxygen including Kilian Jornet who will attempt the never accomplished true traverse of Everest-Lhotse via the West Ridge. I like this quote from David Göttler climbing sans O’s.

Everest. Here I am again. Some of you may ask WHY? and I get that, and sometimes ask myself the same: but in 2019 I stopped 100m from the top, and for me it feels unfinished. I would like to complete what I began. This year there are even more layers of uncertainty than ever before but I know that these big objectives can take many years and many attempts. Letting a year just go by without trying feels wasteful of precious time. I’m taking things day by day and hoping that the stars align for me.

You can see several teams now at Camp 1 on my team location table. Look for limited communications from the teams who are in the Cwm this week as the WiFi at EBC doesn’t reach any higher. Those climbers with sat phones or devices like the Garmin InReach will be able to communicate to friends and family via text messages.

Last week Nepal’s Ministry of Tourism issued more silly rules trying to manage their explosion of permits They suggested that teams go for the summit in accordance with when their permit was issued and further, no more than 170 climbers at a time. These new rules will be generally ignored according to the word on the mountain. They are unenforceable and put climber’s safety at risk and make no sense. See my analysis for further details.

With the snow letting up, teams will get back on schedule for acclimatization rotations in the Western Cwm. This is the schedule for Mike Hamill’s Climbing the Seven Summits team as posted by Steve Stevens:

What’s unusual about this is to tag C3 on the first rotation. However, they did tag 20,000-feet on Lobuche a week ago, so this is a stretch but not a huge one.

Summit Climb posted their plans for an unusually long first rotation of 10 days. Perhaps they too will tag C3

This morning we received word the new snow has settled and the icefall route has been carefully checked by the icefall doctors and is open for travel. All 9 of our members say they are ready, willing, able, and excited to go. Our 12 Sherpas are packing their rucksacks with our team member’s personal equipment, the Sherpa’s own equipment, and the group equipment needed for a 10 day visit to Everest’s Western Cwm. The weather seems perfect and we plan to depart at 1am tonight.

The usual schedule is to leave early, as at 3 am for Camp 1, at 19,000′ taking five to eight hours. Arrive at C1 early around sunrise and settle in for a very hot day if there are no clouds. The next day is an “active rest day” where they put all their climbing gear back on (big boots, crampons, harness, jumar, carabiners, etc.) and walk about halfway to C2 then return to C1 for the night. The next day is a move to C2 at 21,000′ where they will spend at least two nights but maybe three or even four before returning to EBC for a well-deserved rest.

I suspect that teams may be feeling the pressure of a lost week with the snow and Icefall conditions last week. Now they are trying buy some time with only one rotation and tagging C3 on the first rotation. A bit of a gamble, but as we saw on Annapurna, by using high levels of supplemental oxygen starting lower on the mountain, climb times can be dramatically reduced. Of course, this leaves open the question of style, but that’s a personal decision.

The weather for the next week looks better than last week. Highs in the Cwm will range between 0 to +10F, so it will be cold but dry. The winds will be extremely low so the wind chill will be manageable. But it will be cold. Look for the ropes to get to the South Col and perhaps the summit this week.

Often climbing comes down to attitude, not altitude as Scott Fischer was known to say. I like this post from Ecuadoran legend Oswaldo aka “Ossie” Freire leading a private climb on Everest with the Climbing the Seven Summits team:

No matter how complicated a situation is, if you are surrounded by professional and wonderful people you will always find the solution. I’m lucky to work with some very special people.

Mountains bring people together and hep us become kids in a sense that we say hello, and 5 minutes later we are vest buddies. Happy birthday to my new climbing friend @pasang7936 also got some cake and we all had fun

A postscript on Annapurna. We saw a record number of one-day summits plus a record for female climbers at 14. Congratulations to all. As I’ve written before, the style used this year was a page from the Everest playbook – overpowering the mountain with the use of a large number of skilled Sherpas to fix the routes, start supplemental oxygen at lower altitudes and higher flow rates, go in-mass so as to create the booth-path and “steps” thus eliminating breaking trail for any member, and use helicopters to resupply if needed.

Some of these techniques are used on other mountains around the world like Denali or Aconcagua, but rarely on the 8000-meter peaks and never on a peak like Annapurna. As American female summitter Tracee Metcalfe told me this week during a call “Annapurna was much tougher than either Everest or Makalu.” Also, she told me that there was a limited weather window, so they rushed the summit after being on the Hill for only two weeks – unheard of for most people.

With the mass operator Seven Summits Treks leading the charge with huge teams with huge support, look for this model to be used across all the 8000-meters peaks making the exclusive 14-8000er Club become one that Groucho Marx would say, “I refuse to join any club that would have me as a member.”

Some of the Annapurna summiters are moving to Dhaulagiri but the route fixing hasn’t begun in earnest. There are climbers who have overnighted at C2 but without ropes. Among the climbers is 82-year-old Carlos Soria is on this 12th (yes twelfth) who is at Dhaulagiri Base Camp. He reports deep snow that has climbing on hold for a few days similar to Everest.

The Slovak-Romanian team lead by Peter Hamor with Marius Gane and Horia Colibășanu has made progress on their attempt the North-West ridge and then descend along the North-East ridge. They’ve fixed the crux of the route. Perhaps look for a summit attempt this week from them as well as from Carla Perez and Topo Mena on the standard route.

The permits for Everest surpassed the previous record of 382 foreign permits set in 2019. The Nepal Ministry of Tourism posted these foreign permit tally as of April 23.

One Response to “Everest 2021: Weekend Update April 25 – COVID and Records”