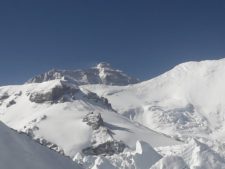 Monday was expected to be large given the ropes were now set to the summit on both sides of #Everest2018 but a small wind event, that was predicted, seemed to stall almost all the teams on both sides. Its unclear if there were any summits from the Nepal side and only a handful on the the Tibet side. As we enter late Tuesday night 15 May on Everest, conditions are noted to be perfect with clear skies and little wind. This will be what I call Summit Wave 3.

There were over 12 summits early Tuesday morning 15 May. Reports have Kari Kobler putting 2 members, 1 guide and an unspecified number of Sherpas on the top from the Tibet side. Kari noted on his site that there were high winds last night:

A small team from Climbalaya treks & expeditions also summited from the both this morning.

Steve Palin and Jon Gupta, not content with just nabbing Everest (and the other 7 Summits for Steve), went on to summit Lhotse last night and apparently want to attempt Nuptse. For Jon this will be his second attempt of Nuptse this season, as he tagged along with Guy Cotter a couple weeks ago. They turned back within 100 meters of the summit due to poor conditions.

On a disturbing note, renowned Sherpa, Lam Babu Sherpa reported missing above the South Col since 14 May.

Over on Lhotse, Satori Adventures had a good night with 5 members and six Sherpas making the summit including Kuntal Ajit Joisher whom I interviewed earlier this season.

The Himalayan Times is reporting a 32 year-old, Ang Dawa Sherpa from Solukhumbu, has died at Makalu base camp from altitude related issues. He was with a four person Chinese team and began developing issue at Camp 2 after he and one member had summited over the weekend.

The weather is reported as “perfect” from teams on both side who at the high camps tonight in Nepal. Looks like it may be a busy night Tuesday night with Adventure Consultants private, Jagged Globe team on the South, Furtenbach, Alpenglow on the North and more and more. Kenton Cool and Ben Fogle are at the South Col expecting to attempt the summit tonight.

Michael Lutz with Furtenbach posted about a difficult night last night, Tuesday 15 May:

15/5/18: Quick update from camp 3 (8300m):
Last night we had a terrible snowy storm which was incredible cold. When I woke up (still no oxygen unlike basically everybody else) I was terrified: I couldn’t feel my hand and feet, and felt miserable.
So now I am walking also with O (maybe next time without, then

????).
One last dance tonight (starting at 10pm) and see you then again in base camp in a couple of days!

Patrick McNight is on his summit push and noted many people on the north side headed higher, “Many people headed toward camp 3 right now. We can see probably as many as 40 in a row between c2 and c3. Glad we are going later.” you can follow Patrick on his GPS tracker.