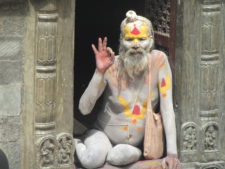 The end of March evokes all kinds of emotions for those who follow Everest each spring. Each weekend during the season I will try to post a “Weekend Update” summarizing the main stories for the past week.

The headlines this week are all about climbers flying into Kathmandu and some starting the trek to base camp and that the Icefall Doctors have the route to Camp 1, VERY early which might help reduce crowds IF the early teams take the opportunity to begin the acclimatization process and go for summit in early to mid May IF the weather allows.

As you read this, there are people walking down the stairs from their Thai, Qatar, Emirates, Turkish, Air China or many other airline’s flights. Some will stay in Kathmandu just for a few days before flying to Lhasa for their attempts from the Tibet side, but most will stay in Nepal for the next eight weeks. And for those who just said goodbye at the airport, the long waiting game begins where “no news is good news” is easier said than done. Excitement, anxiety and anticipation builds in both places and will only grow stronger each day. 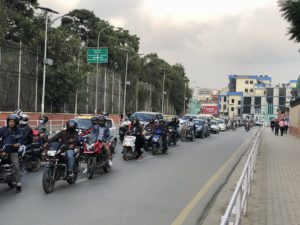 The capital of Nepal is an ever changing living organism that tests patience and rewards the senses. Just the drive from the airport to the hotel is a slap in the face with the realities of such a crowded city.

Avoiding cows in the roads, and marveling how the driver avoids the swarm of scooters is an education in driving skills. Checking into the hotel, whether the Yak and Yeti for the high-brow or the Garuda for the person wanting something traditional, the process becomes a first taste of the Nepali culture. Polite, always with a smile, you are checked as another polite person struggles to haul your two, or three stuffed, oversized duffle bags to your room.

Once in your room, if you choose the single supplement option, you are alone for the first time in almost two days. You sit down heavily on the single bed. You are tired, It has been a 30 hour journey if you flew from the Americans, half that if from Europe and a few hours if from India or China. Regardless, you look around the room but your gaze becomes fixated on your duffles.

Almost without thinking, you unlock and unzip the bags and begin to take a few things out. You know you will have to unpack everything for the gear check. You offer a small prayer that you haven’t forgotten anything important, like boots!

These days you can buy almost any climbing gear in Kathmandu. The big boys of The North Face, Mountain Hardwear and others all have official retail stores – conveniently located across from Fire & Ice. More on that in later blogs. And it seems that the sign above every store in Thamel boasts “Trekking, Rafting, Expedition, Jungle Safari and more. And every stranger is trying to sell you Tiger Balm, or something more potent. 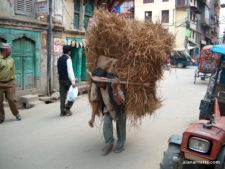 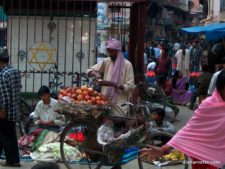 Fruits and vegetables in Thamel 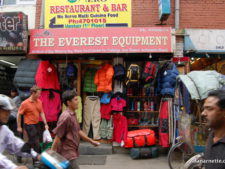 You can buy most climbing gear in Thamel, but often they are fakes. 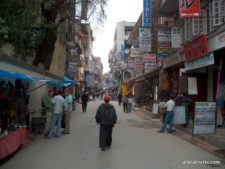 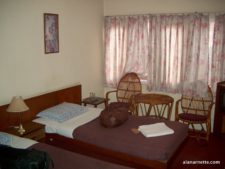 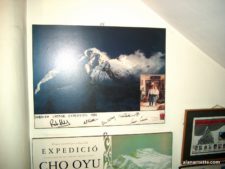 Poster of history in the Garuda – Rob Hall, Ed Viesturs and more 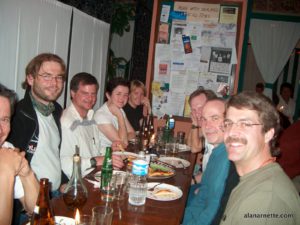 Most likely after getting settled into your room, you head downstairs to the lobby to meet up with your team. These days it can be a group of five or 50!

I often get asked the question if I climb with the same people all the time and the short answer in no because it’s virtually impossible to coordinate time, money and interest beyond one or two climbing friends.

So, like many amateur adventures, we sign up with a commercial team to leverage time, money and interests. But this means you don’t know who you are climbing with. In some ways this encourage you to go with the same company if you do many climbs so to at least get familiar with the guides who may run your next trip.

This first meeting of the team is a wonderful example of human dynamics. You have the introverts, extraverts, those with huge egos, shy people and those who you quickly figure out you want to avoid! Unless I’m climbing with good friends, I like teams between five and 10. This gives you the flexibility of spending time with those you enjoy and not with others.

Climbing these big peaks is really an accelerated exercise in relationships. You sort out who you want to walk beside and those you want to be separated from by a camp or two. Your guides make their first impression – type A personality or another “climber dude”. Regardless they will watch your every move for the next two months, both good and bad at the same time.

Those who are trekking in the Khumbu have reported that’s it cold and a bit windy – totally normal for late March/early April. As anyone who has gone to ECB can attest to, it’s cold now but warms up as we approach June. This is one reason many commercial expeditions like to climb Everest in the spring and not in Autumn when the weather patterns are just the opposite.

Michael Fagin of www.everestweather.com has been forecasting for Mt. Everest since 2003 and weighed in today with some thoughts about Everest weather over the next week or so:

The climbers are slowly headed for Everest basecamp while the support team of Sherpas are setting  up the camps. Also Ice Doctors start do their work on the ice fall and  during April supplies will be carried to higher camps. Thus it is a good time to start looking at what the weather patterns look like for the first 2 weeks of April.

I will discuss the location of the jet stream and maximum summit winds. Winds of course would be lower at the camps below the summit. Also will be  looking for any big snow storms on the horizon.

The major forecast models have an upper level ridge of high pressure anchored over the Everest region at times. The main impact of this will be to steer the jet stream well north of us.

How about snowfall? Models just showing some light snowfall at times for higher camps. I’m not expecting more than 2 inches (5 cm) in any one day.

One certainly needs to be careful with these forecasts extended to 2 weeks. We are not seeing the jet stream over nor near Mt. Everest for this extended period. Thus I would not expect the maximum summit winds to exceed 30 mph (48 km/hr.) and in all likelihood below that much of the time.

Snowfall? This is pushing the forecast models as the skill in the extended is limited for snowfall. However, models are not showing any major snowfall events over this period.

The climbers are ramping up with their posts, videos, and pictures but not a lot thus far. I have a list of climbers in the sidebar with links to their most active media but click to see what else they are posting. These days people post to Facebook, Twitter, Instagram, SnapChat, blogs and who knows where else so it has become harder to follow 🙂

Remember that most teams will not enter the Icefall until mid-April. Hopefully a few will start early this year.

I have begun to create my annual team location table and tracking climber’s blogs (see sidebar). If you have a team not listed, please let me know and I will add them if I can track them. If you prefer not to be mentioned, please contact me. You can sign up for (and cancel) notifications on the lower right sidebar or check the site frequently.

Here’s to a safe season for everyone on the Big Hill. 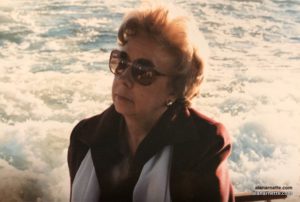