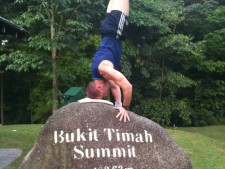 This interview with Grant Rawlinson is part of an ongoing series of interviews I do each season with Everest climbers. Not the famous, sponsored ones who get plenty of publicity but the regular people, who have full time jobs, full time families in many cases and climb for the love of climb. Please send me your suggestion for an interview. Now here’s Grant:

Climbing Everest is never easy. Sometimes you hear people dismiss a route as a Tourist Route; or pay your $65,000 then tie yourself to a Sherpa and get hauled to the summit. I respectfully disagree and suggest anyone who hears such a comment, ask a person who has been there, “So just how easy was Everest?”

Grant Rawlinson aka “Axe” would be a good person to ask. In 2011, he attempted Everest from Tibet. His story is full of lessons for everyone considering Everest and a wonderful story for anyone who has hit a bump in the road of life.

Born in New Zealand, this Kiwi has set his sights on returning in 2012 to finish what he started. He took some time from his training to speak with me about his journey and goals.

Q: You attempted the north side in 2011 without a summit. What happened?

I had some issues with the altitude early on in the expedition.  I pushed it too hard, too early. I live and train at Sea Level here in Singapore, therefore my body really needs a lot of adjustment to acclimatize as I get higher.  I developed H.A.P.E at Advanced Base Camp at about 2AM in the morning on my first acclimatization cycle.  There was only about two others left in our camp (including the Cook), and I had a pretty anxious 5 hours lying in my tent waiting until the sun came up.  I then spent an awful 11 hours struggling my way back down to Base Camp that day.  I felt completely exhausted from the H.A.P.E, it really drains your energy, not to mention the fact I felt like I was suffocating and could not get enough oxygen when I was breathing. I was also coughing up blood and needed to rest every 50 meters to breath bottled oxygen. But I was to weak to carry the cylinder myself.  I was so tired I kept falling asleep everytime I fell over.  Nima, a team sherpa was helping me down.  He would wake me up everytime I went to sleep and we would set off down again.  He was my guardian angel that day.  He never complained once as he walked behind me step by step the entire 11 hours.  He had to basically drag me up any slight inclines as I was to weak. I would hate to get H.A.P.E higher up the mountain where its on more technical ground.

I then went down to a small village called Tashyzom at 4200m, by myself for 3 nights.  This was to try and allow my lungs to recover from H.A.P.E.  The village was pretty basic, and I developed a very painful tooth abscess in my front tooth as soon as I arrived.  Unfortunately I had nothing to it with.  So my time in Tashyzom became a tradeoff from resting my lungs and allowing them to recover at a lower altitude from H.A.P.E, as to how long I could stand the pain from the tooth abscess.  I also got diarrhea from the food in Tashyzom as the conditions were very dirty. To top it off there was no vehicle to get me back to basecamp.  I ended up catching a ride on a motorbike back up to basecamp.  This took hours and every bump was really painful on my tooth,  like someone was driving a hot needle up through my mouth into my head.  I had also left basecamp in such a hurry I did not have my papers with me, and had issues getting through the three military checkpoints back into basecamp.  By the time I got back I was pretty miserable! I crawled straight into my tent, swallowed some amoxycillin and went to sleep for a 1.5 days.

It was all character building stuff however. I did recover over the next few days from the tooth absess, diarhea and the H.A.P.E.  I eventually managed to get back to 8350m on our summit attempt a few weeks later.  I had terrible luck with the weather though and it got very windy on summit night.  I developed really cold hands, after having a bad start from the tent at 11PM.  My oxygen valve on my bottle iced up, my crampon straps froze solid, my goggles exploded, all things which required me to take my hands out of my mitts and fix.  My hands were freezing before I left.  I climbed about 50m above the camp to 8350m before I realised I had a serious problem with my hands and I could not get them warm again.  I decided to return to the tent to reheat them and I figured I could start again in an hour or two as it was still only 12PM.  Back in the tent however, the wind never dropped and the other climbers started turning back also.

I never really thought about not returning, it was just a question of when, and by what route. When I took one last look at Everest from basecamp as we drove off, I knew then that I would be back. I have focussed on Everest for so long, learnt so much of the history, trained so hard, went through so much pain on the expedition and got so close to the summit. I learnt a great deal in 2010, especially about climbing in extreme cold. Alot of things I learnt were small things, but these can make a big difference when you are up high and it’s really freezing. I am really excited about getting back. I am making adjustments to my training regime, my gear systems and my acclimatisation strategy. I will be stronger physically and mentally. Some people think I am nuts wanting to go back. Everyone is entitled to their opinion I guess. For me it seems like the perfectly logical decision. Failing this year to reach the summit is not a good reason to give-up trying. I got through a
lot of things that would have probably sent others home, so I think I have earned another shot.

Q: It is often said that the north side is significantly more windy and cold than on the south. What was your experience?

In 2011, climbers from the South Side were summiting in very early May. Whilst on the North the ropes couldn’t be fixed until around the 20th May, and there was only around 4 summitable days from the North side in all of May. It really gets super windy, which makes it feel so much colder up higher.  Once you get above the North Col you are completely exposed to the wind. Below the North Col its not so bad.

Q: Who will you be climbing with and which side will you climb?

I will be climbing with Altitude Junkies from the North Side again.  I feel like I know the route well from the North now, and I am super keen to finish off those last 500m vertical metres of the ridge up to the summit.  The exposure and the rock steps look awesome.  The rest of the climbing up to this point is really quite mundane and boring.

Q: You are a Kiwi from New Zealand but live in Singapore. How are you approaching training living at sea level?

Singapore highest point is 163m above sealevel (see photo attached of me on the ‘summit’!).  What we lack for in hills in Singapore we make for with tall buildings! I live in a 30 story apartment so use the stairwells in this every day for training.  I also run through the parks here up and down whatever hills I can find. I travel alot for my work, all over Asia, so use whatever I can find in the hotel when I am on the road for training purposes.  I do weights three times per week interspersed with my hill running and stair training.  My training is supervised by my personal trainer Darren Blakeley from UFIT who is excellent. He keeps me on track and balanced in my training.  Its really no problem to train physically here in Singapore.  The real issue you cant prepare for here is the altitude.  So this year I will head earlier to Everest and do an acclimatization trek somewhere  in Nepal, just before we leave for Everest.

Q: Your nickname is Axe, where did that come from?

I played rugby for 25 years, starting in New Zealand and then in Singapore here for 10 years where I represented the Singapore National side.  My nickname was given to me after a rugby game and has something to do with the way I was tackling people. As if I was an axe chopping down a tree.  Unfortunately it was given to me in jest and rather a sarcastic way,as I happened to be having a very bad game that day.  However the name just stuck and many people now know me simple as ‘Axe’ and do not know my real name!

Q: Any other thoughts for us followers this year?

Interested people can follow my progress on Everest this year by logging onto my blog.  Thanks as always to my sponsors John Foord and UFIT and thanks to you Alan for running this interview and for the great website you have developed on climbing and mountaineering!

Best of luck Axe. we will be following and rooting for you.

4 Responses to “Everest 2012 Interview with the Axe”