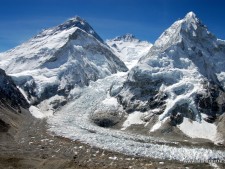 There were many summits on May 19 as expected. The winds seemed low in the morning but picked up as the day progressed. There were reports of delays at the Hilary Step and over on the North due to crowds.

I have updated the location table based on information available and estimated some in the “other” category. We know there were several large teams on the South and Chinese on the North but there is no way of tracking them.

The normal reporting practice on the South is once the team summits, ask they report the results to the Nepal Ministry of Tourism and they eventually publish a press release or report – this can take days or months for the official report. Hopefully the team you are interested in will publish something through their hometown press if/when they summit.

It was confirmed that Ueli Steck and Nepalese Tenzing reached the summit on May 18, ed 2012 without using oxygen.

The early reports are mostly from the traditional commercial teams. They had good success last night. Between Adventure Consultants, IMG and Peak Freaks, they put 45 people on the summit. All have a second wave either at Camp 3 going up today or base camp hoping to summit around May 25. These expeditions listed the names of their summiters on their websites.

Sagarmatha Giryarohan Sanstha and Giripremi — the two Pune groups — announced success of their respective expeditions on their Facebook pages. It was a bitter-sweet success for Sagarmatha group, though, as it lost one of its members, Ramesh Gulave, to altitude-related sickness in an earlier stage of the expedition a few days ago. Eight climbers from Giripremi, including Tekraj Adhikari and Krishna Dhokale, and four from Sagarmatha Giryarohan — Shrihari Tapkir, Sagar Palkar, Balaji Mane and Anand Bansode — reached the summit from the `South Col’ route, from Nepal.

We had the weather day chosen by Michael Fagin and it was perfect including the predicted strong summit winds. Grant with Pasang Nima, Mila with Pasang Ongcho, Mark D with Ang Gelu, Ian with Kami Neru, Mark H with Chhongba and myself all reached the summit this morning at different times. Unfortunately Margaret turned around after about 10 hours due to the nagging cough that has been hindering her performance recently. Margaret has already climbed Everest from the south side as well as Manaslu.

Grant Rawlinson with that team posted an emotionally drained audio post just after his summit.

More to come, including Lhotse. Alpine Ascents has several climbers wanting to get Everest and Lhotse within 24 hours:

Alpine Ascents Guide Ben Jones is in the region doing a little personal high altitude climbing. He is currently fixing lines on Lhotse with Damion Benegas. They departed early this morning and are making great progress, fixing the lines as they go. At 27,940 feet, Lhotse is the 4th highest mountain in the world, and its proximity to Mt. Everest provides the opportunity to link two 8,000 meter peaks in under 24 hours. Currently only three people have managed the task; Alpines Ascents Guides Garrett Madison and Mike Horst, and Alpine Ascents climber Tom Halliday. Garrett Madison is hoping to repeat the feat this year along with climbers Leanna Shuttleworth and Mark Shuttleworth. They would become the 4th and 5th people to do so and Leanna would be the first female to climb two 8,000 meter peaks in under 24 hours.

My sincere congratulations to all who climbed yesterday in what sounds like difficult conditions.