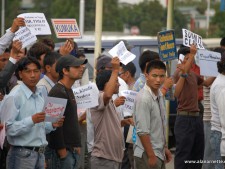 Transitions: where an end meets a beginning; where a beginning meets an end. This is when emotions are fueled, salve relationships defined, sense awoken. Births, deaths, marriages, divorces, beaches and oceans, mountains and plains.

This weekend marks a major transition for our Everest 2014 climbers and their families. The dreaming has ended, the climbing is about to begin.

All around the globe, a climber holds on tight to a special person, looks into their eyes and says good-bye, Sayounara, au revoir, auf Wiedersehen or perhaps see you soon. No matter the language the feeling is the same, a journey begins anew.

Arriving in Kathmandu, they will meet their teammates for the first time. They will have a grateful smile upon seeing their two duffel bags on the creaky conveyor belt. A long held breath will release as their passport receives the 90-day visa from the customs officer who never makes eye contact. Their senses will go into overload as they walk out of the airport and see hundreds of signs with hundreds of names but only one will count.

Driving to their hotel, the climber begins the adjustment from whatever they once had to a new one, a new start, a new journey. They will never be the same.

For the past several months many of their friends, and some strangers, upon hearing they were going to Everest asked about crowds, garbage, ladders, costs, and of course, deaths. The climber tried to explain what they knew but the other side had the latest facts as portrayed by the evening news, all in 60 seconds.

But all of that no longer matters. They are in Kathmandu, wishing they had worn shorts, not jeans as the humidity seeps into their pores. A cow sits in the middle of a four lane road, quietly chewing its cud. A tiny car with a huge horn blasts by, the cow doesn’t blink. If there was a picture of inner serenity, this is an example. The climber takes notice.

Looking for relief from jet lag, the climber checks into the hotel. A tiny man smaller than the duffel bag, hoists it on his shoulder and carries it up four flights of stairs. He returns while you are still checking in to take up the second bag. You meet him in your room where he takes your US five dollar bill with gratitude, and sweat dripping off his brow.

Your left leg twitches like it was on fire. Your heart races as your eyes blink. You struggle for breath. You were on the Lhotse Face. It was icy, very slick. The storm had moved in creating a whiteout. All you could see was your yellow boot on the blue-white ice. Your goggles are in your pack but you don’t want to stop to get them, a mistake.

The thin white safety line marks the way ahead. You are separated from your teammates, your Sherpa. You are alone. You unclip the carabiner to move above an anchor when it happened. Your left foot slipped on the hard ice, your crampons didn’t gain the needed. You fall downwards, you grab for the rope, your icy glove is no match. The angle is steep, sharp, you gain speed, faster, faster as you pass another climber who can only turn her head to watch as you fly by.

A dream. A nightmare. You wake up in a sweat. Welcome to Kathmandu.