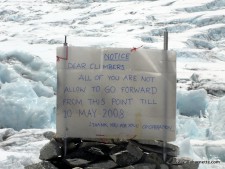 In my 12 years of covering Everest, I have never seen so much early interest from the mainstream media, not to mention climbing media. They usually wait until there is a death or a disaster to cover Everest. So what is going on this year and what does  it mean for this year’s climbers?

A lot of the interest goes back to the fight on the Lhotse Face last year between Simone Moro, Ueli Steck and the Sherpas fixing the rope for the commercial teams. This incident was analyzed, scrutinized, plagiarized and hypeized (not sure about that last word) so much that the facts may have been lost, much less any hint of what it meant.

My bottom line today remains similar to what I thought when it first happened – egos out of control and not an indication of any long term or systemic issues between Westerners and Sherpas. The public ate this story up with a passion – it seems everyone loves a good fight – especially if it is 22,000′ on a mountain side! You can read my 2013 recap for the full story.

The Nepal Ministry of Tourism, feeling the heat from the bad press, must have felt inspired to make a public statement that they were in control of their mountain.  So they have been leaking a series of policy changes throughout the last six months. The changes have been confusing and not well thought out, even if their intent was noble.

Just after the 2013 season, they floated an idea to put up a ladder on the Hillary Step to speed up climbers. This same idea was re-floated a couple of weeks ago. I think it is a bad, bad idea and wrote an entire post on it. But basically it will not speed up climbers or solve any crowding issues.

To put it in perspective, there have been 2,450 north side summits, less than 10 were accomplished without using the ladder on the 2nd Step. There would be almost no summits today on the north without that ladder.

Of the 4,416 summits on the south side, none were accomplished using a ladder at the Hillary Step since it has never been there.  A qualified climber can easily overcome the Hillary Step in five minutes, and half that on the descent. A ladder is not needed and will increase the mis-perception that Everest is easy thus increasing risks, deaths and attracting ill-prepared climbers in my opinion.

The primary reason for high traffic at the Hillary Step is the weather, i.e. high winds prevent suitable summit days forcing climbers into a few days instead of spreading them out over many days. There are normally 8 to 12 summit days. In 2012 when crowds were severe at the Hillary Step, there were less than five suitable weather days in the entire season to attempt a summit forcing hundreds of climbers into making their attempt in a short window.

Next up was huge headlines saying that Nepal was lowering the permit fees from $25,000 to $11,000. The mainstream media, and most climbing media who should have known better, parroted the headline giving the impression that Nepal had done the climbing world a great favor.

The truth is they raised the virtual permit fee from $10,000 to $11,000 per climber. Again, I go into all the details on a separate post. Actually I agree with increasing the permit fee but not misleading the public. I updated my annual Cost to Climb Everest post with these new numbers.

Then there was the announcement that Nepal was going to force climbers to become trash collectors by requiring they exit Base Camp at the end of the season with 18 pounds of trash they had collected above Base Camp that was not their’s. The headlines screamed that Everest was the world’s largest trash dump and climbers were selfish litters. It even made the evening TV news.

But a couple of weeks ago, they backtracked saying they only need to bring their own trash down. Climbers now getting permits are being told this is an “experiment” and no one will be fined or banned. Yes, cleaning up after oneself is good. I just wish they would include solid human waste via Clean Mountain Cans like on Denali or Aconcagua.

Along with the trash announcement was a requirement that climbers attend a “special pre-orientation programme for the climbers and their helpers to alert them on ‘dos and don’ts’ to maintain peace in the region.” Is this really needed or should they brief climbers on waste management and give them the tools like blue bags and clean mountain cans?

Just last week was an announcement that double ropes would be put in the bottle neck areas including the Lhotse Face, Yellow Band, Geneva Spur and Hillary Step (what happened to the ladder?). The only thing missing from the announcement was the fact that dual lines have been in many of these same areas for years.

A lot of this reminds me of the confusion back in 2008 when the Chinese gave Nepal a multi-million dollar incentive to keep climbers off the summit until they could take the Olympic Torch there. Again, there were last minutes rules about communications, who could climb, when and where. There was massive confusion and in the end, armed guards patrolled areas from Base Camp to Camp 2 creating an unfriendly environment.

In addition to all the policy changes, several stunts are taking place that have attracted the media’s attention. The grandest is Joby Ogwyn’s attempt to fly off the summit in a wingsuit flight. The Discovery Channel will televise it live. There are several other movies being made, one is very deserving about the Sherpas’ role on Everest.

You now, Everest is located on the Nepal boarder. It is their country and they can choose to run it however they see fit. Of course the flip side is that Everest brings in $3M to $4M of hard currency to one of the poorest countries on the planet each year.

As I look at all these changes, many are good ideas with excellent intentions: safety, cleanliness, order – how can you argue with that? That said, I don’t think many 2014 climbers will feel any real impact on their plans.

I would just ask the Ministry and the Expedition Operators Association of Nepal (EAO) to consider real measures that would impact the climbing environment on Everest: limiting climbers, qualifying guides and qualifying climbers before imposing rules that cannot be enforced for the sake of window dressing.

You have to be certified to scuba dive, or qualify for elite events such as the Boston Marathon or the Kona Ironman competition but not to climb the world’s highest mountain? 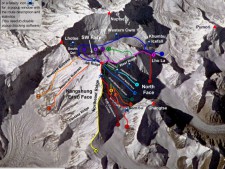 The EAO could reduce the crowds and increase the challenge by working to open up new routes. There are 18 named routes on Everest but only two are used regularly. The others are difficult, dangerous and require expert skills but could be promoted to qualified climbers.

Perhaps the EAO could take a hard look at making the West Ridge Direct safer and more accessible for very advanced and extremely qualified climbers. There is money to be made there.

But the ultimate solution is for each climber to exercise personal responsibility. This means cleaning up their own mess, and others if possible. Don’t attempt Everest unless you have the experience and skills. Don’t give your money to a guide who has no business being on Everest.

Bottom line for me is that Everest is popular and always will be. For all the critics, it is milestone in many people’s lives and deserves congratulations and respect.

Some say Everest is past it’s prime, occupied by tourist and wannabes. It has lost it’s magic with long lines, litter and politics. Perhaps, but don’t tell someone who has been there that Everest was not magic.

I’m optimistic that Everest will always be magic the same way Rainer, Denali, Mont Blanc and other popular mountains are today for many people. Yes, there will be crowds, the occasional fight and ongoing politics but the climber going with the right preparation, the right team and the right expectations will be rewarded with the experience of a lifetime.