The winter Everest summit team is taking the normal spring schedule for their summit bid as they have good weather at the moment but it is deteriorating slightly. The Polish K2 team is resting at base camp.

See this post for full background on the K2 and Everest expeditions and the history of winter attempts on the highest two mountains on Earth. Both expeditions need to summit no later than the spring equinox on March 20, 2018, at 0:15 PKT for K2 and 18:00 NPT for Everest to meet a winter summit definition.

OK, now that the Everest team is on their summit push and the K2 team may start soon, it all comes down to weather. Many websites and media reports are using computer generated forecasts from Mountain Forecast and Meteoexploration but how accurate are these online resources? In my experience as a climber, the daily weather forecasts can vary widely from what really happens on the mountain. One phenomenon is the occurrence of micro bands. This is where only a narrow section of altitude is hit with strong winds while the other levels are calm. I got hit on Camp 3 on the Lhotse Face in 2011 by one of these. Camp 2 and the South Col reported somewhat lite weather, while we were inside our tent, holding it up with our hands to keep it from blowing away. The storm lasted for 12 hours then disappeared as quickly as it arrived.

In previous years of covering Everest, I asked Michael Fagin of everestweather.com his opinion of these types of forecasts. Michael has provide professional weather forecasts for Everest expeditions for over a decade.

Q: Some forecasts are posted on the web, the so called grid forecasts. What are these and who accurate are they?

These grid forecasts take what the weather conditions will be for an exact latitude longitude coordinate. So the grid forecast will give you the exact wind speed for the coordinates for Everest. I have found that the problem with these forecasts is if the forecast is off say 200 miles or so that this can make for an extremely inaccurate forecast. For example. Let us say that the grid forecasts  says Everest summit winds will be 30 knots and the grid forecasts 70 knot winds several hundred miles to the north of Everest. It is not uncommon for the actual forecast to be off by several hundred miles and the real time winds can easily be at 70 knots over Everest. So the forecast of 30 knot wind over Everest vs. real time winds of 70 knots is a big problem. Thus, it is important to get some weather professional analyzing the forecast models and explaining to expedition groups what can happen

Today, I asked Chris Tomer who also provides forecast for climbers through Tomer Weather Solutions  what he sees for Everest right now:

The big drop in summit wind is still there SAT AM and again SUN AM.  But it’s bookended by strong jet stream wind FRI and MON. The summit air temp of -35F on SAT AM.

I noted in a recent interview with K2 expedition leader Krzysztof Wielicki, that he is getting several forecasts. I assume one of those is from a professional service and has human interpretation. The same for Txikon and crew.

The entire Polish team is back at base camp resting. Denis Urubko posted a nice video of he and Adam climbing the Black Pyramid and in  some of the upper Camps. Note melting water, this becomes one of the most critical parts of climbing a big mountain and takes a long time at these altitudes.

Alex Txikon, Muhammad Ali Sadpara and team are now at Camp 2, 6500m/21,325′, targeting a weekend summit date. They took a rest day today 22 Feb and will move up the Lhotse Face to Camp 3 on the 23 where they will spend the night. Next is to the South Col to sleep for a few hours then go for the summit, hoping to top out around dawn on Sunday, 25 February. Of course this schedule can change due to weather, snow conditions, health, etc. High winds are expected back on the summit on Sunday night.

It is clear that Alex will not be using supplemental oxygen, that is the point of this winter attempt. I understand the Sherpas will be on O’s to serve as a safety net. It’s unclear if Sadpara will use O’s. 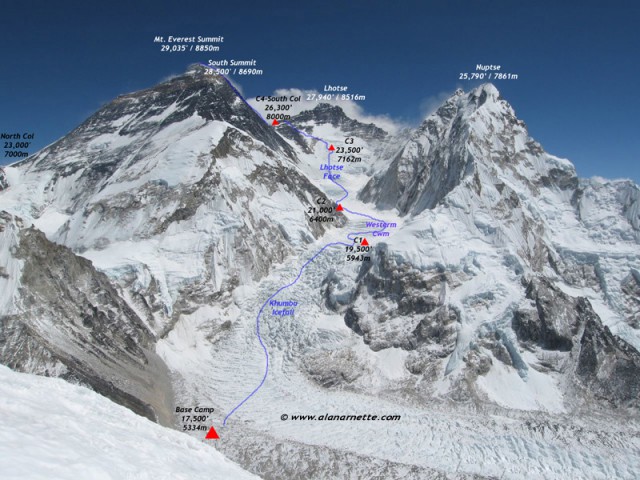 Some people have asked about the dates I showed on yesterday’s table of winter summits as reported by the Himalaya Database with winter summits before the official start of winter, December 21, the winter solstice. I contacted Richard Salisbury, who runs the database part of the Himalayan Database and he said:

The original start of the winter season set forth by the Nepal Ministry of Tourism was December 1. Autumn-permitted teams were supposed to end their climbs by mid-November (there was a two-week gap where no climbing was permitted). Winter-permitted teams were not allowed to go above BC before December 1 (although they could arrive at BC before that date).

We have continued to use December 1 as the start of winter season.

Choosing between Dec 1 and Dec 21 is really quite arbitrary.

This is the report: