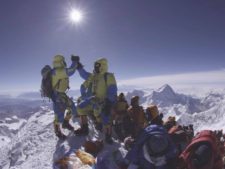 It was day four of Summit Central on #Everest2018 with more than 100 combined summits from both sides. Again the weather was holding as it has been but a bit of snow is expected over the weekend up high.

More Oxygen Problems – On South Now, Alpenglow going back up

On their summit push, Kenton Cool and Ben Fogel also experienced regulator problems identical to Alpenglow’s on the Tibet side. Ben Fogel said on Instagram:

The only blight on the Everest expedition has been a major problem with the Oxygen delivery system. At 8000m plus most people need supplemental oxygen in the thin air. At 8100m, just north of the Balcony, mine exploded. Luckily for me Ming Dorjee Sherpa was able to give me his mask, regulator and cylinder and he returned to the South Col without O2. Then our cameraman’s regulator burst at 8500m and this time Ang Thindu (in tears) volunteered his bottle and regulator. As if that wasn’t bad enough, at 8800m, at a life threatening height, My second regulator exploded on my back. To say it was terrifying is an understatement. My heart sank. If I was scuba diving I would have been dead. Luckily, the heroics of @kentoncool, meant that he gave me his only cylinder and mask. Kenton was able to descend to the South Col for an emergency mask. In total we lost 4 regulators and we met many other teams forced to abandon their attempts due to the problem. It seems to be a major issue on Everest his year and I hope we get to the bottom of the problem before someone loses their life. I’d like to publicly thank the selfless heroics of Ang Thindu Sherpa and Ming Dorjee Sherpa.

Aplenglow
While he said he met “we met many other teams forced to abandon their attempts due to the problem” I only know about three teams not the North and Cool’s on the South. I’m sure we will hear more. An update on Alpenglow, Adrain Ballinger contacted me 18 May at 6:30 pm Nepal time to say the main team would not try agin but his small team that recently summited Cho Oyu would, “Also just wanted to keep you in loop. Main team left for BC today.  They had a great fight but will not make another attempt. Our small cho/e team will try again with german regs from kari and some well tested summit regs from hiro. Oxygen from Indian and Japanese teams. And only 1 camp (we will use C2 and skip C1 and C3) to minimize work for our sherpa teammates. We head up tomorrow and hope to summit on 20th!”

I spoke with Neil Greenwood at 7:30 pm Nepal time 18 May. He said he is confident they are moving towards understanding what caused the phenomenon and will be able to prevent it happening again. He continued “It is worth noting have been no regulator failures before or after May 15/16 when it appears a unique combination of temperatures and high atmospheric humidity have been the cause of the issue. Lukas Furtenbach, who first reported the failures to Neil,  reported very high humidity and Adrain Ballinger noted his team were climbing though cloud at the time of the failures.” Neil added that Alpenglow had multiple failures over a 30 to 45 minute timeframe, not the 3 minutes that was originally reported. He is traveling to Nepal to personally meet with the operators and retrieve all the regs for testing in his labs in the UK. One more note he added was that the climbing community needs to be aware that regulators can hiss and make noises when o-rings are broken or a reg is not attached properly to a cylinder and this is not the same issue.

7 Summits Club continued success for their second of three teams with 2 guides, 4 members and 4 Sherpas. Adventure Peaks with Ricky Munday and Patrick McNight “summited At 04:30hrs Nepali time and are now back down at Camp 3 and are continuing down to Camp 2. There was more wind and snow than expected, but it didn’t seem to slow them down too much. ” 28 year-old Illina Frankiv is reported to have summited by her partner and also an Everest summiter Neal Mueller. Also David Snow made the top in and in support of Sange Sherpa who had all 10 fingers amputated after his member refused to turn around last year. There is no update from Alyssa Azar.

Over on Dhaulagiri their summit push continues but with Carlos Soria at Camp 3 has abandoned his effort citing very high winds. This was his 9th attempt on Dhaulagiri. He only has this one and His to complete his dream of getting all 14 8000ers. It appears Ryan Kushner and his teammate Christopher are still at C3 hoping to make it.

Nadav Ben Yehuda (30) has been airlifted from 6,600 m on Kanchenjunga after he suffered severe frostbite on his legs. Chris Jenssen Burke reported on her blog that she, Pemba Geljen Sherpa, and Lakpa Sherpa of Expedition Base summited. Also, Russian climber Sergey Baranov and German climber Herbert Hellmuth summited at around 6:45 pm, 17 May. Chris has an extensive report on her blog where she describe more rope issues, poor weather and more. This was her 10th 8,000er.

Thomas Lämmle summited Makalu without supplemental oxygen and had no Sherpa support. He is now on Lhotse. David Liaño who ended his Kang attempt with no summit is now on Everest wanting it and Lhotse before heading to K2.

Looks like the summit teams may have several inches of snow over the next three days but the winds remain manageable. We’ll see what really happens. Several other teams are staged at the South Col and C3 on the North for early Saturday 19 May summits. Matt Moniz and Willie Benegas at at C3 Friday looking to summit Everest on the 20th and Lhotse on the 21st.  Matt’s mom, Dee is their Base Camp Manager!

Wishing all, luck and a positive experience.
Climb On!
Alan
Memories are Everything