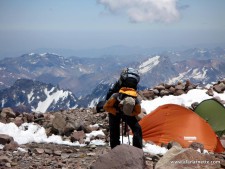 A horribly disturbing trend is showing all the signs of coming to full life this spring season across the world’s highest peaks. Thus far,  11 people have died on six 8000-meters peaks in Nepal and Tibet. And the main Everest pushes have not begun. About 110 people have summited thus far with another 700 to 800 on both sides going up next week.

I’ve been talking about the trend of inexperienced climbers with unqualified guides for many years now. My fear has been that with all the success seen on these big peaks, combined with operators offering low prices that it has in-fact attracted a new category of person who simply doesn’t know what they don’t know. Combine that with a lack of qualified support, when trouble happens it falls on the shoulders of a few to react. And often it is simply impossible.

As I will cover in this opinion piece, I believe there are three reasons for all these deaths: greed, ignorance and ego.

greed, noun: intense and selfish desire for something, especially wealth, power, or food.

For decades the big mountains were guided by mostly Western companies who had a system honed over years of using Western guides, having doctors at base camp and the same Sherpas each year. It was/is a tight knit team that could safely take mostly experienced clients safely to the summit and back. They charged high prices, $45,000 to $65,000. A few Nepali based guides had similar performance (and prices) and, while there were still deaths each year, around five, the deaths were viewed as part of the risk of mountaineering and not incompetence.

A pivotal moment in the Nepal guiding industry occurred after the 2014 ice serac release the killed 16 Sherpas in the Khumbu Icefall. It lit a smoldering fire in a few young Sherpas that had begun in 2012 when many Sherpa were killed on Manaslu. This younger generation felt they were being exploited, underpaid and they needed to take the mountains back from the western operators. At time around 80% of all 8000-meter summited were guided by foreign companies. Today, in 2019 that number has dropped to 20%.

These new companies competed on price. They had slick websites promoting their leadership with 5, 10, 15 or more Everest summits. They offered wifi, good food, spacious tents – in other words everything the western companies did, but at half the price. The market was there and reacted aggressively, especially from India and China.

The low cost came from the new Nepali/Sherpa guides paying their own staff lower wages than the western operators. They did not use expensive (and experienced) western guides. They felt they didn’t need training or excess staffing. They simply offered a potential client a spot on the permit, a tent on the mountain and a Sherpa guide. Little vetting and little oversight.

The model worked well – as far as getting business.

ignorance, noun: lack of knowledge or information: he acted in ignorance of basic procedures.

“If you want to experience what it feels like to be on the highest point on the planet and have strong economic background to compensate for your old age, weak physical condition or your fear of risks, you can sign up for the VVIP Mount Everest Expedition Service offered by Seven Summit Treks and Expeditions.”

They read the stories and articles that  “Everest had a sidewalk to the summit.” And  “Anyone can summit.” They believed the marketing of Nepal the every Sherpa was a “Sherpa Guide.” – something the Nepal Ministry of Tourism instituted to address growing safety concerns. It was like saying every person in a plane is a pilot.

The operators began to increase the staffing, drawing new Sherpas or Nepal ethnic groups that had little to no experience on 8000-meter peaks. The clients didn’t understand the distinction. They never did their own research, only became excited to join the ranks of Messner, Viesturs and Bonnington. A false equivalency if there ever was one.

When told they needed to climb a series of ever-higher, more difficult peaks before their first 8000er or Everest, they scoffed and said they didn’t have the time or money for such an investment. They Googled “low-cost Everest climb” or for Cho Oyu, Annapurna, Makalu, Kanchenjunga or Lhotse and received 43 million hits in 0.84 seconds. Their hearts raced that they could climb Everest and not have to take out a second mortgage their house.

The death rate on Everest has gone down dramatically this century but that is because of the old-school Western operators that pioneered the commercial model of using known routes, reliable oxygen, qualified support and vetted potential clients as to temperament and experience. But even the best guides shied away from the extremely difficult 8000ers: Annapurna, Makalu, Kanchenjunga, Dhaulagiri, K2. They knew there were limits to their formula. If they did run those trips, they were small, tightly controlled and highly experienced.

But this new generation of climbers, eager to bag the top and brag back home, didn’t know enough to understand the difference between climbing Everest and Makalu. They joined a random team of individuals with shared logistics for an independent climb. They didn’t understand the word “independent.” And had no experience to evaluate the risks.

ego, noun: a person’s sense of self-esteem or self-importance: a boost to my ego.

Climbing mountains requires a higher than usual ego. You must have high confidence in yourself and the strength to push hard. This year, 2019, has seen deaths of some of the finest young climbers in a generation. On peaks like Nanga Parbat or Mount Howse in Canada. These young men were pushing the limits on routes known for the challenge, and the danger. They knew what they were getting into and choose to take the risk.

Similar, this year, 2019, on the 8000ers there have been deaths of experienced climbers attempting, and sometimes summiting, while pushing the limits. Their websites and social media (and occasional sponsor) wrote about their conquests using terms like  “without supplemental oxygen,” or  “no Sherpa support,” or “independent and unsupported.” The climbing community put these feats on an alter, dismissing anyone who used oxygen, support or climbed on a commercial team.

This feedback loop encouraged more risks, and climbers who had good skills, but not enough natural ability or genetic gifts, to attempt these high risk climbs in “style,” joined an independent team and they died.

They have no problem joining a team. Today, there are plenty of operators willing to take their money, put them on the permit, take their gear to a base camp (or better yet helicopter everything in) and let them go their own way. After all, as I was told by one operator this year, “Its not our job to turn a client back.”

Everyone has a piece of this.

Operators need to mature into responsible companies that understand the difference between simply taking money for a dangerous product and taking responsibility for a person’s life with the proper support structure. In the United States, the National Park Service awards “guiding concessions” to handful of companies on peaks like Denali. It’s an expensive, highly regulated process that ensures those who call themselves guides, are truly guides.

Climbers need to wake up and understand that climbing a big peak like Everest or K2 or Makalu is extremely risky. They need to stop believing just because they are with a “Sherpa Guide” who has summited Everest ten times that they will be rescued if they get in trouble. Even the strongest Sherpa cannot take an incapacitated person lower by themselves or expect extra oxygen to be delivered to 8,400-meters on a moment’s notice. And helicopters have their limits, as do rescue policies and GPS devices. The climber themselves, need to take responsibility and gain the proper experience, knowledge and vet the company they are putting their life on the line with.

Staying with the Denali comparison, the NPS allows “independent” climbers, even true solo ones, but they spend a couple of hours interviewing you, discussing your experience, the risks and the support options before they issue you a permit. In Nepal, you pay an agency, who takes a cut, and you get your permit – no questions asked.

Even with all these deaths, I don’t expect Nepal to change. Oh, yes we will hear all sorts of announcements after this season is over. The press will mimic the rhetoric and the public will be swayed that improvements are in the works. And nothing will change.

As long as the combination of greed, ignorance and ego work hand in hand to trick people, and companies, into believing what they want to, inexcusable deaths will continue in the mountains.

My sincere condolences to all the families of the deceased. My sincere wish for safe experience to all those headed up. And for the future climbers, please use this season as a learning opportunity.

22 Responses to “Too Many Deaths – Opinion”