Teams are staged at high camps just waiting for the green light from their weather forecasters. It is a mixed bag on both sides with howling winds on the Tibet side, and relative calm on the Nepal where the first summit may happen on Monday, May 20. The ropes are still not to the summit on the Tibet side.

Now that we are a day or two away from the next window, many questions remain. The biggest question is just how long will this wind be. In other words, how long will the winds stay low per what each guide considers a safe speed before leading their members higher. Most consider 30mph/48kph to be their upper limit, others are a bit more allowing for the difficulty they put their members through!

A few days ago the winds after the 20th looked to be calm for as long as 5, even 9 days, but now may split into two separate ones. So this means some teams will push hard to get the summit on May 21/22/23 and others will go during May 26/27/28. In any event, we are getting closer to the end of May and the end of the season for most. It’s a tense time.

I do my best to track the teams I can during the summit push but don’t have direct communication with any of them or know the status of any individual. You see what I see on  the tracker table.

IMG on the Nepal side sums it up well for everyone as of Saturday, May 18:

The winds for tomorrow are forecasted to be dropping, which can make the Cwm quite warm when the sun hits, so our climbers at Camp 1 will leave early tomorrow morning to beat the heat on the way to Camp 2. The climbers who went all the way up to Camp 2 had a great day of climbing today and are looking forward to a rest day tomorrow. We are keeping our eyes on the weather forecast, which continues to have the winds dropping over the next few days.

Jake Norton, expert mountaineer, photographer and general great guy, made another in his series of outstanding updates as he is on the Tibet side. In this one he finds a piece of “trash”. Please read his entire short post on Facebook:

A simple piece of wire. Looks like trash, and in many ways it is, mere jetsam from days past. But, it is much more, with a story. In 1933, the 4th British Mount Everest Expedition ran telephone wire some 14 miles from Basecamp up to Camp IV at the North Col to enable better communications for the team. Bits and pieces of this wire artifact have been popping out along the route for the 20 years I’ve been climbing here. Trash, yes, but also a story, a connection to the past, a reminder of those who came before. 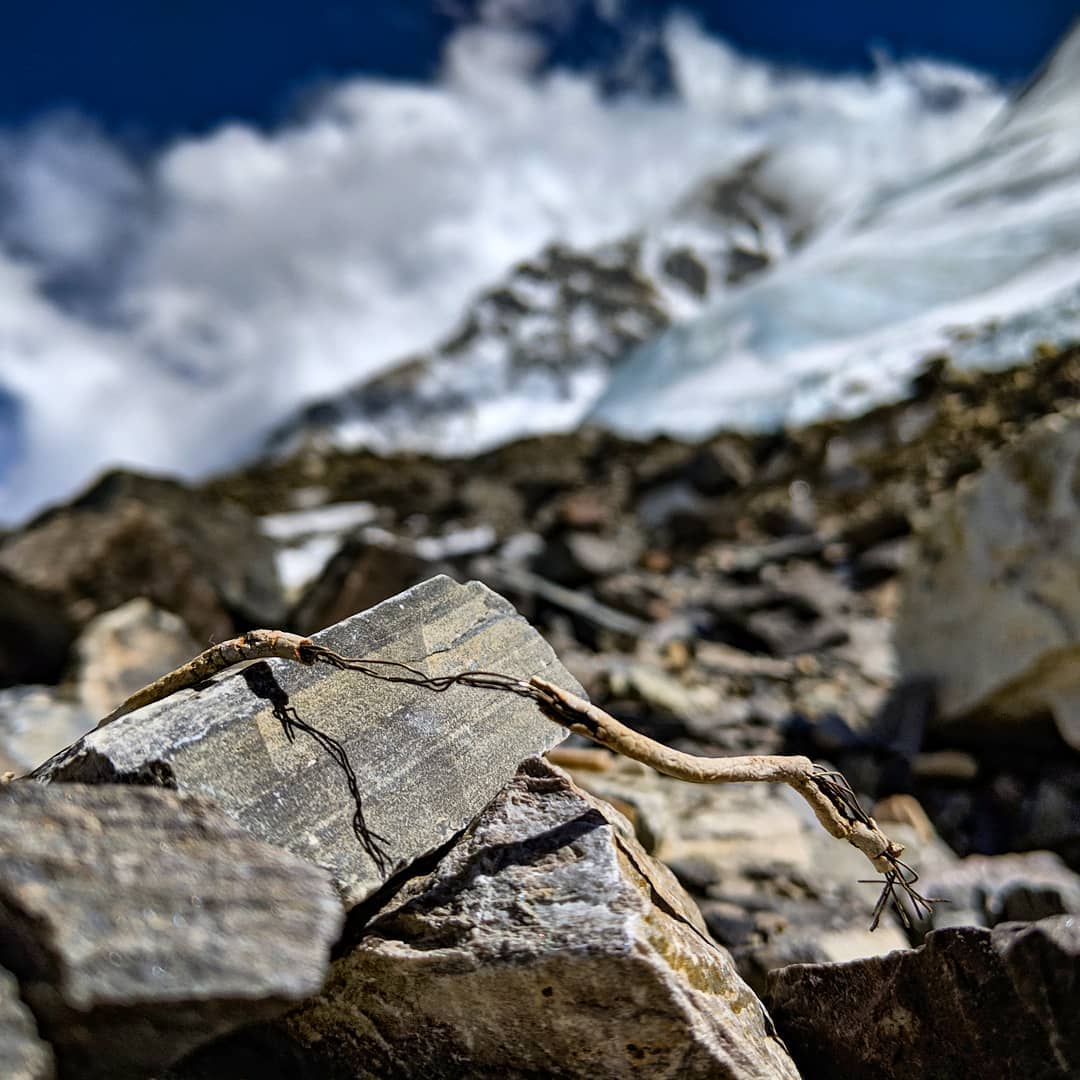 Nepal – Staged at C2, Waiting for No Winds

Base Camp is just about empty as many teams are targeting their summit bid for May 21 but it may be a day or two later. They  include:

Adventure Consultants reported on Friday morning there were 2 large groups, one with 40 people at Crampon Point at the base of the Khumbu Icefall. Everyone is headed to Camp 2 for the next move. If you look at the tracker table, you can visually see how empty EBC is.

This morning at 2:08am our team started their journey from Everest Base Camp (5300m) for final summit push and arrived at camp 2 (6300m) around 1pm.  We wish them all them a very good luck. We want to see you happy, healthy and successful!!! May Buddha always bless you!

As did Mingma Sherpas’ Imagine Nepal who will probably be the first team to summit in this window on Monday morning, May 20.

Today all our 8 clients reached camp3. Tomorrow we’ll climb to camp4 and make final summit push. 2 Greece women , 1 Indian boy and 5 Chinese are doing great and it looks we are the single team try Everest on 20 may.

I liked this from Peter Wilson with CTSS:

The time has come.

This afternoon we received our weather forecasts and conditions look favourable for an attempt on the top later in the week. Tomorrow morning we ask Sagarmatha her blessing for one last journey along her side, as we set back off up the mountain with the aim of reaching the summit.

They say your goals should frighten you. Well, I can unashamedly say this mountain scares the shit out of me. However, I’ve prepared for years, I’ve surrounded myself with the best and I feel I’m more than ready.

I’m extremely proud that I’ve been able to put myself into position to attempt Mt Everest. Who would of thought a boy from Gilgandra, may have the opportunity to stand on the roof of the world.

Thank you all for the well wishes, across all platforms. I haven’t been able to respond to many but I’ve read most and appreciate the effort everyone has gone to. I’ll be harnessing all your positive thoughts over the coming week.

For anyone who wants to make themselves nervous, the CTSS blog will be keeping track of the summit push throughout the week and update where we all are on the mountain.

Let’s get this done.

Tibet – Holding at CBC, Staged at ABC, Waiting on Winds and Ropes

Some teams are staged at Advanced Base Camp for their summit push as the rope fixers are expected too go back at work in what is still difficult conditions. Most of these teams continue to look at their summit bid for May 21 but it may be a day or two later. The teams at ABC include:

Adrian Ballinger posted this short video from today as they head towards Camp 2 at 25,500-feet/7772- meters.

But Scott Woolums retreated back to CBC due to the winds:

Quick Update from the North Side. We have descended to bc, not real comfortable with the short window on 23 and maybe 24. By the 25th winds again shoot up out of limits. A number of factors helped our decision to just wait till after the rush up behind the rope fixing team. Several factors have helped us make our decision to wait easier. Actually it’s a very tough call, to wait and watch half of camp head up towards abc. Everyone is still counting on the fixed lines going in within the next 4 days. The Chinese fixing team still have not left bc! They are saying they could have ropes to the summit on 22nd.

We’re both feeling good, actually enjoying being at base camp for a few more days, then up for May 26, 27 or 28. We should have more stable conditions, warmer, and far less crowded. It’s looking like most people will try for one of two days which will be interesting. Will update when we leave camp. For now, good luck to all!