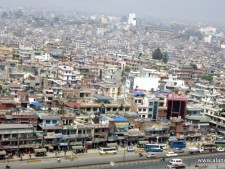 Arriving in Kathmandu is when many people feel their adventure begins. A city with a long history dating to 185 AD, the capital of Nepal has grown to over 2.5 million residents in the Kathmandu Valley. Sadly the streets are congested and the city has one of the worse air quality indexes in the world. However, it remains a city rich in culture and deserving of a day or two for tourism.

Climbers, trekkers, and tourists fly into the only international airport currently in Nepal (others are under construction) met by a recently renovated airport and extended runways for improved safety. Arriving from Thailand, Hong Kong, Delhi, Instanbul, Qatar Abu Dubai, and scores more countries, visitors step off their jet onto the humid tarmac, often greeted by a monkey sitting atop the airport terminal building.

I can easily remember my first experience in 1997 when I made a trek to Everest Base Camp. I was wide-eyed and excited to visit this mountain kingdom. I felt the same way on my last trip in 2017. While eager to get to the Annapurna or Manaslu regions or the Khumbu, taking a couple of days to recover from jetlag serves you well.

This is a collage of memories from 13 trips to Nepal.

I squinted as I peered out the window of the Thai jet. TG319 made a sharp left turn and there she was, Chomolungma. The summit was the same flight level as the Boeing 777, about 29,000 feet, as we descended towards Kathmandu.

“Ladies and gentlemen. We will be landing at Tribhuvan International Airport in 30 minutes.” My heart picked up a beat. I switched between the window view and the tiny TV screen in the seatback monitoring our progress and inspecting the progress and expansion of the capital city over the years.

The touchdown was smooth as the brakes worked hard to stop the 500,000-pound flying machine slowing from 172 mph. Peering out the small airplane windows, The red brick airport terminal, hosted multiple planes from around the world parked outside the terminal’s glass doors. As the flight crew opened the doors, the fuselage became engulfed in warm, moist air.

I had to smile as we were headed onto a double bus for a 30-second ride from the plane stairs to the terminal glass doors. Perhaps a jobs program for unemployed bus drivers?

I walked the long clean hallways to the customs area.  Inside the large wood-paneled square room, a row of desks occupied the right side, the “Visa on Demand” booth directly in front, and several stand-up writing desks to the left to fill out forms. I had completed my forms online but still had to pay $125 for a 90-day visa. Visa in hand I navigated the Disneyland-like winding line for my turn. The stone-faced officers always made me nervous.

With a blue visa stamp in my passport and a handful of yellow and blue receipts for who-knows-what, I followed the masses to the luggage pickup area. Amazingly, in all my travels, I’ve never lost a duffle on a climb going over and this was no exception. First big red, then the black Gregory bag I’ve used for 20 years lumbered underneath the black vinyl bands pretending to keep the warm air out of the unairconditioned room. 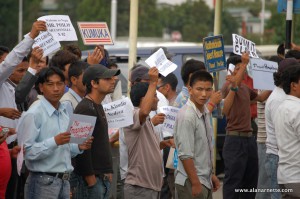 Now used to this part of the trip, I grabbed a dolly, politely ignoring the luggage handlers asking $20 for a 20-foot walk to the curb, and pushed the trolly myself looking for a sign with my name. 100 men in smart trousers and clean short-sleeved shirts lined up across a small roadway ready to take their charges to the hotel.

“Alan Arnette – Hotel Tibet” I smiled again. Making eye contact, before I knew it the trolly was whisked away and a wonderful smelling yellow and gold flower lei was wrapped around my neck. Sweat began pouring down my back. I jumped in the small van, pleased the air conditioner was running a full speed. The driver turned his head and smiled, “Namaste.”

I know what to expect when driving the streets of Kathmandu but still enjoy the ride. The colorful store signs, the variety of people walking or riding bikes, the crazy traffic that seems to be out of control but has the masterful coordination of a Bolshoi Ballet, and of course the cows chewing their cud in the middle of the roads.

After a night recovering from jetlag, a tourist day was in order. I took a tour during my first visit in 1997 when trekking to EBC but did again in 2015 when I was there for Lhotse. Sadly that trip ended with the 7.8 magnitude earthquake that took thousands of lives.

Our first stop was to the Pashupatinath Temple where both Hindus and Buddhists take their dead for cremation ceremonies. Everything is out in the public and the families are accustomed to having tourists and locals watch the ceremonies complete with camera in hand.

If it is the death of a mother, the youngest son leads the ceremony, if the father, then the oldest son takes charge. The total cost is between $40 to $60, a lot of money for many of these families. It is believed that those who die in Pashupatinath Temple are reborn as a human, regardless of any misconduct that could worsen their karma.

The dead are cremated within 24 hours of death. The body is lovingly cleaned, sometimes painted before being wrapped in white cloth and gently laid on a pyre of wood. The son then takes a flaming torch, circles the body many times before setting the structure aflame. It takes about three hours to complete and the ashes are spread into the Bagmati River which eventually joins the Ganges in India. 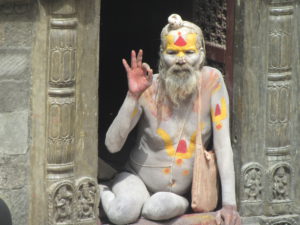 Posing for pictures in the temple area are Sadhus, wandering ascetic yogis, who are trying to acquire liberation from the cycle of death and rebirth by meditating. They are quite eager to pose for tourists in exchange for a small donation.

The next stop was to one of the largest stupas in South Asia,  Boudhanath. It has become the focal point of Tibetan Buddhism in Nepal. With April 3, the last day of the full moon, and the start of the Nepal new year around the corner, the Boudhanath was full of families praying for their dead of the past year. They circled all three levels of the stupa.

The air was full of smoke and incense and the sound of praying monks, clanging bells, and announcements over a loudspeaker competed for the sensory overload. Again, abject poverty was obvious with many handicapped people begging for money.

Prayer wheels encased in the lower wall made for more crowds as many people, locals and tourist alike circled the base spinning each wheel

This afternoon, we returned to the hotel to do our final pack and will leave early tomorrow morning for Lukla.

So, a good last day in Kathmandu with vivid reminders of the circle of life. Sights sounds, and smells to last a lifetime.

6 Responses to “Everest 2021: Sights and Sounds of Kathmandu”