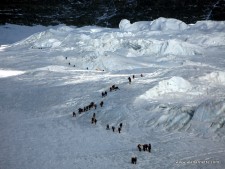 The final week in May is always special in the Khumbu – the end of the Everest climbing season. Sherpa families anxiously awaiting their loved ones to return from the time honored role of leading Westerners to the top of the world.

Many Westerners are reflecting on what happened to them over the previous 7 weeks and a few hardy ones waited anxiously for their chance; perhaps the last of the spring season.

With this back drop, on a normal year climbers would confidently began the climb towards the South Col and North Col. But this has not been a normal year. Only 7 days ago, one of the worst nights in Everest history took 6 lives combined on both sides. It shook the Everest community to it’s core but also took center stage on the world press.

Story after story warned of another death climb this weekend. Headlines lead with the story of over crowding, bad weather and unnecessary risks. The teams left their base camps taking it all in stride and focused on their task at hand.

With all the weather services aligning around May 23-25 as a low wind period, Thursday and Friday emerged as the next, and potentially, last window of the spring 2012 season. The teams set out with determination and an increased sense of safety. The most experienced commercial teams positioned extra Sherpas at the High Camps with emergency oxygen and stood ready to lend assistance to their climbers.

The first wave of the period arrived early, lead by Kenton Cool with the Olympic Medal – he was taking it the summit and hopefully sending a live video to the BBC once there. He reached the summit but the computer froze – Kenton did not. He was followed by scores of climbers with about 90 reaching the summit Friday morning in good conditions. No lines were reported at the usual suspects. This was not reported widely by the press.

On Friday night it was round two and these climbers enjoyed perhaps the weather of the entire season – no winds, clear skies, mild temps – for climbing Everest that is. The meteorologists should be proud of this prediction;they were spot on. Another estimated 100 made the top on Saturday morning with some arriving well before sunrise – a testament to their strength and the conditions. This was also not reported widely by the press, I think I see a pattern 🙂

These are some of teams who enjoyed success over the weekend:

Mike Moniz went on to summit Lhotse within 24 hours of his Everest summit. IMG Sherpa Chewang joined him. They made the summit 3:15!

Chad Kellogg, who was trying to climb from base camp to summit and back in under 36 hours or so, did not summit according to the SPOT GPS tracker he was carrying and a Tweet from his sponsor. Over on the North, another disappointment was when Hungary’s Dave Klein turned back on his no O’s north side attempt early Saturday morning.

Remaining a mystery to track, the NatGeo team did summit but their overall leader, Conrad Anker, said he was too tired to go with his team after helping fix lines but then changed his mind and summited without supplemental O’s on his own.

Similarly, the Eddie Bauer/First Ascent team provided little updates but Dave Hahn, leading the South Col climb, did. RMI reported, he and fellow guide Melissa Arnot did summit “with the team” but no other names were mentioned including Sherpas. Both of their respective West Ridge efforts were canceled due to icy conditions. Finally, Simone Moro, said he would go home and not attempt his No O’s climb or his Everest Lhotse Traverse.

One final note on the deaths for this update. According to Ganesh Thakuri, managing director of Utmost Adventure Trekking and Shriya Shah-Klorfine’s guide service, efforts to return the climber’s body who who died last weekend just below the Balcony came to a halt on Saturday as high winds stopped the team of 6 Sherpas from taking her further down than the South Col. It is uncertain they will be able to remove her body this season. My understanding is that the full recovery would cost about USD$25,000 and was helped by insurance.

Thus far there have no reports of incidents as climbers work their way back through the Icefall to base camp. This was a huge concern throughout this particular season. There are reports of the normal end of May slush, water run-off and melting but thus far the teams, including the Sherpas breaking down the high camps, are safely making their way through.

So we might see a few more attempts until the Icefall Doctors remove the ladders on the South on May 31, but I doubt it. Similarly there could be a few more efforts on the North. That said, I have learned to never say never on Everest!

My annuals season summary will be posted in a few days. Lot’s to talk about from rockfall to new routes to huge res, deaths and of course, many many summits.

If you have received value from my work during this 2012 Everest season, please consider a donation to one of these Alzheimer’s nonprofits, 100% for Alzheimer’s, none for me. thank you: