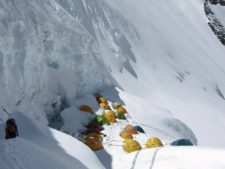 What was a good day of summits turned tragic as a climber died on the descent on the Nepal side. There were a number of summits on both sides, 27 summits (12 foreigners) summit from Nepal and 40+ (20 foreigners) from Tibet on Thursday 17 May.

Death on Nepal Side

Bashinformation Russia is reporting that Russian climber Rustem Amirov apparently began to have altitude sickness after he nearly summited Lhotse and no one could reach him in time. Apparently he had done only one acclimatization rotation after arriving in the beginning of May according to people who met him at EBC. Its reported he was found unconscious above camp 3 and Sherpas helped him down to camp 2 where he unfortunately passed away. He was on a permit with Nepal company, Monterosa. I confirmed his death with Nepal’s government representative at Everest Base Camp, Gyanendra Shrestha who added that he was on a large joint permit and not climbing with a Sherpa or on supplemental oxygen. Rustem’s wife posted his death on his Facebook page

Clever and strong as he was, he turned around just 100 meters from the summit due to bad weather. The bad weather slowed his decend. At some point above camp 3, he suffered from acute mountain sickness. High altitude porters were sent to rescue him, and help him down to camp 2. Unfortunately it was too late. He was unconscious when he passed away and didn’t suffer any pain, if that is of any consolation. Rustem was not only your beloved husband and a caring father of your children but also a highly respected mountaineer and my best climbing friend. Together will we all find a way to live with our sorrow and learn something about what death really is, which is where the pain stops and the good memories begin. Not the end of life but the end of pain. Rustem will be in our hearts forever.

Other teams reported good climbing conditions throughout this push, so the comments around poor weather are a bit confusing. 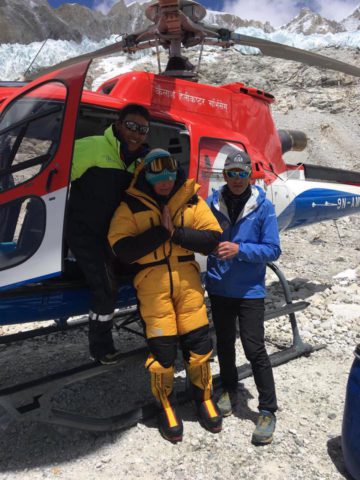 On 14 May, Swedish climber Carina Ahlqvist were on her Makalu summit push along with several other climbers and she but developed snow-blindness and was exhausted at Camp 3 on the descent. Helicopter rescue by Fishtail Air pilot Maurizio Folini was delayed by poor flying conditions but she eventually was rescued and is now in a hospital in Kathmandu. source

Teams reported excellent climbing weather all the way from Base Camp to the mid camps and for those on their summit push. Himex put two of their three members on the summit and are now back at C2:

Last night the climbing team left South Col camp at 20.30 in clear calm conditions. Unfortunately, Ross was not feeling good and so he and Son Dorgee returned to S Col and were back by midnight. Jacob, Dan, Nima Sona, and Nima Wongchu carried on and were on the Balcony at 03.16, still in clear calm conditions. They reached the South Summit at 06.35 and were on the main summit of Everest at 07.42 still with clear skies and no wind, so it looks like we chose a good day for summit push. They only spent 25 minutes on the summit and started their return down climb at 08.07, were at South Summit at 08.40, the Balcony at 09.46 and are now back at South Col at 11.24.

In the “so, you got to do everything?” category,  🙂 Italian Astronaut Maurizio Cheli, 59, become the second man in the world to both fly in space and summit Everest. He made the tippy top today with support from Seven Summits Treks Sherpas, Ramesh Gurung and Nima Rima Sherpa. Also Rupert Jones-Warner plans to summit both sides of Everest in a single season. He got the Nepal side Thursday.  Guy Cotter and Leow Kah Shin summited Lhotse a day after they got Everest. Kuntal Joisher summited Lhotse a couple of days ago and made this nice update on his Instagram account:

We had just come back after summiting Mt Lhotse. Possibly the toughest day of my life. I was following Mingma Tenzi Sherpa all the way to the top. Mingma, the insane rockstar he is, broke trail in knee deep snow, removed close to a km of buried fixed line, and then at the very top fixed about 150 meters of rope to open the route to the top. Anyway, both Mingma and me were sitting in camp 4 after the climb and out of the blue tears just started rolling and in no time I was crying profusely. Mingma asked – are you OK, what happened? And I told him that I’m super home sick. I’m remembering my mom, dad, and my wife.. And Mingma told me – control! He removed satellite phone from his pocket and said – give a call home man! I turned on the phone and right away it turned off. The battery had discharged! Aah the life in the mountains.

This is a disturbing video posted by Nepal guide outfit Mount Everest 8848M of people between Camp 1 and 2 on the Nepal side. Note some people having difficulty climbing, others rappelling/abseiling down in the middle of the ladders, a pack being pulled up because the climber couldn’t climb with it on, then there are multiple people on the loading the ropes. This is the kind of scene that suggests more experience and control on the world’s highest peak is desperately needed.

And again Transcend from India had another successful day with 7 members and 9 Sherpas. 7 Summits Club had 20 on the summit: 10 members with 10 Sherpas. You can see their names in the previous post.

Alpenglow Update – Going back up?

After declaring they had made a team decision to end all efforts on the north side this year, team member Neal Beidleman now says a few (or all??) of them are going to go back up: “No way we’re giving up here. We all decided that we all had it in us to give Everest a second shot. Our time frame is short but two days rest then back up for a two day summit attempt is the plan. Not going to be defeated by some regulator production issue.” After a dramatic evening on 16 May of oxygen tanks hissing life saving oxygen into the atmosphere at 28,000 feet (link), Alpenglow posted on Facebook that they were going to end to the season. I guess they changed their minds. Best of luck to them all.

Patrick McNight is on his push. You can follow him on his GPS tracker. There are a few climbers who are on tiny Sherpa supported teams including 28 year-old Illina Frankiv she was at C3 on the Tibet side on her summit push. You can follow her at her GPS. Also, young Australian Alyssa Azar who summited from the South in 2016 and now wants to get the North is doing well on a tiny non-commercial  team. She is at the North Col today and her home team posted this great picture: 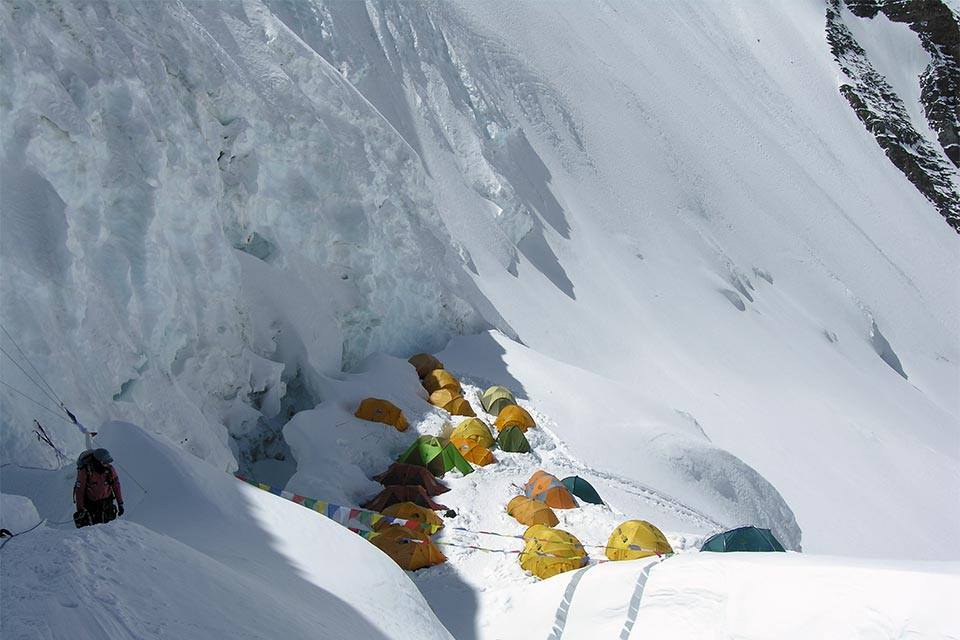 John Quillen climbing with Summit Climb on the Nepal side gave this update: “Today we double checked our oxygen system, repacked necessary climbing gear and solidified our plans. (We have no real leadership here, no one has heard from our expedition leader in weeks. He is apparently at camp 2, where we head directly from base camp tonight) .Fortunately, we are all self sufficient climbers with very competent Sherpa.”

Over on Dhaulagiri their summit push continues with Carlos Soria at Camp 3 but reporting very high winds that may stop this push, and the spring effort all together. Nick Rice and Ryan Kushner reported the same: “aborted climb to Camp 3 and returned to Camp 2 due to extremely high winds and snow. Will rest here and re-evaluate in the morning.” More summits on Cho Oyu by the German Summit Climb team.

My condolences to Rustem’s family and friends. Best wishes to all the climbers tonight in Nepal, Tibet and across the Himalayas.

One Response to “Everest 2018: Summit Wave 4 Recap – 70+ Summits and Russian Death on Nepal Side”