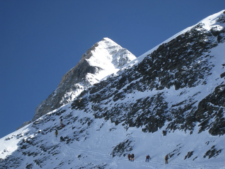 Three Indian climbers came home to celebrations and fanfare for summiting Mt. Everest last month but there was only one problem – they never got above Camp 3 at 23,000-feet, much less on the summit at 29,035 feet.

Vikas Rana, Shobha Banwala, and Ankush Kasana all from villages in Northern India, were climbing with the Nepali guide company, Prestige Adventures, along with six others members. They claimed to have summited on May 26 when there were no other climbers on the summit. When asked the names of their four sherpas, they could’t recall their names according to a report in The Himalayan Times.

According to my own records of the 2019 season, there were no summits on May 26 due to high winds.

Not the first time

In 2016 Makalu Adventures admitted they helped Indians Dinesh and Tarkeshwari Rathod alter their summit photos to show them on Everest’s summit when in fact they never summited.  They were banned from climbing in Nepal for 10 years.

The spring 2019 climbing season on Everest has seen a record 77 climbers from India, up from 58 in 2018. Many hired low-cost Nepal guides that didn’t provide the appropriate support for the limited experience level of their customers.

Of the 11 deaths on Everest this spring, four were from Indian and all with low-cost guides that charged half of the median price or around $30,000. Similarly four of the  additional 10 deaths on other 8000-meter peaks including Makalu, Lhotse, Cho Oyu and Kangchenjunga were also Indian citizens.

Indian citizen, Amit Chowdhury, a veteran of numerous Himalayan mountaineering expeditions and received the Tenzing Norgay National Adventure Award in 2014 for his lifetime contribution to Adventure Sports, was quoted on May 24, 2019 in The Times India that there are too many incentives that are encouraging Indians to attempt Everest without the proper experience. He went on that:

“It’s great to be garlanded in your local area by your local Member of Parliament, among a group of equally ignorant folks and show picture of you proudly standing on top of Everest and with the National Flag and perhaps land a Government job or get promoted from constable to a Sub-Inspector. If you are lucky and get some backing from a politician you could even land yourself an award or a plot of land. It’s not cool, however, if you say you climbed a previously unclimbed route on 6,485 metre high Brammah II.”

Oddly, the Nepal Ministry of Tourism said they had interviewed the three climbers and had accepted their summit claims and were preparing their summit certificates. The standard procedure is to produce a photograph of a climber standing on the summit with a clear view of their face. Apparently these three didn’t have any proof and the Ministry simply took their word.

The government appointed “liaison Officer” who is charged with monitoring a team for rules compliance and to validate their summit was only at base camp for two days and was not there on their alleged summit date, yet he had authorized that they had summited.

It seems that India has a problem with those hoping to climb Everest. Perhaps it lies with incentives and the myth that they will become rich and famous.

Indian climber Kuntal Joisher who has summited from both the Nepal and Tibet sides would disagree that an Everest summit is a path to fame and fortune and goes on suggest:

I get 100s (if not more) messages throughout the year from people aspiring to climb Everest – and my advice to all of them is 3 fold: