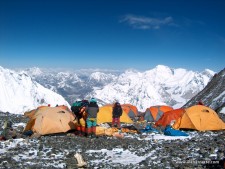 As most members are in Kathmandu or even home, the Sherpas continue to work hard on Everest. This end game on the expedition is called ‘cleaning the mountain’.

Simply put, cheap it means that everything they brought, they take back down. That goes for tents, oxygen bottles, some ropes and anchors, garbage, everything. Throughout the season even the human solid waste was collected and processed down valley at one of villages. It is not a prefect system as human solid waste is left above Base Camp. On the North side, there are few rules and waste is a big problem.

All the commercial expeditions are required to put down a USD$15,000 trash deposit as part of the permitting process on the South side. This helps to motivate the teams to leave no trace but sometimes smaller or one-time teams may not follow the rules.

Eric Simonson, IMG, does a nice job of characterizing the situation at Base Camp:

The Sherpas did the last carries this morning, and everyone is safe and sound off the mountain. Well done! We are pleased to have seen 46 summits from our 2013 IMG team (44 on Everest, 2 on Lhotse). Most of the climbers have now departed Base Camp. Some are hiking and some are catching a ride on a helicopter, so everyone should be back in Kathmandu in the next couple days.

Greg and Jangbu will be leaving in the morning, while sirdar Ang Passang will be staying a few more days, working with his crew to finish drying tents and getting everything packed up for the yaks and porters. Gear in good shape will go to our storerooms in Gorak Shep and Pangboche, and items requiring repair or dry-cleaning will go back to Kathmandu. Per the rules of our permit, all burnable garbage goes to the incinerator in Namche, all cans and bottles go to Kathmandu for recycle, all human waste goes to the designated burial site (in the soil) down towards Lobuche, and all empty O2 cylinders go back to Kathmandu for re-export. Only after we have fulfilled all these conditions will we get our $15,000 garbage deposit back.

A twist has occurred for 82 year-old Nepali Min Bahadur Sherchan, trying to regain the male age record. It has been reported on Japanese Yuichiro Miura’s Facebook page that a major collapse in the heart of the Icefall has effectively closed the route. They are now planning on using helicopters to return to Base Camp. This is the post:

Due to weather condition Helicopter was unable to fly into EBC & C2, today. They will try tomorrow morning. Today, there have been major collapse in the Icefall. Luckly no one was hurt but the part of Ice fall route have been destroyed and route has been closed. Few climbers and sherpas had to return back to C2.

I am waiting for official word the Icefall has been closed thus ending Nepali Min Bahadur Sherchan, effort to regain the age record. There is always a chance the Doctors will find a way around the collapse. It is not clear how many teams still had gear above the Icefall. Usually the route is open until everyone has cleaned their camps, normally until June 1st.

Tim Ripple, Peak Freaks, posted a couple of interesting items on his blog. The Nepal Ministry of Tourism now requires a photo of your face on the summit to give you summit credit. Tim also noted that the power will be shut off in Namche for 6 months as they replace a dam that provides hydro-electric power to the area.

A ninth death has just now been confirmed. A Japanese, still unidentified, died on the North side below the top of the exit cracks on May 20th. It is unclear if he had summited but eyewitness reports believe he was descending.