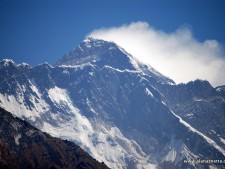 This past week was about as good as it gets on Everest. The winds were manageable, look the crowds tolerable and the summits plenty. There was little drama as the 2012 season neared the end.

Every day we saw multiple summits on both sides. However the North side took the full force of high winds, as usual. Sadly, there were also deaths this past week.

There were about 300 summits this week alone, well over 600 for the season. But they were orderly and the waits at the usual suspects were reported by climbers to be under half an hour. It appears the leaders learned from last years problems. But more than anything, having nine days of summits compared to only two made all the difference.

The Week in Review

The week started strong with over 75 climbers reaching the top on Monday. This included the Everest Trilogy by Kenton Cool and Dorje Gylgen who summited Nuptse, Everest and Lhotse – this had never been done in a single push from Base Camp. Dorje Gylgen did not summit Nuptse.

Also, on top was Brit Dan Hughes who made history and attracted unwanted attention from the Nepali authorities with his live BBC interview from the summit. Samina Baig, became the first Pakistani woman to summit. Samina’s brother, Mirza Ali did not summit – there was some confusion about this.

The teams on the North side pushed hard through harsh winds, some made it, some held tight, some reed. During the week, a Japanese climber died on the North side in the harsh environment. He is reported to still be attached to the fixed line near the exit cracks.

The action really picked up mid week as the winds finally abated.  Six Indian students, all age 16, from Sanawar India made the summit along with their guides, leaders and Sherpas. 80 year-old Japanese Miura Yiuchiro summited, setting an age record.

Dave Hahn got his 15th summit, a non-Sherpa record. Melissa Arnot set an American female record with her fifth summit. Lakpa Sherpa holds the female record with six summits. Phurba Tashi with Himex tied Apa Sherpa for the most Everest summits with 21.

There were multiple other firsts and history but I leave it to them to share their success with the world. A sincere congratulations to each climber for their effort regardless of the result.

Of note, Russell Brice, Himex,  had a very good year ending this week with 22 summits on Everest alone. He also put climbers on the summit of Nuptse and Lhotse. I’m sure he is proud of this year after a difficult 2012.

These are some of teams who enjoyed success:

As the week ended, the helicopters were busy. Many climbers choose to ride share back to Lukla or even to Kathmandu and not trek out through the Khumbu. On the North, some teams are still at Base Camp waiting for drivers from the CTMA to shuttle them back to Nepal.

Several teams still had Sherpas removing all the tents, oxygen bottles and gear from the mountain. Within a few days, Everest will be quiet once again.

This week there were four deaths. In addition to the one mentioned earlier on the North, Lee Hsiao-shih, 57 from Taiwan was reported to have died on Lhotse. Sung Ho-Seo, 34, of South Korea was attempting the climb on the South without supplementary oxygen and died on his way down the mountain. Mohammed Hossain, 35, from Bangladesh, died in his tent a few hours after successfully summiting from the South. There have been nine deaths for 2013, four were Sherpa. None were attributed crowds.

Determined to summit, 81 year-old Nepali, Min Bahadur Sherchan, is reported to have left Base Camp Sunday, May 26th with 5 Sherpa. He is attempting to regain the age record from Japanese Yuichiro Miura’s who summited this week at the age of 80. I have it confirmed he will go for the summit this week unless something major occurs preventing it. Mr Sherchan was born on 20 June 1931.

A collapse in the Icefall on Saturday was said to have closed the route and ending the season but there has been no official word the Icefall is closed and teams continue to report movement by their Sherpas from the high camps back to Base Camp.

The issues with climbing this late in the season include warmer temperatures and unstable weather. The monsoons have already started with reports from Kathmandu to Lukla of heavy rain. This will eventually reach Everest resulting in heavy snowfall. But of more immediate concern is the melt associated with warmed days.

In Camp 2 there is usually a river of water running into the Western Cwm. On the Lhotse Face, the anchors holding the fixed lines are melting out thus no longer holding the rope secure. And in the Icefall, the movement, combined with the warmer temperates increases the chances of falling seracs or avalanches. All of this conspires to have the Icefall Doctors stop maintaining the route at the end of each May.

I will continue to post updates as news warrants. Dave Hahn and Scott Woolums reported Saturday there are still climbing teams on the South side. Look for my final season recap this next week.

Thanks again for following this year, but more than anything else, thank you for your donations to an Alzheimer’s non-profit. I am not informed of the donations by name but only know that some of you have been very generous, and for that you have my gratitude, and that of over 50 million worldwide impacted by this disease.

Your donations to Alzheimer’s are why I cover Everest each year.