It’s clear that there is or has been COVID at Everest Base Camp. Well, at least it clear that people who had it there were taken to Kathmandu where they tested positive and are receiving treatment. It’s also clear that Nepal is seeing a huge spike in new cases and has gone under lockdown once again. Finally, it’s clear that India has become a super-spreader country and needs global help to respond.

Nepal tourism officials continue to deny there are any problems at base camp other than one person who had pneumonia. The guides, both foreign and domestic, are posting only climbing updates with no mention of the virus. This includes those who are well-known to have multiple cases within their teams and some who have been evacuated. I’m receiving confidential messages telling me of several, three or more at this point, teams who have evacuated members to Kathmandu telling everyone that they had the “flu.” Some have 4,5 or more cases and in some cases 50% of their team members. Also, word is that Sherpas are getting sick.

Now, on to climbing. Many, many teams are doing their rotations and report no issues. Of course, there are the usual problems with a few people having altitude issues or GI problems, but this is to be expected each year. The conditions are reported as good, albeit with the Lhotse Face being a bit harder than normal due to the lack of snow. Also, the Khumbu Icefall appears to be in good shape, however, the route is taking a bit longer than in previous years but not being a major obstacle. There are a few comments on lines at the few ladders due to the record number of climbers on the mountain in the spring of 2021.

At last count, Nepal has issued a record 408 Everest permits.

UPDATE: A small shift in the upper Icefall occurred on Sunday around noon. First reports said there were 4 injured but it was one member and one Sherpa. Witnesses said lots of heli activity. They suffered only bruises apparently. We’ll need to wait for the team to describe exactly what happened if they do.

Effective Sunday night, May 2, 2021: Nepal suspends all domestic and international flights until May 15 due to COVID spike plus, new visitors to Nepal must have a negative PCR test and quarantine for 10 days

Let me start by addressing a post I made on April 29 where I took a post from a Facebook friend and used it as an example of the different viewpoints on COVID at base camp. She became upset when she found out and saw several unpleasant comments in response to her’s. I apologize and certainly never intend to make anyone uncomfortable. I’m leaving the post up but removing any names. I usually only moderate comments if I think they cross a line of good taste, are mean or other parameters I’ve set for myself and my blog since 1999. I’ve had very few problems and thank my readers for that.

Teams got as high as “tagging” Camp 3 on the Lhotse Face but most were content to spend a few nights at C1, move to C2, and stay for several more nights. Most teams did the standard rotation of five days but a couple extended it as much as ten. One climber was long-lined from C2 showing altitude problems.

The weather continues to be amazingly good. I interviewed with meteorologist Chris Tomer last week and we discussed the jet stream’s current position – well north of Everest. Time will tell if it moves back on top of Everest but for now, this means low winds and manageable snowfall from EBC to the South Col. Temps at base camp are warming up as we leave a cold April. This weekend, the highs were around freezing, significantly higher than a week ago at 0F. 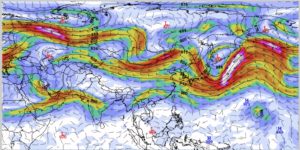 With this good weather, the Sherpa rope-fixing team got to the South Col, just about on schedule. Look for them to summit any day now thus opening the route from everyone else. You can see several teams now at Camp 1 on my team location table.

After a few rest days in EBC, the teams that went to C1 and a few who went to C2 but not C3 will return for another rotation to complete their acclimatization process. Several teams have declared their rotations completed and now are on weather watch looking for an appropriate summit window. Usually, this is four to six days of winds under 30 mph. It looks something like this:

Looking at a few computer-generated weather forecasts, the winds gust will be under 30 mph through at least Sunday, May 9. If this holds, look for member summits next week. Overall this is excellent news given the number of people on the Hill. This long window will allow them to spread out and minimize any crowding issues.

Some of the Annapurna summiters have moved to Dhaulagiri but heavy snow has stalled any significant progress. A few climbers have reached C2 but, again, the ropes are yet to be fixed very far up the Hill. Among the climbers at base camp include 82-year-old Carlos Soria on this 12th (yes twelfth) who is at Dhaulagiri Base Camp.

The Slovak-Romanian team lead by Peter Hamor with Marius Gane and Horia Colibășanu have established their C3 at 6,300-meter for their attempt the North-West ridge. Meanwhile, Carla Perez and Topo Mena remain on the standard route fighting deep snow. Heavy snowfall is predicted all this upcoming week, so we might not see any progress on any route.

The permits for Everest surpassed the previous record of 382 foreign permits set in 2019. The Nepal Ministry of Tourism posted these foreign permit tally as of April 30.