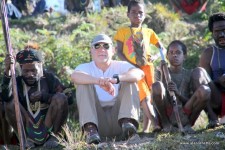 Carstensz Pyramid was without a doubt the most exotic, logistically complicated and, capsule from a pure climbing perspective, rewarding of all the 7 Summits. In my usual approach, I will post a full trip report, FAQ and photo/video gallery but for now, some highlights of our summit day.

As I previously posted, strikes at the huge local gold mine created massive uncertainty with our flights to Carstensz base camp (BC) resulting in having to charter several helicopter flights to avoid the 6 day trek across the Paupu jungles. But we were here to climb, not trek, so the entire team was satisfied to work thru the additional delays and costs; albeit still a surprise.

We arrived at BC on October 20th and took one acclimatization day. We left BC around 2:00 AM on the 22nd for the summit. The route follows a series of cracks and rock gullies from the BC at 14,065′ to the summit ridge around 16,000′. The stars were out and the temperatures in the mid 30’s. Very old and frayed ropes marked the route but we tried to avoid putting our full weight on them – at least on the up climb – so it was full-on hands and feet to the incredibly sharp limestone rock.

The climbing was fun, plain and simple. Our headlamps shown brightly a few feet in front and each step plus handhold was new as we made good progress towards the crux of the ascent, the Tyrollean Traverse around dawn. I had viewed several videos of the Tyrollean but was still not prepared for that final step where you committed your life to a steel cable, pulley, string of ropes and my waist harness. One by one we pulled ourselves across a 50′ gap above a 100′ drop to a ledge and then another 1500′ to the valley below. Amazingly fun! I will post my helmet cam video on the trip report.

Once across the traverse, we still had two more challenging gaps to overcome which involved some tricky down climbing and then a similar effort to regain the loss all towards the summit. After 4.5 hours we reached the final climb to the summit. The entire climb was a series of narrow rock ridges, exposed drop-offs and scree where we occasionally stepped on shallow snow patches, but it was mostly solid footing.

The summit was small, marked with a plaque that had washed out years ago but someone had left an ice axe with the Indonesian flag attached to it. We stayed for about 30 minutes enjoying the good views and mild weather.

The down climb was more physical in some ways than the ascent with multiple rappels required to cover the steep rock faces and gullies. Rarely did a rope length go more than 100 feet before a knot or an anchor required a full stop and re-rigging the rappel device. The anxiety level was a bit high as we depended on those aged ropes. We made the return climb in about the same time as the ascent.

So, Carstensz was quite the experience. It was filled with uncertainty the entire time and never felt organized – but that is par for the course climbing in this part of the world. The local culture was revealing, the climbing rewarding and the opportunity to send our message of hope, need and urgency for Alzheimer’s from the summit the purpose. This summit was dedicated to the Alzheimer’s dads out there.

There is a lot more to tell: an uprising of local porters and natives that almost stopped our flight, eight hours of rain a day, the isolated village with no roads in or out but uses motorcycles to get around, the war veteran with one leg and arm who trekked in for 9 days and much, much more. My mom would have loved to hear about these adventures …

OK, one more to go: Kosciusko in a few days! 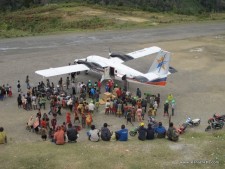 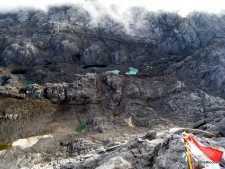 Lakes BC and Yellow Valley from Summit 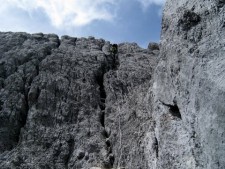 Last Chimney to the Summit Ridge 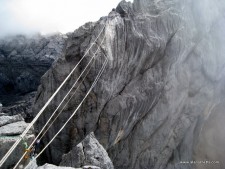 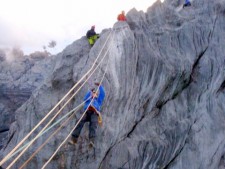 Alan on the Tyrollean Traverse 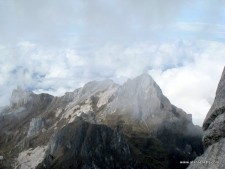 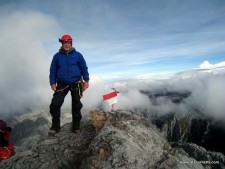 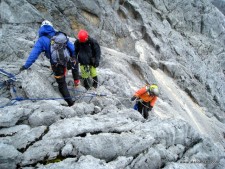 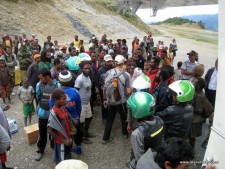 Scott Surrounded by the Locals at Bilogai 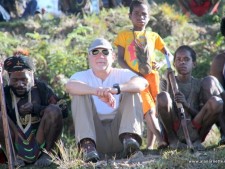 Alan Fitting In with the Locals