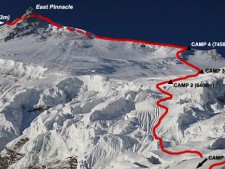 A threatening cyclone off the India’s coast created problems throughout the Himalayan peaks. Teams were forced to turn back, click other to stay at base camp. But the forecast suggested a short window over the weekend and September 26 is the key day.

Japanese Nobukazu Kuriki is targeting Saturday for his summit of Everest and several teams left Manaslu base camp only to find difficult conditions up high.

Manaslu missed the big weather event that shut down Everest and Makalu but teams are still uncertain about when to go to the summit. With 106 climbers on Manaslu, there is a lot of pressure to get up and down as quickly as possible before the next storm moves arrives. It looks like several teams left base camp eying the 26th but reports just in say they are returning to base camp based on unstable snow above Camp 3.

Phil Crampton, Altitude Junkies, summed it up this way on September 23rd:

The weather forecasts have been varied so we decided to take a gamble and hope that our forecasts are correct. The teams had planned to depart base camp at 3am this morning but a torrential downpour delayed our depature until 6am. The rain we received at base camp is depositing snow at camp one and below so we feel the route is safe after so many days consolidation and the continuing clear skies. We decided it was better to give the summit a shot in the next few days, rather than waiting for a perfect forecast that may never come.

Russell Brice commented that the weather is playing havoc with their schedules but have landed on a summit attempt on September 26:

It is always a difficult decision to decide when our team should try to reach the summit of any peak. Here at Manaslu where we sit in the cloud at Base Camp for so much of the time it is difficult to know exactly what the snow and wind conditions are like high on the mountain. So we rely heavily on our weather forecasting and try to combine this with our experience to make the correct calls.

This last week has been particularly difficult as we saw a cyclone approaching Nepal which had the potential to deposit a reasonable amount of snow in this area. In the past we have seen Cyclone Hudhud come to Nepal last year which deposited large amounts of snow in the Annapurna area with the loss of many lives, and in 2013 we saw Cyclone Phailin come to the Everest area just before we went to Ama Dablam, which also deposited over 1m of snow. So you can see why we are cautious here and do not want to be in the higher camps at this time.

But then I heard that the snow fell mainly in the Everest / Makalu area and we thought that this moist air stream had passed us by. This gave us some hope that we could get back on the mountain knowing that it was mainly clear above 6,000m, but then we had another problem lingering, it looks like the Jet Stream winds will move closer to Manaslu from 27 onwards. So we decided to make the 26th our summit day, but this meant climbing from BC to C2 in one day, a long and hot trip.

I was fortunate to get a couple short updates early this morning. The team made it to Camp 3 yesterday and is currently hunkered down for the night. Unfortunately – it appears there is heavy and potentially unstable snow above C3. They anticipate returning to Basecamp in the morning (tonight here is the US). Huge setback. The intention would be to wait for another summit weather window, provided they have enough gas left in the tank to make another go. The return to BC will require a lot of work – so please continue to keep her in your thoughts – just because they are heading downhill does not mean anything is certain. I’ll let you know as soon as they are in BC.

After getting dumped on with heavy snow that collapased their tents at base camp, the Alpenglow team on the world’s fifth highest peak (27,825’/7828m) is biding their time waiting for the snow to settle but may start their attempt at any moment

A small team lead by French Alpinist Yannick Graziani is at Dhaulagiri (26794’/8167m) base camp. They are also impacted by weather but today was better and hope to do a recon climb to 5200 meters.

Japanese Nobukazu Kuriki, is the only person on either side of Everest this autumn. China closed all climbing for 2015 after the April earthquakes.  Kuriki returned to base camp on September 22 after a thwarted attempt. He posted on his Facebook account:

I left the base camp on 16th morning and wanted to go up to camp 2 (6400m). But by the time I got to camp 1 (6000m), it was complete whiteout, and I received weather forecast that it was going to snow in the next day, so I decided to depot my stuff and to come down to the base camp for now. I’m going to wait for a next chance of good weather to climb again in a few days.

It appears he is now on his summit push. According to his blog he is at Camp 3 on the Lhotse Face and plans to summit on September 26. His SPOT tracker showed his last position at 6900 meters a bit short of the traditional Camp 3 location of 7100 meters. He is climbing alone above Camp 2 and not using supplemental oxygen.