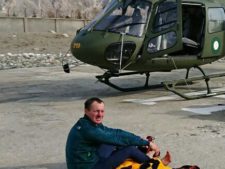 Climbers, feeling the pressure of deadlines, records and life, stopped their Everest attempt and set out solo on K2. See the Update below.

See this post for full background on the K2 and Everest expeditions and the history of winter attempts on the highest two mountains on Earth. Both expeditions need to summit no later than the spring equinox on March 20, 2018, at 0:15 PKT for K2 and 18:00 NPT for Everest to meet a winter summit definition, but even that is debatable.

Big Picture – The Rational and Irrational Pursuit of Records

We are witnessing the best and worse of the human condition – attempting to doing something no-one else has ever done. We see this often with solo ocean crossings, the Antarctic, ice shelves in Greenland and of course, on mountains. On K2 and Everest, today saw climbers set off alone, leaving the rest of the team behind trying to set winter summit records and thus putting their names in the headlines and the record books. One turned back, the other …. well, we don’t know how it will turn out.

Alex Txikon on Everest has presented a public profile of a team player. He posted pictures and videos of hugs and dancing at base camp, spoke fondly of his teammates and their unified contributions. However, it was Alex and Alex alone last winter who set out from Camp 3 for the summit only to be turned back by deadly winds. 2017/18 was a redux of that experience. Cleary he does not have a death wish. He returned to base camp with his teammates by his side.

Denis Urubko on K2 also set out alone, but as a rogue climber. He snuck away without telling his leader or teammates. In his pursuit, Denis is demonstrating why he is a world-class alpinist, but also a dangerous teammate. And therein lies the contradiction. Denis was willing to give up his K2 summit to help rescue Revol and Mackiewicz demonstrating amazing climbing skills and an unselfish attitude yet, knowing he was perhaps the strongest member of the Polish team and key to having a “team” summit, he set out to grab the summit for himself believing the end of winter was on 28 February. The reaction from his teammates was one of mixed support.

When winter ends is more complicated, and arbitrary, than thought. In Nepal and Pakistan, the mountaineering organizations define winter as the beginning of December to the end of February while the astronomical calendar says winter 2017/18 this began with the winter solstice on December 21, 2017 at 11:28 am EST and ends with the spring equinox on March 20, 2018 at 12:15 pm EDT.

Winter K2 – Fracture of the Team

In a startling announcement, Krzysztof Wielicki the Polish team‘s expedition leader, posted on their site that Denis Urubko quietly left base camp for a solo attempt of K2. He did not inform anyone, ask permission or seek support. Apparently he believes that winter ends at the end of February so he had no choice but to make his attempt now. The weather forecast called for high winds – near 100mph/160kph over 8,000-meters. Wielicki said he would send the Pakistani High Altitude Porters to C2 with emergency oxygen and others on the team would go to C2 and C3 for acclimatization and to “secure” Urubko. Wielicki went on to stay the rest of the team would proceed with their agreed upon schedule targeting a summit in early March.

Denis along with Adam Bielecki have proven to be the strongest climbers. Denis had set most of the fixed lines himself and several times had gone up the route alone, with the support of the team. For him to make this solo summit attempt should not surprise anyone as on his blog he criticized Wielicki’s decisions and his teammates for their habits and refusing to speak Russian to him.

In a November 2017 interview with Alpinsmonline Magazine, Denis’ comment now appear to be prescience but also he suggested he would be a loyal member of the team.

Q: And specifically for this K2, do you have already designed or developed the strategy?

DU: This question would be better for the leader of our expedition. I need to be prepared as much as possible, to be ready for the summit push, as a member.

Q: You said that the winter season should be considered according to the “climatic factors” and not the “astronomical calendar. Therefore, taking into account issues” winter “Himalayan and Karakoram, the winter season runs from 21 December and sets the maximum to 28 February. Still keeping that thought would the February 28 deadline to reach the “Winter K2”?

DU: I guess period 01 (zero one) December – 28 (29) February as a true winter. About our project to K2, my opinion does not make sense now, because I’m only fulfilling the duty, I would get to the top. Later or sooner, no matter. The only success is important. After the expedition will see doubt, meanings, options, with Krzysztof Wielicki.

You can read more about Denis’s thoughts on winter at this link. The media outlet Wspinanie.pl reports that Denis met up with Maciej Bedrejczuk and Marcin Kaczkan at C1 but reused to speak with expedition leader Wielicki and further will not take a radio with him as he climbs higher.

Rafal Fronia, one of the participants in the National Winter Expedition to K2 is quoted on sport.pl:

“In my Himalayan life I have not met such a fast, determined, focused on purpose and at the same time competent in what he does, like Denis Urubko. If he made such a decision, it means that there is a good chance that this action will be a success … there is a lot going on very fast. I would refrain from unequivocally assessing Denis’s actions, because in a day or two it may turn out that we will withdraw what we have said. Perhaps this decision was dictated by the incapacity of one of his colleagues, with whom Denis wanted to go up. We do not know the end completely, we only get incomplete messages.”

Remember that for many who watch and participate in expeditions like this if one person summits, the entire effort is considered a success. What makes this unique is Denis’ attitude and not telling anyone. If a teammates gets in trouble trying to help him, that would be a tragedy, similar to if Denis does not come back.

Denis probably goes today to C3. I’m worried about it very much. He proposed a common exit but I suggested to better rest and wait for reasonable weather. He went alone. Meanwhile, we do our own. Bedro and Ducks assume C2 and Arthur and hops came just to C1.

– It seemed that everything was OK. Denis came for breakfast in the morning (on Saturday – ed.), They sat until late, then left the base without telling anyone and went alone up. In the first camp he met with Marcin Kaczkan. Marcin asked him to talk to Krzysztof Wielicki on the radiotelephone but he did not want to carry out this conversation and went further up. He slept in the second camp tonight. Probably because there is no communication with him. Today should come to this tent, in which he and Adam spent two nights at 7200 m above sea level – he reported. 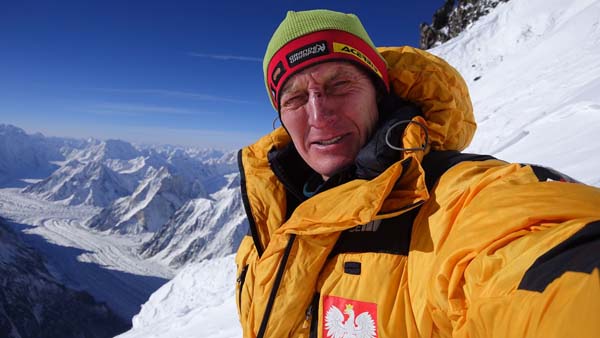 Michał Pyka ( michalpyka.blogspot.com ) has been providing custom weather forecasts for the K2 team notes the weather will be poor through the end of February, thus Denis’s effort may be in vain, or worse.

Alex Txikon and team made it to Camp 3 on the Lhotse Face when high winds hit them. While it was expected for late Saturday into early Sunday morning, the anticipated window never developed. Txikon set out anyway for Camp 4 but turned around and returned to Base Camp along with the five Sherpas and Muhammad Ali Sadpara who said “We are back at base camp from C4. Very strong winds and lethal weather made it almost impossible to go for the summit.”

Their permit is supposed to expire at the end of February but it most likely could be extended. The real question is the weather and as he saw this weekend it is less predictable than permits.