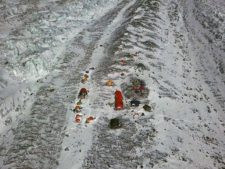 One of the K2 teams arrived at base camp but poor weather is already hindering progress. Climbing is going well on Nanga Parbat, but also some weather concerns.

K2: Kazakhstan, Russia and Kyrgyzstan Team – at BC

The seven member team from Kazakhstan, Russia and Kyrgyzstan arrived at K2 Base Camp in good condition. They tried to do a recon to Advanced Base Camp, a short walk from BC, but turned back when they hit poor weather.

The other K2 team, lead by Alex Txikon, are at Concordia enjoying great views of K2. They should arrive tomorrow, January 16. A third Polish climber,  Waldemar Kowalewski, is joining their team and is on the trek in.

This team of Daniele Nardi, British Thomas Ballard and two Pakistani teammates Rehmatullah Baig and Karim are back at Camp 3 at 5,714m with a cache of gear. They found their tents buried in deep snow and had to dig them out – hard work at that altitude. They are attempting the Mummery’s Spur.

Winter Manaslu – At Manaslu BC

Simone Moro and Pemba Gyalje Sherpa are now at Manaslu base camp after summiting Mera Peak for acclimatization.

American climber Lonnie Dupre is back in Talkeetna, Alaska after giving up on his MT. Hunter attempt:

With the ice fall leading to the Ramen route on Mount Hunter completely impassable this year, I explored an alternate route which proved to have a high risk of serac falls and avalanches. I called for a pickup at basecamp and am now in Talkeetna. More to follow…pictures, video, and future ice climbing.