Home » Shishapangma 2007 » A Big Thank You and Choices

It is very difficult to express what I felt when I saw the email from Katie at the Cure Alzheimer’s Fund. She told me that we had a record number of donations this week. I read the words and the names of some the donors: Paula, Troy, Nicki, Paul, Renee. I put the PDA down and sat crossed leg in my tent. I re-read the message. My eyes took on the thousand yard stare towards the snow covered hillsides. What is the emotion beyond appreciation? What is the feeling beyond satisfaction? How do you describe motivation and encouragement? How can two words be so insufficient? Thank You.

The snow continued to fall during the night. I woke around midnight to high winds and flapping tent flaps. Having no other real choice, I slipped deeper into my sleeping bag and resolved to address the schedule in the light of the morning.
As expected the heavy snow during the night was not only at our ABC but also higher up on the Hill. Our previous plan has been scrapped. Reports came in the British Army, after eight weeks at ABC and on the Hill, were calling it quits. The found their tents destroyed at Camp 1 and the route to Camp 2 dangerous with deep snow. They had oxygen and gear cached below Camp 3 so I assume it will stay there until next season. Another very experienced team, the Spanish – several with multiple 8000m summits – returned to ABC after encountering deep snow also above camp 1. They will try again. One of our own members, Mark, spent two nights at camp 1 and reported high winds and deep snows. So, conditions are without doubt – poor.
Our team is growing anxious. We have now been down from Camp 2 for a week. The weather each day is different but has the common themes of snow, wind, cold, cloud and sometimes bright sun. You can see it each person’s eyes that they need or want something more concrete than an abstract arm waving of future weather. But that is as good as it gets. According to our US based weather forecast, the multiple models rarely agree thus not allowing for something more firm. But the forecast is not encouraging for the time period we have left.
So we wait and stare towards Shisha Pangma.
This is what we know. There is deep snow from Camp 1 higher. Perhaps two to six feet of new powder in some areas. The winds have not been consistent or strong enough to clear the areas where we need to climb. The sun has not be out consistently to cause consolidation. The slopes we climb to C1 are perfect for avalanches – 25 to 30 degrees. The deep crevasses that were previously visible are probably covered at this point thus hiding yet another danger. On clear days, plumes are visible from the summit.
We have three basic choices: stay focused on Shisha, attempt some lesser 7000m peaks or go home.
Advanced Base Camp has become as comfortable a home as we can make it. We have a main street and a couple of sides. The town center is where the dining and kitchen tents reside. The Sherpas have their tents however they usually jam into one tent for their afternoon gambling. When there is snow on the ground our streets are safe albeit slippery but when the sun comes out it is muddy and rocky. And we are living at 18,500 feet! 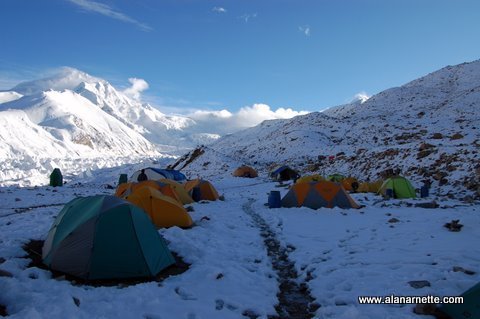 Our technology lives and dies by the rays of the sun. Our two large solar panels are constantly moved to give direct access to the sun but is a futile effort on snowy days. They charge two deep cell car batteries but with all the iPods, computers, satellite gear and rechargeable batteries it is a full time job to stay ahead.
But life is comfortable and choices need to be made.
Today, Sunday, the majority of the team left for a night at Depot Camp and then Camp 1. The objective is to stay active. They intend on returning to ABC on Tuesday. If a summit window appears they will return to C1 within days. Two members, James and Paul left for home. They are fine, other factors came into their decisions. A few other members will leave directly for Camp 1 tomorrow. I have given my plan a lot of thought and here is the latest.
I am staying in ABC for a few more days. I don’t like the danger on the mountain. The snow has not avalanched and I don’t like snow covered crevasses. I know my body well and as great as I feel, I don’t want to spend precious energy going all the way to C1 only to have to return and perhaps make a quick climb back. I am staying active by climbing to just under 20,000′ on nearby hills each afternoon. It is enough to get my heart going and lungs gasping so I feel i will be ready when I need to be.
So just as before, I plan to climb to Camp 1 and wait. If a window appears, I will be ready. If it does not, I will return to ABC and prepare to come home. Basically we have about a week for a good window to develop. But honestly, there is not a lot of optimism at this point. Each day we move closer to winter. The days are shorter and the sun is less intense. It is colder by the hour. However, weather is funny in that it often stops the normal parade and allows a side show to develop. Our hope is that our show will be five days of sun and calm winds. Will it happen?
So I am now a little out of step with the others. That is OK. Again, I like my plan for me. If I need to adjust, I can. But it feels safe, conservative and gives me the highest possibility of success. The rest of the team is doing well. My sincere hope is that we can all summit safely together. 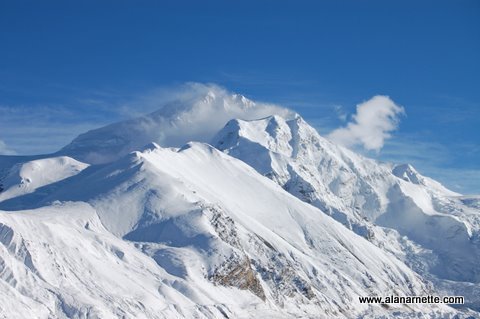 Remember: Memories are Everything
Climb On!
Alan