The sun was so bright in my tent that I put my sunglasses on before getting out of my sleeping bag. The rumors of a foot of snow proved false this morning. I awoke to the sound of Lama Thame Sherpa chanting his morning prayers. I was back in base camp.
We completed a major milestone in climbing Everest – spending a night at camp 3 on the Lhotse Face. It was everything I remembered and more.

As I previously posted, look the climb to C3 was slow and purposeful. I arrived feeling better than my four prior climbs in 2002 and 2003. It was very encouraging. Looking back I know realized that the pace then was too fast for me and I pushed too hard. This year’s entire expedition philosophy suits me much better.
The crowds were part of the reason for the slow pace. With schedules compressed many teams are rushing to get their night at 23, 500’ in order to push their bodies to be ready for the summit night. Also the face was full of Sherpas making their way to the South Col ferrying food, fuel, stoves, tents and oxygen for our collective summit push.
It was like long line of tiny ants moving slowly up the face the 4th highest mountain on earth. The pace was almost like a summit push. Step, one thousand one, one thousand two, step. But everyone made progress. Occasionally a climber or two would step aside and let faster climbers go by. Everyone was friendly and I felt a sense of a collective objective in the crowd. 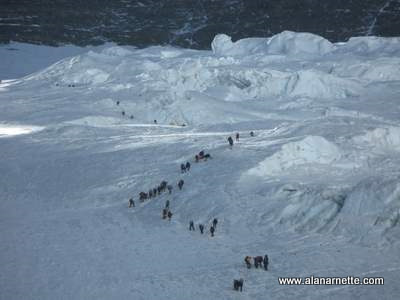 As usual our team arrived in the same order: Ryan, Al, Angus, Scott and I. Ryan always set the pace with Al close behind. At 59, he is rock solid. His limited experience has Ryan keeping him close but this is no commentary on his strength and heart. Angus is also a model of strength. From Canada, like Scott, he is an experience mountaineer. He is showing his skills for his first time on Everest.
Scott continues to suffer from a sinus drip that causes a troublesome cough. Nothing too serious but he paces himself to avoid complicating the problem. I like Scott’s pace since I am not in competition with anyone and I find the pace suits me. I guess one the lessons I have learned on all my expeditions is one of control and expectations. My mantra is one step at a time.

The night at C3 was as expected: cold, windy and not a lot of sleep. Ryan and I shared a tent with the Al, Angus and Scott in another. Melting snow for water and rehydration was the first order of business. The snow started to fall in earnest around sunset and the temperatures dropped accordingly. But the views were astounding. It is moments like this that I remembered the most from my climbs. 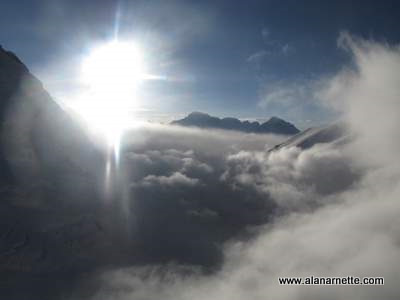 As a commentary on the crowds, there are actually three Camp 3s this year. Separated by a hundred vertical feet or so, there was not enough space to carve out tent platforms for all the teams at the traditional spot. But this was not a big problem. We were in the middle level at 23,350’ only 150 feet shy of the highest camp.
The tent was pitched on uneven solid hard ice with some sharp edges. So sleeping bag placement was crucial for a decent night’s rest. Once the sun set behind Pumori around 6:00PM we settled into our bags, iPods in hand. Ryan said I had some episodes of periodic breathing which is my body is trying adjust the PH in my blood by expelling more CO2. The subconscious mechanism is to stop breathing and then to gasp for air! What a system!! The end result is that I was waking up every few minutes gasping for air. Not a good start to the night. But I got about seven hours of sleep before waking at 3:00 AM staring at the tent wall or ceiling. Not bad really.
The sun rises around 4:30 AM but did not hit our tent until 8:00ish. This made for a long cold dawn. The snow had fallen steadily throughout the night including into our tent via the vents. A light layer of frost and snow covered everything. Ryan started the stoves for the morning melt as everyone began to get dressed. The wind was blowing steadily. Not a gale but hard enough that we knew the down climb would be interesting.
Two ropes were fixed for climbing the Face, one for going up and one for going down. But the reality was that few climbers were coming with the winds so strong so it was a free for all with climbers all over the Face and all over the ropes.
As I down climbed the first pitch I had an equipment malfunction. Just as I reached the anchor, my left crampon came off my boot. The clip that adjusts to the length of your boot had come loose and my crampon was dangling by the strap on my boot. Normally this was a not a big deal but I was on a 60 degree rock hard ice slope. I made sure I was securely fixed to the line with both a carabineer and my ascender and began the task reattaching the crampon. Just about that time, my old Sherpa friend, Ang Dorge came by and gave me a hand. I found it amazing that he happened by at that time.
Our team made swift time down the face fighting both the icy slope and the sharp winds. Most of us rappelled down half the face to save time. I met many climbers back at C2 that had started up the Face but gave up in the harsh conditions. 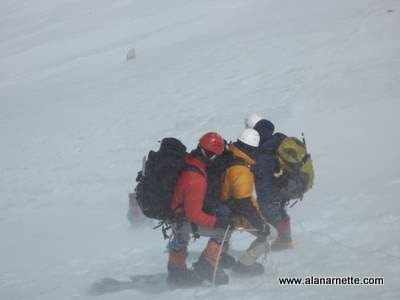 Once at C2 we were met with strong comments of bad weather moving in. A foot of snow every day for the next four days was the rumor. And that all the Sherpas had already returned to Base Camp. We all were feeling good and decided to go back down instead of spending another night at Camp 2. So after lunch we returned to the Western Cwm.
The clouds had moved in now and visibility was less than 20 feet. Soon there was a line of 20 climbers snaking our way though normally hot Cwm. In a moment of almost déjà Vu I stepped across a small crevasse and my foot went into the dark area below the white snowy surface. Scott who was behind me noticed my invisible footprint and stepped around the crack but told me later he saw my foot print just disappear.
It was a long trip down the Icefall and I was thoroughly spent when we arrived at Base camp. It was a long day of over seven hours of climbing and almost 6,000 feet of elevation drop. However the thick air of Base Camp was welcome as were the comforts of chairs, thick sleeping mats and good food.
Now the waiting begins. Our bodies are as ready as they will be for the summit push so we are waiting for the weather to provide us 4 or 5 days of good weather to reach Camp 4 and one day of low summit winds. The traditional summit day is around May 21 so we are in perfect position. We can be ready to go up in as little as 4 days or wait longer if necessary.
I will post more of our summit bid preparations during this down time.
You know, Everest 2008 has the potential of being remembered for all the controversy. Commercial websites, climbing magazines, the general press and party conversation will take delight in discussing the villains. But for most of the climbers here it is all about the climb.
Yes April was difficult and some of the experiences would have been difficult in the of times. There were more rumors up here than on a year of The View. However there are hundreds of climbers from around the world here for many reasons but the common bond is to try to climb the highest mountain in the world.
This focus is not an abdication of philosophies or beliefs. It is the agenda of the moment. We are here to climb. We are the athletes of Everest for 2008. We are trying to be safe and to return home to our friends and families with endless stories and memories.
Today the rumors consist of weather windows and snow conditions. Who will be the first to summit? What team will fix the summit ropes? Will the crowds be a problem above the South Col? These are the questions on our minds.
There is a time and place to discuss the other events of Everest 2008 but for now thousands of friends and families care only about the safe return of their climber. For their stories of sleepless nights, icy slopes and summit views. These are stories of individuals. These are real people turning their dreams into memories.
Let the climbing take the center stage. Send your climber your thoughts. Put aside all the rest. It is time to climb.
Remember, Memories are Everything.
Climb On!
Alan