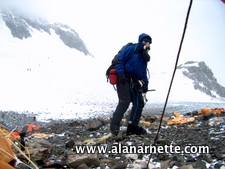 Starting with the north today. Teams are now occupying Advanced Base Camp. They will use this as their launching point for acclimatization rotations to the North Col and most will eventually climb to camp 1 on the Northeast Ridge. As we know, the north can be much colder and windier than on the south. Multiple reports are coming in that Everest is quite dry this year. This can increase the difficulty for some people not used to climbing on rock with crampons.


Bill Burke posted a audio dispatch from ABC commenting on the huge winds off the summit creating a large plume – not unusual this time of year. Once the monsoons off India start, the jetstream will move off Everest thus creating the summit window usually in mid May.


Adventure Dynamics has a nice posting today describing their ABC:

We have completed the 22km walk via Interim Camp and we are here at ABC. At 6500 meters, we each have a tent and are able to charge our Kindles, ipods, radios, sat phones etc. It is very cold here and windy. Some of the guys are feeling the altitude again more than others, but nothing serious. Water bottles and liquids are freezing in our tents at night, last night was our first night here and breakfast was omlette, toast and sausage, prepared by Asman, the cook who travels with us. We are able to watch movies on ipods, read books and generally will be resting up for the next 5 days and getting used to the thin air.

This is one of the gelled teams i have been with on Everest, the guys are all looking after each other. Our sherpas and head sirdar (Sonam) have started to establish 7700 meter camp but we have high winds at the moment. The wind is predicted to drop on 26th April when we will climb high and touch the North Col and break 7000 meters! Our next dispatch will be Mon/Tues next week when we have something to report, for now we are hanging at ABC.

Julio Bird has posted his gps coordinates from the north side. A look via Google Maps is interesting.

Leif Whittaker has another interesting dispatch this time with an exceptional video of his first climb through the Icefall. They made it in 3.5 hours which is a third of some other expeditions earlier this week. Leif credits Dave Hahn with pushing him hard to prepare for tougher days ahead. The writing is excellent but the video is a must see. Leif comments:

The variable terrain does not lend itself to an easy rhythm and I’m breathing hard as I try to match Dave’s dissonant pace. I realize that this will be a day full of hard work, of suffering, of potential danger. That realization, strangely, vaults me into a state of complete acceptance and awareness. Don’t ask me why, but I actually begin to enjoy crossing the airy ladders. The icefall is fun for a moment and extremely taxing at the same time.

There is a critical point to be made, however a bit early. Climbers may feel the climb through the Icefall and to camp 2 is difficult but it will seem quite easy once they leave camp 3 for the summit. So now is the time for them to push their bodies as hard as possible to build red cells, become accustomed to the altitude and conditions and most importantly to prepare themselves mentally for summit night when mental toughness will most likely determine their summit.

To illustrate the difficulty of climbing Everest, Patrick Hollingworth who is basically a team of one plus his Sherpas, writes of the early mental challenges. It is the Blog of the Day:

Yesterday I had a pretty average day, partly because I was missing people at home and partly because I was still feeling tired and flat, and the walk back along the glacial moraine from Gorak Shep was cold and windy and snowy. On days like these in the mountains (and they do occur relatively regularly for me on these long expeditions) I often bury myself in my music or books and exist in a state of semi-denial i.e. ‘no I don’t actually have to go back onto that large mountain that is towering above BC for another acclimatisation trip where it will be really cold and a lot of hard work’ etc. However thinking like that just makes it worse, and so I reminded myself that I am privileged to be here, and that this is what I have wanted to be doing for a long time, and that these opportunities do not present themselves very often. I then spent a few hours trading climbing stories with Sumit, and had an enjoyable dinner with all of the guys, and despite understanding only about 5% of the conversation I was feeling much better.

Another post I like today was from John Furneaux of Canada West Mountain School talking about his Sherpa team. As we know, the vast majority of the climbers would not attempt Everest without these unsung heroes. John comments:

All of our climbing Sherpas are veterans of multiple Himalayan, and Everest, expeditions. All three men have been employed by our guide, John Furneaux, and the Canada West Mountain School in 2008. Teng Dorje is well known throughout the climbing community as an excellent high-altitude Sherpa who’s load carrying abilities are incredible. Teng Dorje has reached the summit of Everest on five previous expeditions, most recently in 2008 with the Canada West Mountain School expedition. Mingma Sherpa has three Everest summits on his resume and Dawa, two. While Teng Dorje’s experience makes him the default lead Sherpa, Dawa speaks the English and acts as interpreter.

Following up from yesterday’s story about removing bodies from Everest, the family of Rob Hall would prefer to leave him on Everest according to Guy Cotter who now runs Adventure Consultants:

Dr Arnold has yet to hear from the organisers, according to Guy Cotter of Adventure Consultants, a close friend of her family. “The family perceives that the position he is on the mountain is where he’d like to have stayed. It seems appropriate,” Mr Cotter told The Times from Christchurch in New Zealand, where Dr Arnold lives.

“I don’t think the family would want to go against the wishes of the people of Nepal but it would be their preference that Rob be undisturbed.”

Alzheimer’s Update
It can strike people in their 40’s and has no cure. The current drugs only symptoms. It can costs over $5000 a month to care for an Alzheimer’s devastating family finances.

One Response to “Mental Toughness on Everest”