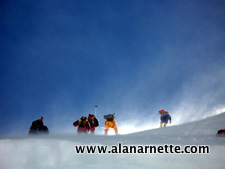 Even though the season is over and climbers are back home, click the ramifications from 2010 still echos throughout the climbing world.

There are two developments – youngest records and the search for proof that Mallory and Irvine summited in 1924. First, the records race.

This is precisely what people feared from the 13 year-old Jordan Romero’s summit. According to this article, Sherpa Pemba Dorje wants to find a younger climber to summit in 2011 saying that all Everest records should belong to Nepalese.

“Nepal is a small country and we do not get much good publicity. I want to take an 11- or 12-year-old to the summit because I think all the Everest records should be held by Nepalese people.”

Dorje knows records. He holds the speed record for climbing Everest in eight hours and 10 minutes in 2004. Beyond belief he said he is even considering taking his nine-year-old son, Tseten Sherpa, who turns 10 later this year. He said they would climb from Nepal and the tourism ministry had agreed to make an exception to their 16 year-old minimum age for a Nepalese child ing to break the American’s record.

On the history front, it seems that Jochen Hemmleb’s team recovered Howard Sommervell’s ice ax of the 1924 expedition. It had been lost on the North Face and must have been found there by a Chinese climber (in 1960 or 1975) and brought down to ABC, where it was abandoned as broken and of no use, according to Everest historian Tom Holzen. I tried to contact Hemmleb for a comment on his search but was unsuccessful.

Tom also noted that June 8th 1924, is the anniversary of the last sighting of Mallory and Irvine high on the north slopes of Everest. He suggest we celebrate the day as follows:

To celebrate Great Daring on Slender Resources, mix-up a batch of Maibowel “May Punch”:  Soak a pint of cut-up strawberries in a quart of brandy for 4+ hours, adding a spring of sweet woodruf (Waldmeister). At the appropriate moment, add four bottles of champagne (or Prosecco) and drink reverently.

While we still do not know for sure, it appears the camera or Irvine’s body was not found. But the search teams are very quiet with the loud exception of Duncan Chessell who told the Australian press that he intends to return in 21011 with a more formal search.

So when the adventurer returns to Adelaide on Saturday he will launch a dedicated Australian expedition, planned for 2011, to search for Irvine’s remains, hopefully with more success.

“I know it sounds strange, but at the time I couldn’t help thinking that the mountain was acting to keep its mystery to itself,” he said of his first attempt.

For climbing fans, the action has now moved to the Karakorum in Northern Pakistan. With the issues in that part of the world, there are an abnormally low number of permits issued, only 25 this season. But teams are on the Gasherbrums, Broad Peak and of course, K2.