If you have ever climbed in the Himalaya, ambulance you probably are as shocked by this headline as I was to receive the news. Lama Geshe suffered a stroke around September 20, 2010. He was flown to Kathmandu, paralyzed and in poor condition.  He has since undergone an initial surgery and seems to have improved some. He is now responsive and resting. 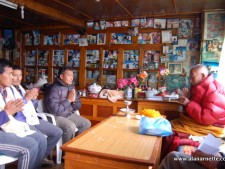 Lama Geshe, 79,  lives in the Nepalese village of Pangboche with his wife and family. He is the highest ranking Buddhist Lama in the area. Almost every climber to the Everest region visits him to receive a blessing before their climb. For many climbers and trekkers, this is one of the highlights and life long memory of their visit to Nepal.

If you do not know Lama Geshe then this is what makes him so special – his smile, his gentle touch, his soft laugh, his aura that made you feel as if the world was in good hands. You simply feel better no matter your woes by just being near him.

He conducts pujas where climbers receive his blessing for a safe climb. Many Sherpa will not touch a mountain without his blessing. This is how I reported one of my visits:

The ceremony is very detailed. First he takes a thin yellow or red string (a sungdi) and places it around our neck. Then we give the silk scarf (a kata) to his daughter with an offering in it. He says a brief prayer and the scarf is placed back around our neck. For many, he offers a gentle head bump to “seal the deal”. We move to the bench and sit quietly while he does the same ceremony with all the other climbers and Sherpa.

The Lama then begins to chant prayers for our safety and permission to climb the mountain while tossing rice into the air and occasionally ringing a small bell. The entire ceremony last about 20 minutes. Today he must have blessed over 100 climbers and Sherpa.

I am always touched by this ceremony. In the quiet moments, I reflect on why I am here and what this means to me.

The family has established a fund to help Lama Geshe.  Please use the secure “Donate” button below to make a one time donation that is fast and secure. This will take you to PayPal’s safe and secure web site to enter your personal information.

Your donation will be sent directly to Lama Geshe’s son Jigme Sherpa who will serve as Director of the fund. 100% of donations will be utilized to benefit Lama Geshe and his family. Jigme is currently a Junior at Nazareth College. He has taken an emergency leave this semester and is en-route to Kathmandu to care for his Father.

My father is doing pretty well. I met the doctors yesterday and they told me that he had suffered Chronic Subdural Haematoma. Before admitting to the hospital he was motionless and could not talk.The doctors said that it was due to excessive amount of blood in the brain which pushed and squished the right side of the brain. My entire family believed he would not survive but now things are in control.

The doctors operated on him to take out the blood and clean the brain. After the operation, he was in ICU for 4 days. During the four days in ICU, rash developed on this bottom which was pretty bad but is getting better day by day. After the surgery, my sister said he could not even recognize her but now he can recognize most of the people who come to see him. He has been eating well. He can move his left side of the body well. His right side of the body at the moment is functionless but the doctors said that he will recover from that as well.

The  doctors still believe that there is blood in his brain and mentioned that they would take those blood out in small amount in multiple periods because they fear that taking out blood at once could damage his brain and also might cause death because of his age.

Lama Geshe has been discharged from the hospital and is living in a rented apartment in Bouddha. He will most likely be in KTM for couple of months. The stitch on his head is taken out and he has started doing physical therapy.

9 Responses to “Update 2: Lama Geshe Suffers a Stroke: A Call to Climbers for Help”