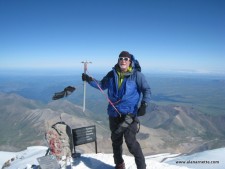 Alan on the summit of Elbrus

Well, prescription I am back in Southern Russia at my hotel after a very fast and successful summit of Mt. Elbrus at 18,583 feet. As usual I will do a complete trip report but here are the highlights.

We arrived at the Elbrus Base Camp on Sunday, August 7 and took another few days to reach the High Camp at 12,000′. The weather was good throughout the week so I was a bit worried when we took a rest day after an acclimatization climb to 14,500′. After eight days at 17,200′ on Denali only a couple of weeks ago, I was ready to go for the top of Europe.

Then on Thursday around midnight, we awoke, ate a basic breakfast and headed up. We had two teams, one of 5 of the 7 Russians on our climb and then myself and the other American, James, along with the lead guide Daniel from AlpsIndustria. The Russian team was headed for the east peak while we went for the higher, west summit.

We took a direct line towards Lenz’s rocks, a collection of boulders jutting out of the glaciers and then veered towards the west summit, the higher of the two peaks making up Elbrus’ summits. Remember, I was climbing from the north and thus there were no ski lifts or snow cats like on the south side. The crevasses were in full bloom and the winds were quite strong throughout the night. But thankfully the temps were only in the mid teens making the wind chill around 0f so not too bad considering.

We traveled roped up for about half the way and then unclipped for the final climb of a steep snow slope of about 1,000′. It was sobering moment when Daniel pointed out to me the remains of a few yellow tents where nine climbers had died during a fierce storm. This was no easy walk-up as sometimes advertised.

Once on top of a huge flat plateau, it took another 15 minutes to reach the true summit. Once there I made my audio dispatch to this blog. It was a 6,000′ gain that took about 7 and half hours.

The view was excellent with Daniel pointing out the “Russian Alps” and all the famous peaks in the surrounding Caucasus Range. The Black Sea was to our west and the Caspian Sea to the east. Georgia was to the south and of course, Russia to the north. While a bit hazy, I felt the touch of all the cultures on top of this peak.

And also, I felt grateful to once again send the message of hope and urgency for Alzheimer’s.

We spent about 15 minutes on top and took about 4 hours to return to High Camp and Base Camp the next day. I will post a panorama summit video plus a video of my audio dispatch in the complete trip report.

OK, more details later when I get home and start preparing for Kilimanjaro in mind September! 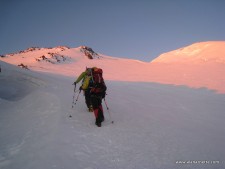 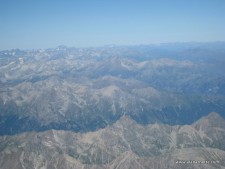 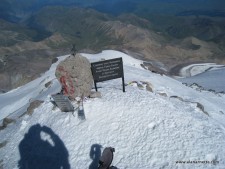