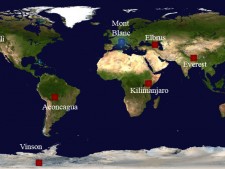 It has been a busy year! Starting in November 2010 with Antarctica’s Mt. Vinson, I have now climbed 6 of the 7 Summits and have only two left. OK, before you accuse me of using ‘new’ math, let me explain why there are 8; 7 Summits.

Back in 1981 a Texas oilman, Dick Bass, dreamed up the idea of climbing the highest peak on each of the earth’s continents. He looked at a map and  came up with 7: North and South America, Europe, Asia, Africa, Antarctica and … um Australia. Off he went and by 1985, he had climbed all 7.

While relishing his achievement, the world renowned mountaineer Reinhold Messner (first to summit Everest without supplemental oxygen) said, hold on, you climbed the wrong one! He went on to argue that the highest peak in the Australia/Oceania region was on the island of New Guinea. Carstensz Pyramid at 16,023′ was a real mountain whereas Australia’s 7310 foot Kosciuszko was a mere skill hill. Pat Morrow and a few months later, Mr. Messner, went out and climbed Carstensz in 1986 thus being the first climbers to complete all 8 of the 7 Summits.

OK, so time goes on and today we have the Bass list and the Messner list. But there is more controversy! Some in Europe feel that Mont Blanc at (15,771’/4807m) is the highest in Europe, not Elbrus (18,513’/5642m) which is located near the political boarder that defines Asia and Europe. But that argument usually falls on deaf ears.

However, what is a continent and what is an island? It seems that is also up for debate according to Wikipedia. Cutting to the chase, they say there are 7 and includes Australia

And then a few Australians, not ones to back down, point out that if you want a real challenge, try a volcano that Australia has in her territory on Heard Island – Mawsons Peak, 9005’/2745m which should represent Australia/Oceania. It is an active volcano about 2500 miles off the western coast of Australia e.g. the middle of the Indian Ocean and the island has no ports or villages.

But wait, there’s more! Conspiracy theorists say all this is nonsense and Hawaii’s Mauna Kea is the tallest on earth – forget Everest! It measure about 33,464’/10,200m from base to summit; starting at the sea floor – try climbing this one without supplemental O’s!

Chimborazo, a volcano in the Andes of Ecuador, is about 20,702’/6,310m above sea level. But if you measure starting from the center of the earth (I’d like to see someone start climbing there as well!),  it would be the tallest mountain on earth because it is located nearly on the equator, where the earth bulges the most.

I’m getting tired just writing this! Can’t we just all get along?

So, where do we stand. I am a climber; not a cartographer, politician or geography major. As such I kind of like using climber’s definitions. Mr. Bass hatched this crazy idea and executed. Mr. Messner climbed them all and, well, he is Reinhold Messner. So I say they are both right! OK, maybe I am a politician.

In any event, I am climbing all 8 of these 7 Summits. Oh and by the way, I climbed Mont Blanc back in the mid 1990 so my European friends will be happy! I am climbing Carstensz AND Kosciuszko in October.

But more to the point, I would climb the worlds 7 lowest summits in order to get out our message of need, hope and urgency on Alzheimer’s.