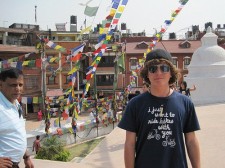 The first time I heard that an 11 year-old was climbing the 7 Summits, I dismissed it. 11 years old? Where does he get the money. Who will take him on these climbs? And, what does a 11 year-old know about climbing anyway.

Well a few years went by and I heard about this kid again, but this time he had climbed 5 of the 7 and was on his way to Everest. Whoa.

Jordan Romero is not your ordinary 8th grader and his father Paul is not your ordinary Dad. Jordan saw a painting at school showing the highest mountain on each continent, aka  the 7 Summits. He promptly went home to tell his dad that is what I want to do, climb all 7.

Like a good father, Paul pushed back thinking this was one of those things 10 year-olds say, like I want to be a pilot, or a policeman or the Chairman of Goldman Sachs.

Paul took his young son on a few climbs near their home in Big Bear, California. Still enthralled with the dream, Paul saw this an an educational opportunity and put the plan in motion. Using his knowledge and experience as a California helicopter paramedic, a trained rescue and high altitude medicine tech, he watched his child carefully for signs that it was too much.

On Kilimanjaro, Jordan had a tough time and thought about stopping; but he didn’t. Once he got past the mental crux, he gained his stride and sprinted the last few yards to the summit. On Denali, he found his groove and Everest became a realistic objective for them. They trained hard and as their plan gained more publicity, the critics came out.

There were three themes:

Also, some felt that just because a 10 year-old wants something, doesn’t mean they always get it. There is a reason US States wait to issue driver’s license until age 16. There is an age where individuals simply are not ready to make their own decisions.

However, there were serious concerns around their skills and a teenager’s physiology;

While there was debate on the motives, it was the plan that fueled even more debate. They would not go on a commercial expedition or use a western guide. They hired 3 Sherpas and base camp logistics from a Kathmandu company and would go on their own, make all their own decisions and answer to no one. They had no choice but to go on the, arguably more dangerous, north side because Nepal does not issue permits for climbers under the age of 16.

From what I could tell, Paul is a highly organized individual who puts logic above emotion. And he cares deeply for his son to achieve his dream. It was obvious that this was going to happen. Paul, and Jordan, had made up their minds; declared their intentions to the world and obtained a few small money sponsors. No one would, or could, talk them out of it. Critics be damned.

My pre-climb concerns for them focused in several areas. If this was about the goal and not records or publicity then:

But my largest concern was not if something happened to Jordan, what if something happened to Paul or Karen or one of the Sherpas. It takes huge manpower to conduct a rescue on Everest; as many as 10 Sherpas are required to conduct a rescue on the Southeast ridge for one incapacitated individual. With only 6 people, one a 13 year-old; how would they manage to keep everyone safe in the event of a storm, an accident or an altitude issue? This would be their first time above 8000m, much less almost 9000m.

So, concerns tossed aside, they traveled to Tibet with their 3 Sherpas and 2 cooks.

By now most of the free world knows that Jordan summited on May 22 with Paul and Karen and the three Sherpas. We watched on his SPOT tracker as he moved swiftly and smoothly with no visible problems.

On script, Paul was quoted on their website “Jordan not only climbed Mt. Everest, but he climbed with unbelievable strength and skill.”

In his post-climb press conferences, Jordan is positioning his climb as a way to encourage kids to get off the couch, a great message. He is also talking about his final climb of the 7 Summits, the Vinson Massif in Antarctica this Fall. And he added that he will be climbing Cho Oyu, another 8000m mountain.

With the benefit of his experience, however, Jordan is now quoted as saying he thinks no one younger than him should climb Everest.

Is it time for all the critics to eat crow? Yes and no.

Obviously everyone is happy and relieved that he came back safely with no frostbite or other current health issues. A sincere congratulation and tip of the hat goes to Paul and Karen and the 3 Sherpas whose names remain elusive.

However, no apologies for all the pre-climb concern and questions.

What the Romeros experienced was the opposite of the perfect storm. They had ideal weather, no crowds, a long enough weather window to climb from camp 2 and return safely. Manageable temps, low winds and good snow conditions. Luck or good planning?

Just three days later, a somewhat surprise storm hit the north resulting in frostbite and, potentially, contributed in some way to a climber’s  death.

You cannot plan out everything on Everest. Just ask Rob Hall or Scott Fischer’s families.

Now, the critics will not go silent but rather shift the discussion to the what-ifs and the slippery slope of records.

You have injected life and enthusiasm into the world of climbing. Please use your new found pulpit wisely.

Jordan has competed his goal by summiting Mt. Vinson, the highest peak in Antarctica on Christmas eve, December 24, 2011. His dad, Paul and stepmom Karen were with him along with guide, Scott Wollums. Jordan actually made all 8 of the 7 Summits by doing both Carstensz Pyramid and Kosciusko.

I am very proud of Jordan for sticking with his dream. He has used his new found pulpit to bring a message to kids that  exercise is good. He is embarking on a goal to reach the highest point in all 50 US States aka Highpoints through something he calls the B.I.G Tour. Jordan wants to tell kids that it’s about getting outdoors, being healthy, doing things as a family and setting goals.

Congratulations Jordan, Paul and Karen –  well done to all!