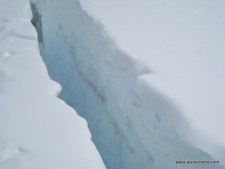 I was quite shocked to read the headline that Lincoln Hall had died at age 56 from mesothelioma, a cancer associated with asos exposure. He was exposed in 1965/66 while working construction.

My sincere condolences to Lincoln’s wife Barbara, thumb and their two sons.

Lincoln’s story is one of the most told about Everest. He developed cerebral edema after his 2006 summit from Tibet. He reached mushroom rock when he collapsed. His Sherpas did everything they could to revive and save him, including sticking a pen into his eye to see if he reacted; he did not.  Assuming he was dead, they left him taking his pack, water, food, headlamp, oxygen bottle, mask, and extra clothes. He awoke the next morning.

His wife was called informing her of his death and she informed their children of the tragic event. She found out he was NOT dead a day later when a family friend read an update on a news site. Hall was a member Alexander Abramov’s 7 Summits Club expedition.

Hall was rescued that next day by another team who happened upon him giving up their summit. Myles Osborne was one of the first to reach him and wrote:

‘Sitting to our left, about 2ft from a 10,000ft drop, was a man. Not dead, not sleeping, but sitting cross-legged, in the process of changing his shirt. He had his down suit unzipped to the waist, his arms out of the sleeves, was wearing no hat, no gloves, no sunglasses, had no oxygen mask, regulator, ice axe, oxygen, no sleeping bag, no mattress, no food nor water bottle. “I imagine you’re surprised to see me here”, he said.’

Hall was part of a 1984 team who climbed the Great Couloir route on Everest’s North face. He did not summit after reaching 8300 meters and dreamed of returning. In the meantime he became a prolific author and editor of an Australian outdoor magazine. He also helped to establish the Australian Himalayan Foundation, raised money for schools in the Himalayas.

The 2008 documentary “Miracle on Everest” did a nice job of capturing his 2006 experience. Ignore the error message and click the arrow to start the video from Nat Geo or go there direct.

Hall’s rescue was in contrast to the death of David Sharp a few days earlier where it was widely reported that 30 climbers stepped over his body on the way to summit and no one tried to help him.  As I have previously reported in an interview with Russell Brice, that is somewhat of a misconception.

Sharp was on a permit with Asian Trekking, choosing an “independent” climb meaning and he had chosen not to take a radio, had no Sherpa support and reportedly left late in the day. Asian Trekking, by design, only provided camp services and not guiding thus did not track Sharp and was notified after it was too late to bring their own resources to bear. All this continues to be debated today but in the end a climber died.

One of the biggest differences between Hall and Sharp was that Hall was mobile thus with the assistance of 10 Sherpas sent by Abramov, he was able to move on his own. Sharp on the other hand was completely immobile and moving a body at 8500m is virtually impossible. Helicopter rescue is not an option at those altitudes.

As we approach the 2012 season, I think about the almost certain deaths that will occur and how they will be reported; and my own experiences.

My teammate rushing down hill blurted out “Alex has died” and with that I learned that one of my teammates on Cho Oyu in 1998 had died in his sleep at camp 3 after his successful summit. The next morning I helped wrap him in his sleeping bag, drag him over to the crevasse edge and, after a brief ceremony, let his body fall gently into an abyss of ice and snow.

The experience had a profound impact on my climbing life.

Climbers die every year in the mountains. Sadly they are often reported in a sensational manner seemingly designed to sell not to celebrate. When a teammate or member dies on your expedition; it is a time of increased anxiety, personal introspection and deep sadness.

And for those back home; immense grief and confusion.

My wife, back home in Switzerland where we lived in 1998, saw a short text across the television screen “42 year-old man from Geneva area dies on Cho Oyu.” It shook her to her core as I matched the description perfectly; except she didn’t know if I was alive or dead.

In contrast, last year, 2011, when a teammate died on Everest, I was able to call her immediately using my satellite phone to let her know I was safe before she saw the news.

Operators struggle with deaths. Observers often don’t understand the reality of death in the mountains and families struggle to cope with the devastation; desperately seeing answers.

After reporting on climbing for over a decade, I struggle with each report of a death. My first thoughts are to the family, then the teammates and finally the public. I use a protocol to report deaths. My policy is not to comment until I have a first hand witness report and preferably more than one report that confirms the story then not to report names until it is clear the family has had an opportunity to be notified.

With everyone on modern climbs having sat phones or internet access, news travels fast – too fast. And on the mountain, it travels even faster; well at least rumors do. This instant information creates an environment where some people try to break the news first for whatever reason, others pass on unconfirmed rumors. While often done in the spirt of trying to be helpful; it often does the opposite.

The first priority is to notify the family. What is often not known is that the family may ask an operator not to make a public announcement. They may chose to manage their loss in private. The operator has an obligation to honor this request even if gives the appearance of a coverup.

The press wants to play the blame game, even if it is on the climber themselves. And of course we live in a litigious society thus saying nothing is almost always better than saying something.

I believe a simple statement acknowledging the event is always in order and helpful for all involved. It allows teammates to move on, operators to maintain transparency and families to receive support.

So as we go into Everest 2012, when you hear about a death, I will do my to report on it in the same manner I always have- with respect and accuracy. But please remember that many deaths are the result of bad luck, being in the wrong place at the wrong time.

Climb On (safely)
Alan
Memories are Everything

14 Responses to “Death on Everest and beyond: Lincoln Hall, David Sharp and sadly, more.”