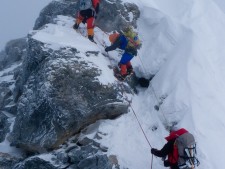 Multiple reports this morning say the jetstream has returned with a vengeance on Everest shutting down the carries and rope fixing. This was expected and teams on both sides have made remarkable progress over the past week as the new snow made conditions safer and faster. The South Col is stocked for many teams and the fixed line established at bit above the Col. I expect it will be fixed to the summit along with the first summit push later next week.

The Sherpas have stocked the highest north camp at 8300m – the highest, High Camp in the world; reports Phil Crampton of Altitude Junkies. Now they wait for the weather window. In an email to me this week, Phil said the north side is not crowded at all and they climbed only with a few Sherpas from other teams this week as they did a rotation to the North Col.

Andrew Lock, climbing without supplemental oxygen on the north, gave us an idea today of the conditions on that side -much different than the south:

… a couple of days ago, after a successful load carry to camp 2 (camp 5 in Mallory’s terminology) at 7700 metres, where I dropped a tent, stove, food, gas and various bits and pieces. The winds have been so strong that I didn’t erect the tent; just left the cache under a rock. No shortage of those up there, particularly this season with the wind having stripped the mountain bare. We’ve been hearing stories of expedition’s cancelling on the south (Nepal) side of the mountain due to rock fall; a result of the very dry season. On our side however, the mountain conditions are ok. Our biggest issue is the wind.

Over the past ten years, Everest has become increasingly crowded. The long lines of climbers queued on the summit push create bottlenecks that costs many climbers their fingers, toes, dreams and sometime lives. Guides have struggled to control the crowds through coordinating summits pushes, duplicate safety ropes and staggered start times.

2012 looks to test all these techniques as the warm weather, now heavy snow have delayed fixing the rope to the summit thus compressing the schedule slightly. However, 45 climbers and Sherpas are no longer climbing this year due to the pullout of Himex so it may not be that bad. Also, it is rare to only have one summit weather window.

The leaders regularly meet to coordinate many aspects of their Everest expedition. They work together on who will ropes and pickets, transport them to base camp and then to fix them above the Icefall. As for camps, each team is on their own establishing and maintaining their camp using their own Sherpas. But when it comes to summit night, some teams try to keep their schedule a secret in order to get a jump on the others. But on Everest, there are no secrets, especially within the Sherpa community.

It is quite common to have many, many teams staged at the South Col based on a good weather forecast. Guides will approach start times differently with some preferring to start early if they have a slower team or later if they feel their group is strong and fast. It is common for leaders or Sherpas to survey one another on the South Col to get a feeling of the schedule for that night. But things change on a moments notice with new weather information or gut feelings so the laid plans may come apart. In the end, each team leader is responsible for their team’s safety and success and will do what they feel is necessary.

This is the biggest fear and the result of poor coordination, rouge leaders or bad luck. It is quite common to have a large group that moves together as one unit but very slowly. They create a massive strain on the route and slows everyone down. Passing is possible but difficult. It requires unclipping from the fixed rope, climbing freely and faster than the large group for a relatively long period. If can be a dangerous move.

But it may be right move as getting caught in a slow climb can be deadly as you use limited supplemental oxygen, risk the weather deteriorating or become very cold resulting in cold feet, hands or even frostbite. This will end your climb if not your climbing career.

Dual ropes help on the difficult sections but are not a panacea. It is very useful on the Lhotse Face which is somewhat wide and accommodates dual ropes – one for climbing up and one for going down. Believe it or not, it is quite common for climbers to get these confused resulting in a sharp correction from a nearby vocal climber!

The section above the Balcony, the Southeast Ridge, the Cornice Traverse and Hillary Step experience bottlenecks due to the extreme altitude, slow climbers, fatigue, narrow, rocky and difficult terrain. There are rarely dual ropes. Remember that every ounce of rope and pickets must be carried by a Sherpa and attached to the mountain each season – there is no reuse of last year’s lines.

On the Hillary Step, as shown in this post’s picture, is very narrow with most climbers preferring to climb the crack in the rock wall to the right and not stray too far towards the mile high drop offs. So it is common when climbers get backed up for a Western guide to assume command and direct traffic allowing down climbers to get off the summit by stopping the up climbers at the base of the Step. Yes, a high altitude traffic jam.

The strategy is to get out of the South Col early – maybe 8:00 – climb fast and get down fast. This sounds easy but can be extremely difficult if you are not at 100%. One issue with leaving early is they might summit before dawn, which is about 5:00AM on Everest in late May, and it will be the coldest conditions. It should take 7 to 10 hours from the South Col to the Summit. As they descend they will still have to deal with climbers going up.

The other approach is to leave very late, after midnight and accept the risk of summiting in mid to late morning and descending in the early afternoon. This is risky if they are not moving fast due to storms developing after noon. But even leaving late they will encounter long lines of climbers descending.

There have been multiple reports of the weather window emerging around May 18 – 21. It is extremely rare for there to only be one window.  So I expect to see some teams push hard to get the first window and others will be content to wait for the next one.