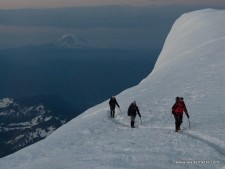 As we prepare to leave for our Rainier climb in a couple of days, doctor lets take a look at this popular mountain and its climbing opportunities. Mount Rainier National Park was established in 1899 and has around 1.8 million visitors each year with about 10, 000 climbers.

Rainier is the tallest US volcano having last erupted between 1820 and 1894 with another event expected at some point. The summit crater is over 1, 000 feet wide with three summits, the highest being Columbia Crest at 14,411 feet.

The biggest issue on Rainier, like most mountains near oceans, is weather. The primary park town of Paradise receives 126 inches of rain annually. It claims to be the snowiest place on earth where snowfall is measured regularly receiving as much as 93 feet of snow in the winter of 1971/72 and boasting a record snowpack of 30 feet in March 1955.

Climbers regularly get stormed out by Pacific fronts that dump rain and snow year-round making a summit of Rainier special anytime of the year.

I think a Mt. Ranier climb is one of the very investments for anyone aspiring to climb higher and more difficult mountains. With easy access, ample guide services with climbs and classes or going with qualified friends, it can be both a learning as well as a climbing experience of a lifetime.

A detailed look at the statistics provide by the National Park Service reveal some interesting insight. Over the past 10 years, roughly 9,000 to 11,000 climbers attempted the summit annually with about half reaching the summit. Sadly there are several deaths each year

As you would expect, the prime climbing time is the summer but especially starting around early June with 300 to 500 climbers per week, peaking at the end of July with 800 climbers on the mountain each week and dropping off dramatically by late September back to several hundred. While Rainier is climbed year round, you could be alone from November to May – not a good idea!

Mount Rainier offers over 60 climbing routes ranging from moderate to world-class. All require proper training, skills and gear. Of all the routes, four dominate the mountain by a huge margin:

As for summit rates, The NPS did not publish separate stats for guided vs independent other than the 46% number for total climbers last published was for 2010 with 4920 out of 10643 summiting. The three companies do not make their rates readily available on their websites which is somewhat strange.

Somewhat unique across the world is the presence of Park Climbing Rangers in the US National Parks. These individuals are there to protect the environment while supporting climbers through education, information and rescues. On Rainier, there are two permanently staff Ranger Huts at the high camps of Muir and Schurman. Each year, the Rangers do regular patrols reach the summit nearly 200 times. For Rainier, they maintain an excellent website for current information. Sadly one Ranger died from a fall during a rescue this year.

We will climb the Emmons-Winthrop Glacier route, which has a total elevation gain of 10,060 feet. With our packs loaded with tents, bags, stoves, fuel, food and technical gear, we will leave from the White River Ranger station at 5,100 feet. and begin the hike to Camp Schurman, stepping onto the smallish InterGlacier where we might rope up depending on conditions. It should take about 7 hours. That night we will camp at 9,500′ at the edge of the Emmons and Winthrop Glaciers.

Early the next morning before dawn, we’ll start for the summit leaving camp roped up for serious glacier travel. Now our packs will be lighter but filled with extra layers, water and a bit of food as we plan on making steady progress up the huge Emmons – Winthrop snow and ice fields watching carefully for hidden crevasses, soft snow bridges and other glacier dangers. The angle will not be horribly bad, perhaps topping out at 45 degrees but still enough to test our fitness and cramponing skills.

If all goes according to plan, it should take around 6 hours to climb the 4,910 feet to the summit and about the same to return, perhaps less, but overall a 10 hour day. We will celebrate that night back in Camp Schurman.

This has been a difficult season on Ranier with heavy storms now strong sun creating a wide range of conditions. The Ranger Blog however reported some good news this week saying about the Emmons-Winthrop route:

The route itself is currently in great shape, heading up the “Corridor”, then taking a hard climbers right and weaving through a beautiful traverse full of blue seracs, and ice walls before exiting out onto the Winthrop Glacier at roughly 11,800 feet. While this traverse is spectacular for scenery, parties shouldn’t linger in this area for too long, as some of the seracs and ice walls are prone to producing ice fall in the mid-day sun. Once out of the traverse, the route switchbacks straight up the smooth Winthrop shoulder for 2,000 vertical feet with only a handful of crevasses to step over, before slowly trending climbers left and across the bergschrund, which currently, is still passable by going directly up and towards Columbia Crest. Once across the ‘Schrund, the angle of the slope eases, and follows the gentle slopes to the crater rim. There are only a couple of crevasses beginning to show, one near the top of the second “pressure ridge”, and one just below the rocky outcrop that leads down hill from Camp Curtis. Both are visible, and easily avoidable, but use discretion in the coming days as these will surely widen and melt out more.

We will travel in two teams of three climbers roped together using 8.1mm rope carrying one long handled ice axe each. We will all have crevasse rescue/extraction gear on our harnesses including carabiners, rapell devices, slings,  prussic loops. Additionally as a team we will have multiple snow pickets, ice screws, flukes, cord and slings plus a shovel.

These are some pictures of my 2004 climb of the Disappointment Cleaver route: 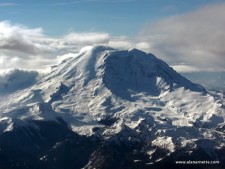 Mt. Rainier from the air 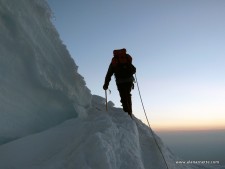 Climbing at Sunrise on Rainier

Climbing at Sunrise on Rainier 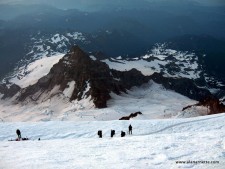 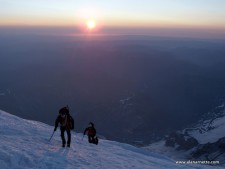 Sunrise on the Dissapointment Cleaver Route 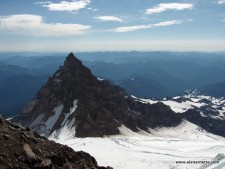 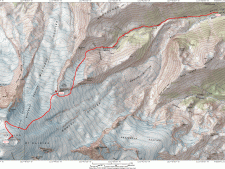 I will try to do a post with pictures along the way depending on communications availability but definitely will do a full trip report as usual upon my return.