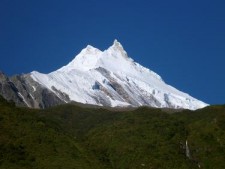 A deadly avalanche occurred on Manaslu in Nepal at 4:30AM on Sunday, September 23 killing at least a reported 9 climbers with another 6 missing. Another 10 climbers were impacted but escaped. It occurred at the 7000 meter (22,960′) level with the slide hitting Camp 3. News reports say that most of the victims were Nepal, Spanish, Italian, German and several French. One Canadian climbers was in the missing.

There were about 25 climbers in the area at the time of the avalanche all preparing for their summit push. Reports from teams on the mountains say that the avalanche blast destroyed many tents at Camp 2 but there were no serious injures.

As always, be wary of many of the reports given it is still early, and details are often incorrect and many of the witness are in shock. No names are available.

There were 30 teams with about 231 members, climbing Manaslu, an unusually high number due to the closure of the China/Nepal boarder preventing teams from reaching Cho Oyu, popular for climbers to test themselves at high altitude or on training for Everest.

At 8,156m (26,670′), Manaslu has become a popular alternative to Cho Oyu after organizers have had difficult getting reliable logistics and permits to climb Cho Oyu. Being entirely within Nepal, the logistics are slightly easier although the climb itself is a bit more difficult. Manaslu is located in western Nepal about 60 miles northwest from Kathmandu in a very different region than Everest

Manaslu is known as one of the less technically demanding 8000m mountains and is viewed as a precursor for Everest much in the same way as Cho Oyu. But the weather is always difficult on Manaslu and 2012 has seen extremely deep snow with heavy snowfall all last week locking the teams down in their base camps.

There have been less than 350 summits but about 55 deaths making Manaslu a deadly climb. That said, 15 of those deaths were on a South Korean expedition in 1972 and of those, 10 were tragically Sherpa. For comparison, Cho Oyu has seen about 2000 people summit it with about 50 deaths.

Almost all the regular teams climbing Everest had expeditions on Manaslu this season. The deaths and injures seems have been mostly on European teams located at Camp 3. The following teams have checked in via their blogs:

This report noted that the injured had already been helicoptered to Kathmandu hospitals including several Nepal Sherpas, 3 French, and 2 Germans. The poor weather was returning last Sunday thus slowing rescue and recovery efforts. However pilots have reported locating bodies from the air.

More details as solid information is available. My sincere condolences to families, teammates and friends of the fallen. 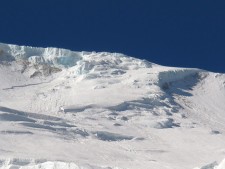 The avalanche was caused by a large serac releasing above Camp 3 at 7,400m. This triggered a slab avalanche which hit Camp 3 directly and impacted Camp 2 with a severe wind blast. It appears that many of the 11 killed were in their tents, most sleeping, at Camp 3 around 4:45AM Sunday September 23, 2012 Nepal time.

The avalanche debris was spread from 7,400m to 6,300m. Rescue efforts started immediately with teams climbing up from Camps 1 and 2. Russell Brice reports on his recent blog post that he became a defacto rescue co-coordinator and called Kathmandu for helicopter assistance. A B3 high altitude helicopter from Simrik Air arrived at 9:45 and began evacuation of the injured climbers. There were 18 total flights that day with 14 evacuations. 31 people were caught in the avalanche. 8 bodies were recovered and 3 are listed as missing and presumed dead (see update 3.1 below).

The severity of the avalanche was driven by heavy snow the previous week, some reports put the snow depth at 6 feet of fresh powder.

The remaining teams are mixed in their plans with some individual members leaving, some entire teams (estimated at 10 or more), including IMG, AAI and Jagged Globe. Some remaining to continue climbing. However, reports mention difficult conditions on the upper mountain, with high winds and, of course, the fixed line will have to be reset or replaced.

My deepest condolences for the families of the victims, their teammates and friends.

The search has ended Monday in Nepal for any survivors according to French mountaineering officials out of Chamonix. They stated that six of the victims were French nationals. If confirmed this would bring the death toll to 11. Jagged Globe reports that the avalanche was 300m wide and 1000m long,

Phil Crampton of Altitude Junkies has posted a first person report from Camp 2 where he and his team were hit by the avalanche blast. Visit his site for a picture of Camp 2 after the avalanche.

Today the remaining bodies have been removed from the mountain by three different helicopters. Hopefully this is the end of the tragedy that struck us yesterday morning at 4.30 am. All of our team members and Sherpas are safe at base camp. Several of us suffered cuts, bruises and concussions but nothing serious. We consider ourselves very lucky indeed.

We placed our camp two in the same position as we have done on all our previous expeditions. The campsite is protected from avalanche debris by a large crevasse which collects anything that slides. Due to the force of this avalanche we were protected from debris but the blast from the huge slide destroyed our campsite.

At 4.25 am I was awake fiddling with a awkward sleeping bag zipper. I had just laid back down and then at 4.30 am I was struck in the head by some avalanche debris and then Kevin and I were catapulted around in the tent several times before coming to rest in a destroyed tent with myself ending up on top of Kevin. All of our eight tents at camp two were destroyed and all of the team members and Sherpas had the same experience as Kevin and I.

All of our team members and Sherpas acted amazingly in the situation. Everyone was calm and collected even though it was dark and many were without suitable clothing and footwear. We eventually collected all the gear we could find and in the end we were only one boot missing. Many of the team spent several hours waiting for us to retrieve their footwear before descending down.

A Sherpa who was swept down the mountain from camp three stumbled into camp two suffering from head injuries and frostbite as he was caught in the slide and descended without boots. We stabilized the Sherpa and requested a helicopter. We thought we were going to lose him at one point and I was given priority with evacuation over the camp three survivors who were stable. I am glad to say I spoke with the Sherpa this morning as he was about to board a helicopter for Kathmandu.

More details from the Himalayan Times: Update- these names have been confirmed.

We found a massive debris field, and climbers who had survived the avalanche,” wrote Madison in an email. According to Madison’s count, the French team lost five members. The German Amical team lost one, the Italian team lost one of its climbers and a Sherpa, and British commercial outfitter Henry Todd’s Ice 8000 team is missing two climbers, and one Spaniard is confirmed dead. The names of the dead and missing won’t be released until family members are notified.

23 September, 2:21 pm – Just got a call from Glen Plake in Manaslu Base Camp who told me this: “I’m OK, a bit beat up; missing some teeth and a bruised eye but write in big capital letters, GLEN PLAKE IS ALIVE AND HE’S COMING HOME.

“It was a major, major accident. There are up to 14 people missing. There were 25 tents at Camp 3 [6800m] and all of them were destroyed, 12 tents at Camp 2 [6300m] were banged up and moved around. Greg and I were in a tent together, Rémy was in another. It was 4:45a and I was in my sleeping bag with my headlamp on reading my devotional when we heard a roar. Greg looked at me and said, “That was a big gust of wind,” then a second later, “No, that was an avalanche.” Then it hit us. I was swept 300 meters over a serac and down the mountain and came to a stop still in my sleeping bag, still inside the tent, still with my headlamp on. We all went to sleep with avalanche transceivers on so I punched my way out of the tent and started searching. I searched for 10 minutes before I realized I was barefoot in the snow. Greg had been using my down suit for a pillow and I found my suit, I found everything that was in my tent – camera, sleeping bag, ski boots. It was like someone had thrown my gear in the back of a pickup – but there was no sign of Greg. Rémy and his tent are nowhere to be found. The Dynafit crew [Canadian skier Greg Hill’s team] were sleeping at a high Camp 2 and were immediately on site to rescue people. Sergio, Stephane, Doji our Sherpa – all strong alpinists – have all come up to search. We’ve done three searches but when the fog rolled in we had to call it off. It was a massive serac fall, probably 600 to 700 meters across. It’s a war zone up here.”