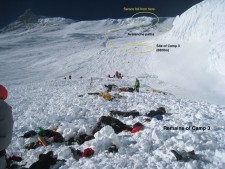 The fall 2012 climbing season is winding down after a difficult season. Between high winds, heavy snow and avalanches; there were only a few summits on the world’s largest peaks and, sadly, many deaths. There is action on Everest again this Fall so the season is not quite over.

Here goes the round up:

Only a few teams attempt Everest in the fall due to shortening, cold days and the quickly approaching winter snows. But we have two teams up there right now, both on the south side.

30 year-old Japanese Nobukazu Kuriki is doing something almost unheard of in modern times. He is doing a solo climb, without supplemental oxygen of the West Ridge on Everest in the Fall. Any of those characteristics would be impressive; all of them are amazing beyond imagination.

He has been diligent in keeping us informed through Facebook, Twitter, and his website. Today he is at Camp 2 fighting high winds planning to climb the wall of the West Shoulder of Everest and onto the West Ridge proper. From there he hopes to establish two more camps before the summit. He has been optimistic reporting the low snow we saw in the spring continues giving him hope he can make it.

A Korean team (no link available) is also attempting Everest via the traditional South Col route and another effort is by the Polish Mountaineering community on Lhotse. By the way, the world oldest Everest summiter Min Bahadur Sherchan at 76 years 340 days, wants to return in the spring of 2013 at the age of 81!

Makalu at 27,825′ (8481m) is not nearly as popular as Everest, Cho Oyu or even Manaslu due to being more remote and a significantly more difficult climb.  And this year proved that to be true with no summits on the world’s fifth highest mountain. One interesting if not downright strange, story came from well known journalists now climber, Billi Bierling climbing with a team lead by respected Swiss outfitter Kobler and Partner International. Billi reported that

.. our five Sherpas ascended further to establish what they thought would be our camp 4. The problem was that none of our Sherpas had been to Makalu before and even though they had looked at pictures of the route, they completely missed the way.

This is quite rare for a commercial operation. A few teams unsuccessfully attempted it this year, all stopped ultimately by high winds. Over on Dhaulagiri, there were similar results with a few teams halting the climbs due to unstable conditions.

Such a sad season on the world’s 8th highest peak. The death toll is now 12 from the September 23 avalanche. One more died in the hospital this week.

The avalanche was caused by a large serac releasing above Camp 3 at 7,400m. This triggered a slab avalanche which hit Camp 3 directly and impacted Camp 2 with a severe wind blast. It appears that many of the 12 killed were in their tents, most sleeping, at Camp 3 around 4:45AM Sunday September 23, 2012 Nepal time.

The avalanche debris was spread from 7,400m to 6,300m. Rescue efforts started immediately with teams climbing up from Camps 1 and 2. Russell Brice reports on his recent blog post that he became a defacto rescue co-coordinator and called Kathmandu for helicopter assistance. A B3 high altitude helicopter from Simrik Air arrived at 9:45 and began evacuation of the injured climbers. There were 18 total flights that day with 14 evacuations. 31 people were caught in the avalanche. 8 bodies were recovered and 3 are listed as missing and presumed dead.

The severity of the avalanche was driven by heavy snow the previous week, some reports put the snow depth at 6 feet of fresh powder.

Almost all the teams left feeling it was not a good year to climb Manaslu. But a few teams remained on the mountain after the avalanche and their efforts payed off with summits from Himex (20) and Altitude Junkies (15) and a couple others. One of the most impressive summits however was by Benedikt Böhm who climbed alone to the summit and skied back without supplemental O’s. EpicTv has a nice story on his achievement.

My deepest condolences for the families of the victims, their teammates and friends. This short video is by Himalayan Ascent of the recuse and recovery efforts:

This week, another avalanche took the lives of two world-class climbers on the north face of Annapurna in Nepal. Uzbekistan climbers Iljas Tukhvatullin or Ivan Lobanov were hit by the avalanche between camps 1 and 2 around mid afternoon. Heavy snow had been reported over the previous week. Reports from the site, Russian Climb, speculated the cause of the avalanche was an earthquake given the “whole icy slope fell.” Annapurna at 26,545′ (8091m ) is known for deadly avalanches. Another team attempting the summit from Russia has now called their expedition as weather has worsened across the Himalaya.

Joshua Lavigne and Jason Kruk , both Canadian climbers, took a new route direct up the North Face of Mt Alberta (3619m) in September. This is the video but visit the EpicTV site for some astonishing still shots.

The next big climbs in the Himalayan include Ama Dablam. Around the rest of the world, teams are preparing for Mt. Vinson in Antarctica and Aconcagua in Argentina, Carstensz Pyramid in New Guinea and of course hundreds of others around the globe. Let’s hope those climbing Carstensz Pyramid have better luck than a New Zealand team in August who were held by the local natives for ransom forcing them to abandon their climb. All it took was the tidy sum of $3500 for their freedom! Safe climbing to all.

The world of high altitude mountaineering is always full of interesting characters, extreme personalities and cloak and dagger operations. Under the cloak label, look for some new efforts to find Sandy Irvine and that infamous camera next spring on Everest. As for dagger, well we all remember Russel Brice’s decision to stop his Everest 2012 spring climb. It seems this decision may have contributed to the departure of his longtime guide Adrian Ballinger and team physician, Monica Piris.

While not naming names, In Brice’s recent update from Manaslu he offers a public apology for “… many of my past members received unsolicited publicity from one of my previous employees promoting his new services in competition with me. I am sorry for this, as Himalayan Experience does not promote in this way, and we especially do not use a stolen address list. My apologies for this unethical behaviour.”

After looking at the Alpingow website for details on what you get for an extra $22,800,  I can pinpoint only a few real items that others don’t claim: 100% imported food, unlimited wifi at EBC and Hypoxico tents for acclimatization then helicopter transport to and from EBC. Sadly, I think this misses the point of a Nepal climb by skipping the Khumbu, but just imho. If you want to trek in like everyone else, the charge is still a very high $74,000.

If you love climbing as much as I do, you recognize the achievement of those who set the way. The film “El Capitan’ is one of the climbing classics documenting the legendary rock wall. Filmed in 1968, now there is an effort to restore the film using digital technology and they are looking for support. Read the details at kickstarter.com.