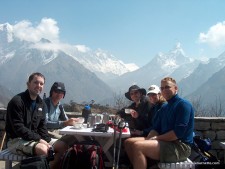 Everest View Hotel with Everest and Plume behind

Like a herd of gazelles on the Serengeti, climbers and trekkers are moving methodically towards Everest Base Camp, and their dream.

The trails between Lukla and Gorak Shep are filled with thousands who keep one eye on the trail and the other on the skyline. For many, this is a trip of a lifetime, for others it is the beginning of a quest.

The large commercial climbing teams will often offer a trek. For the trekkers, it is a great way to see the Khumbu and to get to know aspiring Everest climbers. For the climbers, it is nice to get to know people other than your climbing team whom you will live with in close quarters over the next two months.

Usually western guides and part of the Sherpa team will be along to point out the sights and lead the way from tea house to tea house. 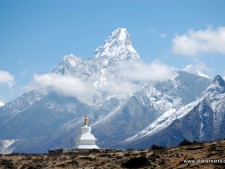 The Khumbu has changed dramatically over the past couple of decades. The teahouses have improved over the ones with poorly ventilated, dark and cold rooms. Today, the newer ones have large windows, big tables seating entire teams and excellent food and service. The sleeping rooms are still tiny, cold and dark; but after a long day trekking most people don’t care.

The typical schedule is similar to this one:

Many climbing teams now add climbs of smaller trekking peaks to aid in the acclimatization process. Climbs of Lobuche East or Island Peak (Imja Tse). These 6,000 meter climbs can be difficult but are within the skills of Everest climbers.

UK Guide, Tim Mosedale describes his thoughts on getting to EBC:

5 of us are taking a leisurely 3 weeks to trek in to Everest Base Camp and I’ll be taking them over 3 high passes along the way. We’re crossing The Renjo La, The Cho La and, after a couple of days resting at Dingboche, we’ll be crossing the Kongma La as well. We will be sleeping a few hundred meters below each pass – the idea being that we are spending time at higher and higher altitudes prior to arriving at EBC. We are also ascending a peak called Pokalde as part of our acclimatisation which is just short of 6,000m. 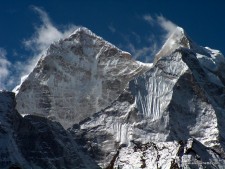 In late March the weather is still cool, in fact cold at night. But once the sun shines, it is very comfortable. Hopefully the clouds from the long winter have cleared away providing magnificent views of Ama Dablam, Thamserku, Kantega and of course Everest.

Everest is often sighted on the uphill walk below Namchie. However, most people miss it as you have to go slightly off trail and look between the high mountain ridges.

Once at Namche, almost a right of passage, is to go to the Everest View Hotel. Once a high-class lodging designed primarily for Japaneses visitors, it offers one of the s of Everest during the trek.

One of my memories is sitting on the hotel deck at one of the picnic tables, drinking coffee and eating fries (pretty civilized, huh?) staring at Everest off in the distance. It looked huge. The westerly winds of the jet stream creating the signature plume. It looked huge, high and forbidding. Everest was not open for business that day.

It is a magical moment for each person to see Everest. No picture, video or story can touch your inner emotions like seeing it for the first time.

Today, Saturday, teams are reporting in on their progress. There are mixed reports of clear, cold days but some cloudy, rainy ones as well. Base Camp updates reveal snow. It is starting to feel a lot different than last year when we heard stories of a “dry year”. Snow is good for the mountain climbers, but not too much!

The Icefall Doctors are making great progress getting the fixed lines set into the Western Cwm. But we are weeks away for most climbers to start the serious stuff. Now their job is to focus on the present. Enjoying every moment.

Climb on!
Alan
Memories are Everything

Personal Note: I want to thank everyone for their kind comments and emails as I startup my Everest 2013 coverage. It is nice to see old friends back and many new names in the comments.

7 Responses to “Everest 2013: Trekking the Khumbu”