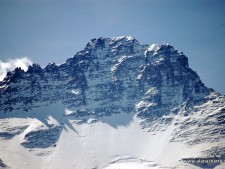 Just a quick update today as teams are still on the trek to Everest Base Camp. Many of the updates are about what they are seeing, here and feeling along the way. However, this may be the strangest collection of updates I have ever posted!

I’m seeing several reports of stomach issues the past few days. This is fairly common as Westerners adjust their systems to the local food. Most climbers will get things sorted by the time they arrive at Base Camp.

Steve Whittington gave us this insight:

I was suffering from a G.I. bacteria that has worked it’s way through almost every team member. I was feeling so bad that every day after the trek I just reed into my sleeping bag for the night.  The pre-everest weight I had put on is already starting to shed. Namche!

To further complicate this situation, climber Dave Mauro posted this about the accommodations in one teahouse:

There were two twin beds and a bare incandescent light bulb hanging from the ceiling. The Proprietor explained there were only 3 working toilets at the Inn, and they did not work particularly well. We were instructed to place toilet paper in a waste bin instead of flushing it down. All of this might be off-putting if not for the simple fact it was still much better than tent camping  …and this was Nepal.

But David Tait’s post is one of the most disturbing I have ever read, and I mean that with a smile on my face. His wife is on the trek with him to EBC and dropped her sunglasses down the ‘hole’. David, being a fine British gentleman, went for the rescue. This is bathroom humor at its worst or finest depending on your stomach:

… Owing to the fact that she didn’t have a spare pair, and sunglasses are crucial at altitude, I elected to try and rescue them, which entailed plunging my hand into the foul recess and praying. Sadly “u” bends had not been employed and it appeared the glasses were lost forever. Trying not to gag, I set about trying to scrub the filth off my hand – and thought I had done a good job.

Minutes later dinner was served; potatoes, tinned tuna, coleslaw and pita-bread. No sooner had I swallowed the last mouthful, I started to feel “strange” …

You must read the rest as this is the first Blog of the Day of Everest 2013.

I like this update from the US Air Force (USAF) team as they landed in Lukla:

So, what I anticipated to be a terrifying flight actually became a hilarious nerd-fest for our team’s aviation enthusiasts (picture five guys crowded around the cockpit cracking jokes about how ridiculously outdated the controls of our plane was and then promptly arguing over who would be more capable taking control if the pilot became incapacitated).

Anyway, we landed safely and the rest of the day turned out to be really pleasant as we weaved our way up to Phakding. It was awesome to finally be out of Kathmandu and into a world that is absent of gas powered machinery. Everything from here on up is powered by people and Yaks and the strength of that effort is amazingly impressive. In my mind, seeing the Sherpas lug loads up the valley affirmed their status as the world’s premier badasses. Some of them were portering giant loads that easily weighed 200 pounds—and keep in mind most of these guys are barely 5’ 6”.

It is quite common to have strange dreams at altitude. Chris Jensen Burke tells us of her’s and the aftermath:

On my first night arriving at Namche, I had my first altitude dream of the trip.  I made the ‘mistake’ of sharing it with the team.  It had a lot in it to do with the wilds of Africa and several hundred gorillas (!!).  Warren, who works at Taronga Zoo, decided to interpret the dream … On the way down, Sumit wanted to take an ‘action shot’ of the team and Warren broke into an impersonation of the late and great Steve Irwin.  I’m a big fan of the late Crocodile Hunter and I was in stitches.  It was way too funny.   At every other opportunity on the walk, other team members brought my gorillas into the conversation.  You can tell we have far too little to occupy our brains (and too little oxygen) at altitude!

Let me end this section on different note. The trek often causes people to become introspective, this is a good example from Melissa Arnot , who has summited four times and is leading a womens trek to EBC and working to support Sherpa families killed while guiding. She is going for her fifth summit this year:

Seeing Everest for the first time was emotional for much for the group, including me. It’s hard to wrap my brain around exactly how special that mountain is to me. The goddess that lives in the mountain is said to ride a tiger and hold a basket of fruit in her right hand, and a mongoose that spits wealth from her left. The mountains around offer support and have goddesses of their own. As I look around at the sun cresting the other peaks, I can feel the energy of that support, and I know I am in the right place.

Not all climbers are going for Everest. Lhotse at 27,940 feet or 8516 meters is the world’s 4th highest peak and is increasing in popularity. It is often termed slightly more technical than Everest due to climbing a narrow, rock filled gully on the final summit push. But a Lhotse expedition is 90% identical to an Everest climb. You follow the same acclimatization schedule, use the same camps from Base Camp to Camp 3 on the Lhotse Face.

But the departure occurs when everyone is going for their respective summit pushes. Leaving Camp 3 at 23,000′ climbers cross the Yellow Band. Soon thereafter, Everest climbers continue up the Geneva Spur to the South Col while Lhotse climbers take a hard right and continue straight up the steep face.  No, there is no signpost! 🙂

I did an in-depth report comparing Everest and Lhotse last year.

OK, that’s all for today. Sounds like our climbers are having a good time!

Personal Note: A deep and sincere thanks to all who have made a donation to one of the Alzheimer’s non-profits. You are what keeps me going for this coverage.