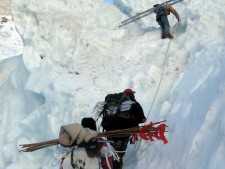 The Doctors taking ladders into the Khumbu Icefall

The death of Icefall Doctor, search Mingma Sherpa, is still echoing throughout the climbing community. Anytime there is a death, it shakes the Sherpas and climbers to their core. It causes everyone to consider their goals, to think deeply about why they are there. For some it is a job, for others it is a dream; but for all it is a risk.

Everest is often dismissed as an “easy walk-up” but the sad reality is that every year people die. It is part of high altitude mountaineering.

When a Sherpa dies, the implications are wide. The novice climbers reconsiders their own skills, their own capabilities and frailty. The Sherpas, mourn the loss of a friend, a teammate, probably one of their extended family members. Everyone struggles to makes sense of the tragedy.

The Sherpas have great experience and strength. Many have amazing climbing skills. Others are learning more at the Khumbu Climbing School,  started by Conrad Anker and funded by the Alex Lowe Charitable Foundation. It is located in Phortse, Nepal (in the Khumbu) and offers eight and ten day classes in the off season.  Started in 2003, over 700 Nepali, both men and women, have gone through the program. You read more in this excellent article. A fundraiser is being held on April 20th.

But it is time to acknowledge the loss of one devoted climber and of the selflessness of our own Sherpa team, who played a key role in the rescue effort. Chherring Dorje flew by helicopter to the scene and managed the retrieval while Lam Babu conducted things from the heli-pad at Everest Basecamp. Although there was a sad outcome, I was extremely proud that our partners were able to offer help to the Icefall Docs, whom we admire very much. This small team of about a half dozen men are hired by the National Park to establish and maintain the route through the Khumbu Icefall. It is physically demanding and dangerous work.

The docs do an incredible job each year, and the same men come out year after year. They never boast or recognition… They aren’t rewarded by being able to tag the summit and run up their “count” on the mountain, and they are paid modestly. Mingma was from the village of Dingboche and leaves a wife and several daughters. Of course many of us will try to help out with donations… Mingma was working on our behalf… but there is no getting around the reality: this dangerous work has once again taken the ultimate toll.

The US Air Force team adds some thoughts on the role of the Sherpas:

As most everyone who has read about Everest climbs knows, the Sherpa are the heroes of the Himalaya. Almost no western climber has any chance of getting to the summit of an 8000 meter peak without the enormous contributions of highly trained Sherpa, and that support begins long before you even get to base camp. Climbers tend to get all the attention on an expedition, but just like an Air Force pilot who gets to wave at the crowds at an airshow, he or she wouldn’t be there without dozens of other people to support them.

Georgina Miranda has a wonderful post today as she continues her trek towards Base Camp. She reveals many lessons she is receiving from Lama Geshi and the Sherpas. It is the Blog of the Day. This is an excerpt on meeting Lama Geshi:

His soul beams joy and was really a special to meet him. As part of the blessing, he gives the climbers a card to take up with us to the mountain, a blessed Kata, and a blessed Synge to put around our neck. He also gives us a prayer to take with us on our journey and to set our intention. This time the prayer was:

The Buddha said: You yourself are your own refuge, Nobody else can be your refuge. If you really tame your mind, You can attain the highest realization of the Buddha! May the precious mind of enlightenment, Arise where it has not arisen. Where it has arisen, may it not wane, But further and further increase.

It also has a request to all sentient beings on Earth:

Give up all intentions to harm others from your heart, and do your to benefit them all. If each and every one feels the Universal Responsibility to do so, we will all enjoy the feast of PEACE!

Chris Jensen Burk, climbing Lhotse with Himalayan Ascent, has has a nice recap as she is now in Base Camp and looking to go to Camp 1 on Friday:

Oh, but to put our mountain movements into perspective, our Sherpa team has already been through the icefall TWICE (in each direction) carrying loads (including tents). First time they went to C2 and second time they went to C1. They are there and back before you can flutter an eyelid. These guys are LEGENDS. They open the Himalayan mountains to western climbers. They are amazing.

Ueli Steck, attempting a new route with Simone Moro posted this on his time in the Khumbu:

Only four days ago we flew from Kathmandu to Lukla. We stayed an extra day in Namche Bazar, just to let the bodies get used to the altitude. This is exactly what we will be focusing on over the next couple of weeks: Getting used to the thin air. As usual I cannot just sit around. The extra day in Namche I used to run to Tame. It’s a perfect run, not steep, quite a flat trail, so it is possible to run even at these higher elevations. If I think back to when I tried to get prepared for this Expedition a few weeks ago. I stayed overnight in the Mönchsjoch hut (3600 meter) where there is only glacier and snow. I climbed up several times to the top of the Mönch and I remember standing on the summit in minus 30 degrees celsius temperatures. Now I am running in shorts and t-shirt towards Tame more or less at the same altitude. I realise it is definitely easier to get acclimatised here in the beautiful Khumbu Valley!

As for the teams traveling to the Chinese Base Camp on the north side of Everest, they are experiencing the shock of seeing rural Tibet. Javi Clayton made this post on Facebook:

Spending our first night at Nyalam after crossing the border. This is the crappiest town on earth.

Don’t worry, Javi, you will have a huge smile on your face once you see the majestic North Face of Everest.