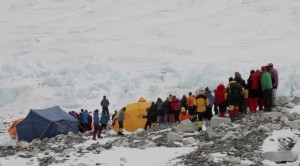 On April 27th, s 2013, a fight broke out on Everest with ramifications that still echo four months later. It involved Sherpas and three European climbers. The Europeans have had many interviews, and press releases to describe the events. The Sherpas lacking the means or perhaps the desire, had remained silent.

Now, one of the Sherpas who was directly involved in the fight has spoken publicly. Tashi Sherpa, 30, who worked for International Mountain Guides (IMG) was on the Lhotse Face on April 27th plus at Camp 2 where the real violence broke out. He was a member of the rope fixing team.

He was interviewed by freelance reporter Deepak Adhikari in Kathmandu in his native language. The interview was translated into English and posted on the website Outside Online.

This is the first time we have heard a Sherpas’ version of the incident directly from a Sherpa who was there. There have been numerous accounts from the three Europeans involved, plus blog posts from Western Guides and expedition operators, some claiming to represent the Sherpa’s viewpoint. See the list at the end of this post.

Throughout this post I refer to Tashi Sherpa by his first name to avoid confusion with any other Sherpa as it is a common last name used by the Sherpa people.

The attached images were provided by film maker Elia Saikaly who was at Camp 2 throughout the incident.

This continues to be a story because of the long term implications for Sherpa-Western climber relationships. Or more specifically, the changing Sherpa culture.

While I remain convinced the fight was more of a personality conflict that was brewing for years, there seems to be an underlying “resentment” within the Sherpa community that has not been openly expressed until now. But to be clear, this is one Sherpa speaking only for himself.

The story of the fight dominated Everest news throughout the spring season and generated numerous follow-up stories across the world. It was used as an example of everything bad about Everest from commerm, to crowds, to taking advantage of the Sherpas.

The big picture is that the Sherpas were setting the fixed line on the Lhotse Face to Camp 3. This is hard, physical work that can be dangerous if ice or rock falls and hits a climber. Earlier, all the commercial teams were asked to attend a meeting to coordinate the rope fixing. While suggested, it was not a mandatory meeting but most teams send a representative. This is standard procedure and has been going on for a decade on Everest. The professional climbers involved did not attend the meeting. 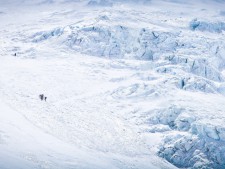 The Europeans approaching the rope fixing team on the Lhotse Face. Courtesy of Elia Saikaly www.eliasaikaly.com

The normal process was to leave the rope fixers alone on the Face to minimize interference and potential injury. It was also a sign of respect for a job in which the Sherpas take great pride.

A European team of Simone Moro, Ueli Steck and their photographer Jonathan Griffith choose to climb that same day to acclimatize at their previously establish camp high on the Lhotse Face. They had a permit to climb and every right to be there. They were attempting a new route on the West Ridge starting from Camp 2 so acclimatizing up to the South Col was appropriate thus climbing the same route as the commercial teams.

Upon seeing the Europeans climbing, the Sherpas asked them stop, but they refused saying they would be careful.

He Said – He Said

From this point on, the story becomes he said – he said with dramatically different versions based on the 10+ public interviews with the European climbers and the one with Tashi Sherpa.

Simone Moro, the most vocal of the European climbers, simply stated and was consistent that “… we didn’t bother anyone, and we climbed fast, alpine style to Camp 3 and when we went to our tent they just exploded.”5

Tashi summed it up this way “The three ignored our warning and climbed up. Ueli grabbed Mingma’s chest, and Simone used foul words.”1

The Europeans say they did not kick ice on the Sherpas.2,3,8 Moro claims the Sherpas threw ice at them.6  Tashi said the Europeans kicked ice onto them injuring an Adventure Consultants Sherpa.1 Oddly, he said they lied about this incident in earlier reports saying the Sherpa fell by himself and hit his face on the ice.

Steck said he used his hands to protect himself as a Sherpa rappelled into him.8 Tashi claims Steck rushed the Sherpas, grabbed a Sherpa by the jacket and pointed his ice axe at him.1

Both sides agree there was cursing and yelling on the Lhotse Face but a different levels of intensity. Simone Moro admits saying “Mother******, what are you doing?”6 Tashi reported that Moro said: “We will see; we will talk with the f******g Sherpas. We will come there and see.”1

The Sherpas felt extremely disrespected and insulted according to Tashi. He goes on to say they felt an apology was required before moving on.

Back at Camp 2, Simone said they were in their tent when a mob of Sherpas (100) approached them, throwing rocks 8. Tashi says it was just the rope fixing team and more Sherpas gathered curious about the commotion.

Tashi said as they went to the Europeans tent to get an explanation and apology for what happened on the Lhotse Face a western guide “assaulted” one of the Sherpa and a brawl erupted.1  Other reports note a guide did attempt to stop the rock throwing by knocking a stone out of a Sherpa’s hand.

Tashi admits Moro was kicked or punched by an unnamed Sherpa. He denies threating to kill anyone.1 Moro, Griffith and Steck are adamant that their lives were threatened. 2,3,4,5,6,7,8

Both side do agree on some things.

The Europeans credit Melissa Arnot for stopping the fight along with IMG’s Greg Vernovage 2,3,4,5,6,7,8

The Europeans state the fight was a result of years of building resentment from the Sherpas towards Western climbers who under pay and under value the work of the Sherpas.2,3,4,5,6,7,8 Tashi Sherpa also says resentment has been growing but the Sherpas had suppressed their feelings.1 Tashi goes onto say this specific incident was due solely toward Simone Moro.1

The Europeans, and long time Everest climbers such as Pete Athens believe more such incidents could occur. 2,3,4,5,6,7,8,19 Tashi says similar incidents “will happen again as long as Sherpas are humiliated”1

It is clear there is a generational shift in the Sherpa community. Some Sherpas that worked for expeditions in the 1990’s are too old to keep up with the demanding physical demands.

Young Sherpas are now leading expeditions, taking on roles previously held by western guides. Their skills are improving each year as is their confidence. Some claim that they are no longer there to be subservient to the western climbers but to climb side by side and ed as an equal.

The attraction to run their own company or serve as an expedition Sidar (Sherpa leader) is strong. The money is too good to pass up for many. The average Nepali earns about $500 per year, but the Khumbu Sherpa are on a different level.

Adrian Ballinger owner of Alpenglow, told Alpinst Magazine that a Sherpa with his team will make between $6,000 and $8,000 for a South side Everest climb while a Western guide will take home between $18,000 and $30,000. It is important to note a Western Guide is often responsible for all the logistics, payroll, rescues, medical events, coordination, making large and small decisions on and off the mountain plus overseeing members, Sherpas, cooks and other workers.

While the Sherpas want to be paid like a western guide, this may not be possible as local operators offering rock bottom prices take over Everest.

A new generation of Kathmandu based guiding companies are gaining momentum over the Nepal Himalayas offering expeditions at dramatically lower prices than even long time Nepali guides such as Asian Trekking or the core western guiding companies.

Alpinst Magazine reported that one Nepali guide company, Seven Summits Treks, offers an Everest South side expedition for $18,500 per climber. Many of their 98 members in 2013 were from India and Nepal in 2013. Most guides average around 10 members.

But it seems like a price war has broken out with the local companies dropping prices. Himex, headquartered out of France, charges $63,000 and Asian Trekking is reported to charge around $37,000. U.S based International Mountain Guides (IMG) offers a Sherpa Guided expedition for $40,000.

Long time operators worry that companies who charge low prices and take on huge number of members will not have the ability to react to emergencies, changing conditions or employ Sherpas who have the skills to guide on Everest.

Time will tell how the Everest guiding environment will evolve but it is clear the genie is out of the bottle.

11 Responses to “Everest 2013: A Sherpa Finally Talks About the Fight”