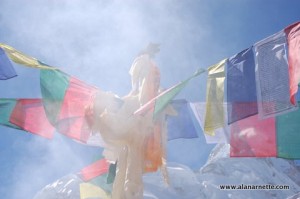 The serac collapse into the Khumbu Icefall last Friday has not only taken at least 16 lives, s it has changed Everest climbing forever.

Emotions and relations are tense today at Everest Base Camp with Sherpas presenting the Ministry of Tourism a set of 13 demands ranging from improved insurance to improved pay as part of the millions the government earns from permits each year.

Teams are currently on hold waiting for the Ministry to respond to the demands, search They gave a date of 7 days or April 28, 2014 or they will stop climbing. Already, climbing has been halted for a period of mourning. Plus bad weather stopped all further efforts to search for bodies in the icefall. Some Sherpas, but not all, returned to their homes which are normally less than a days walk from base camp.

If enough of the largest commercial teams cancel their season, the smaller teams will be encouraged to leave as well. In 2012, Russell Brice, Himex, canceled his season on May 1 after his Sherpas expressed significant concern about passing underneath the same area that released last Friday. He has 43 members and Sherpa climbing on Everest and Lhotse this year.

UPDATE: late Monday in Nepal, Alpine Ascents (AAI) announced they were ending their Everest 2014 season. AAI had  a large part in supporting the logistics team supporting Joby Ogwyn wingsuit attempt plus had Sherpas killed in the serac collapse. They had 12 members, 2 guides plus and employed more than 20 Sherpa.

Climbing on the north side of Everest continues with teams already at Advanced Base Camp but the Chinese are refusing entry and permits for climbers not already in Tibet or on their target mountain. This has been ongoing for several weeks. In essence this will leave south side climbers without the option to switch to the north side unless Beijing changes it’s mind. – end update.

NBC Universal, Peacock Productions announced late Sunday night that the wingsuit jump off Everest’s summit has been canceled out of respect for the victims of the serace collapse. There is a report that Ogwyn wants to do the jump anyway but it will not be televised.

The Ministry of Tourism had previously announced an immediate payment of $400 to cover burial expenses for each family of the Sherpa victims. For 2014, life insurance for each Sherpa was increased to US $10,000 from $4,000. The Nepal government collected US $3,107,700 for the Everest 2104 season.

Multiple funds have been established to accept donations supporting the Sherpa families.

The demands from the Sherpas are wide ranging and include:

• Cover all expenses for ment of the injured

• Double the insurance amount to the mountaineering workers

• Provide perks and salaries, except summit bonus, through concerned agencies to Sherpas if they want to call off climbing this season

The environment at Everest Base Camp remains very somber now with a further umbrella of uncertainty. Some Sherpa are willing to continue accepting the risks as are some foreigners; others have already left base camp never intending to climb again.

Tourism is the lifeblood for Nepal but everyone from climbers to yak herders wants a safe and clean environment. Simply stopping climbing on Everest or any of the dangerous Himalayan mountains would have a severe impact on Nepal.

Clearly, the loss of life is unacceptable and I know of no climber who would ever callously risk the life of a Sherpa, guide or teammate for a summit.

Alternatives to preventing a similar event such as an ice serac collapse range from none to few and each have implications with complicated consequences.

The nature of an ice serac prevents it from being “removed” by blasting as is done in ski resorts due to the remote location, uncertain terrain, unpredictable results of a blast not to mention Everest, and many other mountain in the Himalaya, are consider sacred and blasting would probably not be acceptable.

Simply not passing underneath the so-called “objective danger” is another alternative but the reality is that the route through the Khumbu Icefall adjacent to Everest’s West Shoulder is the safest route to access Everest from the Nepal side.

Reducing the number of passes is probably the solution to reduce exposure and this could be accomplished by acclimatizing on other Himalayan peaks so as not to reduce the money spent in Nepal and work for the porters and Sherpas. Many teams already utilize this strategy including IMG, Peak Freaks, and Himex. However, even this scenario requires multiple passes in high risk areas, something unavoidable when climbing any 8000m mountain.

Reducing the number of trips for Sherpas is a good strategy. One way to eliminate some trips would be to simplify the camps above base camp, reducing the amount of oxygen used thus the number of cylinders required, or by asking each climber to carry their own stove and fuel. This would increase the risk for the climbers but also require them to be more self sufficient, experienced and prepared.

Using helicopters to ferry climbers and supplies directly to the Western Cwm thus avoiding the icefall altogether has been discussed but it would be dangerous as helicopters are generally stripped down to a minimum weight when flying at those altitudes so it would require multiple flights, each with it’s own risks, as well as an enormous expense. Remember these are altitude above 20,000’/6000m, higher than the summit of Denali, or Mont Blanc. If note, this was proposed by some operators for 2014 but turned down by the Ministry of Tourism.

In almost every scenario the number of Sherpas required to work on Everest each season would be reduced, thus lowering their income and increasing some risks in general.

An unintended consequence of making the Nepal side more expensive or with less support would be to encourage people to climb from the Tibet side. The Nepal side is more popular with 4416 summits than the Tibet with 2455 summits and overall 262 people (161 westerners and 101 Sherpas) have died on Everest from 1924 to 2014, 154 on the Nepal side and 108 from Tibet. There has been a measurable increase in the number of deaths of both members and Sherpa on the Nepal side since 2009.

The current formula for commercial guiding on Everest and other popular mountains around the world is based on a high level of support, advanced oxygen and other technologies, sophisticated weather forecasting, known routes and professional guides.

This formula has opened mountains to people otherwise unqualified to attempt them independently. It has created an economic model where customers get what they want, and well paying jobs are created for the local population when compared to the nearby alternatives.

All this said, the risk are real, and tragic with long term devastation to families of the fallen. No job anywhere of any type is worth a person’s life.

The only true solution to preventing deaths of Sherpas, members, and guides is to stop climbing. Increasing pay and insurance, while justified, will not save lives.

I want to express again my own personal sorrow at the loss of life and express my deepest sympathies for the families.