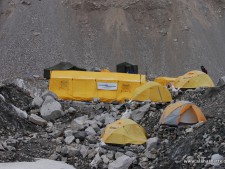 International Mountain Guides, IMG, who has the largest team climbing from the south side of Everest has ended their season. While there has been no official comment from the other large teams including Asian Trekking, Himex and Altitude Junkies, the IMG decision most likely ends all attempts from the south.

Climbing is still occurring on the North side of Everest and other Himalayan mountains.

IMG fields a very large team of Sherpa who are key in fixing the line to the summit. Without their support, other teams would struggle to find the manpower, although it would still be possible with excellent cooperation. However, time is running out to attempt a summit.

This is the IMG statement:

IMG leaders Greg Vernovage and Ang Jangbu Sherpa have been forced to end the expedition due to the perilous conditions resulting from the April 18 Icefall avalanche. After several days of intense meetings at Base Camp and in Kathmandu among climbers, sherpas, and representatives from the Ministry of Tourism, no agreement was reached on restarting the 2014 Everest climbing season. The Icefall route is currently unsafe for climbing without repairs by the Icefall doctors, who will not be able to resume their work this season. We have explored every option and can find no way to safely continue the expedition.

The IMG team will be starting down valley in the next few days, with some trekking and some hitching rides by helicopter. They are joined by climbers from other expedition teams that had also been waiting at Base Camp and have also been forced to end their climbs.

A meeting was held with government officials in Kathmandu on Wednesday resulting in an agreement to send a high level official to base camp to discuss the situation. The Nepal government has said they would put a team of officials at EBC this year but reports are the officials never appeared at base camp furthering distrust with the Sherpa community.

Also, the Ministry agreed to allow helicopters to ferry supplies to Camp 1 for 2014 and perhaps beyond.

Climbers are posting their personal status and in general have mixed emotions of support for the Sherpas while watching their own dreams fade away.

I’m told there is not unity within the Sherpa community and this is driven by a few young, very vocal climbing Sherpas who are using the media very well.  The primary reasons for the Sherpa’ discontent range from increased pay and life insurance for all Sherpa, support for families of climbing Sherpa killed on Everest to having an equal position along side commercial guides to showing respect for the victims of last week’s serac fall. Also, many people, Sherpa to Western Guides felt the Icefall was unsafe this year.

The clock is ticking for teams to properly acclimatize due to no climbing this week. By this time in April, most climbers would have spent several nights at Camp 2, 21,500′, and be preparing to spend that important night at Camp 3 on the Lhotse Face.

Usually, the first summits are by the Sherpa rope fixing team in early May. But they would have had the ropes, anchors and supplies already positioned by this time at Camp 2 and nothing has been carried there as of today.

– Current reports from Tibet side shows no issue, team climbing and are at Advanced Base Camp

– North side teams are unaffected and  good progress. There will be Everest summits in 2014

– Alpenglow has canceled their season asking members not to fly to Nepal.

– A small segment of the Sherpa loosely associated with the Maoist at EBC had threatened other Sherpa and their families if they did not go along.

There are many questions about if the Sherpa still get paid and if members get refunds. It depends is the answer as it varies from each team.

Every team will manage paying Sherpas differently. Most are paid on a per carry/load basis so no carries, no pay. Others get a flat salary, others get a daily rate. Some teams have offered to pay them in full no matter what happens. For many long time teams, Sherpa are family and they are taken care of climb or not …

As for refunds, in general, members do not receive refunds regardless of circumstances. In 2012 when Himex canceled their season, there were no refunds but discounts on future climbs. Almost all the money is spent up front on supplies, permits, transportation, labor so very little is left at this point.

The next question is the long term impact on climbing Everest. Time will tell but I expect prices to go up based on the increased Sherpa compensation, less Sherpas to be hired as a result of using helicopters and higher member prices, fewer climbers due to higher prices and the increased awareness of the risks. But, in the past after a difficult year, there were more climbers that next year. But 2014 was not a normal ‘difficult’ year

Remember teams are still on the north side. It is unclear if the Sherpa on that side will quit as well. Many teams use Tibetan staff for their support due to Chinese rules.

I will update this post as more reliable information becomes available.