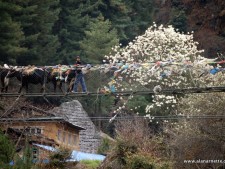 Yaks crossing bridge at the beginning of the Sagarm?th? National Park

With April 1 just around the corner, medicine it looks like business as usual on Everest. Team after team are updating their websites, blogs, Facebook and Twitter feeds saying the weather is good in the Khumbu and they have had little problems thus far.

Apparently Kathmandu had heavy rain last night and fog this morning thus delaying a lot of flights to Lukla, but again, this is somewhat normal.

Oxygen suppliers tell me they are having record s and the permit process appears to be smooth. It is still too early to make the same conclusion about teams climbing from Tibet as they normally don’t try to cross the boarder until April 10.

Dave Hahn with RMI posted this on his Facebook page along with a picture of Everest:

EverestEr is making their way to Base Camp to set up their annual support for the Sherpa community and climbers. They do such valuable work.

The Icefall Doctors have been at Everest Base Camp now for over a week and are starting to investigate the route to Camp 1. No solid news yet, still very early.

So, for all the negativity, this season is off to a good start.

4 Responses to “Everest 2015: Teams Streaming into the Khumbu”