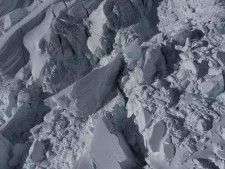 Enlarge to see the 2015 route in the Khumbu Icefall. Courtesy of Madison Mountaineering

Today, Friday, April 17, a collapse of a four ladder traverse across a huge crevasse in the middle of the Icefall, caused 80 Sherpas to turn back. There were no injuries.

The Icefall Doctors will go back up to inspect the situation and either reinstall the ladders, or find a new route around the crevasse.

So all teams remain at Base Camp. This is not unusual but everyone in getting a bit anxious to get into the Western Cwm.

The attached photo taken by Garrett Madison show the area. You need to zoom in to see the actual ladder and monster crevasse.

Tomorrow, April 18th, is the first anniversary of the death of 16 in the Icefall from the release of an ice serac onto the Khumbu Icefall. There will be a ceremony at Everest Base Camp to honor all those who died.