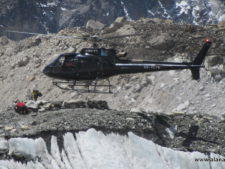 The Nepal Ministry of Tourism who manages Everest and other Nepali peaks often makes announcements that seemingly have no foundation in reality, for example putting a ladder on the Hillary Step or stopping climbers with disabilities from climbing from Nepal so it’s curious that one of the most significant changes since Everest was first summited in 1953 has been approved with no fanfare.

As I reported last week, through the work by the Expedition Operators Association (EAO), the Ministry has approved using helicopters to ferry gear to Camp 1 in the Western Cwm this spring 2016 climbing season. No climbers or support staff will be helicoptered into the Cwm. Specifically the gear is limited to only ropes, anchors and oxygen used by the rope fixing team to get the safety line from Camp 2 to the summit. In the past this gear was carried on the backs of Sherpas thru the Icefall. It is estimated the helicopter lift will eliminate 87 loads this year.

This is extremely significant as the temperatures this spring have been higher than usual creating a level of concern about climbing thru the Icefall. To be clear, no significant avalanches have occurred onto the Icefall as of this post and most operators are continuing with their programs as they have for decades.

However, any reduction for the Sherpas who make more carries thru the Icefall than foreigners is welcomed news by all. Most sherpas will go thru the Icefall about 18 times while foreigners will do less than 6 but these numbers are very operator dependent.

As of this post’s date, there are teams already at Camp 1 in the Western Cwm, and some will continue to Camp 2 for a few nights before retuning to base camp. The route thru the Icefall is a bit more difficult than last year in the lower sections and about the same up high, but the Icefall Doctors are continuously fine tuning the route as the Icefall moves about a meter, or 3 feet, each day thus moving ladders and ropes.

As I walk thru base camp, there continues to be an air of optimism that this will be a no-drama year. Climbers seem to have internalized that the dangers are real and everyone needs to be highly aware and move fast thru the dangerous areas. Personally, I continue to be concerned about the level of experience of the average climber, both Sherpa and foreigner, this year as I was last year.

The route up the Lhotse Face is expected to return to the 1953 path which starts to the climber’s right at the bergschrund instead of going directly up the center of the Face. It was used in 2012 for similar reasons. This is primarily due to a low snowfall winter that is assumed to have left the Face dry and more prone to rockfall. But again, once the rope fixing teams get there, the final decision will be made as to where to place the route.

The route to the summit will be fixed by Sherpas in a joint effort of many teams. The Icefall Doctors stop fixing the route at Camp 2 and the commercial teams then take over. Over on the Tibet side, the route is fixed from ABC to the summit by the China Tibet Mountaineering Association (CTMA) each year. For many years it was set by Himex until they moved to the South in 2008.

Speaking of the North, the first teams are starting to arrive with 7 Summits Club at Chinese Base Camp today. Others are in transit, escorted by their CTMA liaison.

So, it is April 21 and there is progress on both sides. We have a long time to go. Everest summits traditionally begin around mid May on the South and a bit later on the North. Lhotse summits perhaps a few days earlier than Everest.

Teams are working hard to acclimatize at Camps 1 and 2, with a few reducing their rotation to only one due to the high temps in order to reduced trips thru the Icefall. Others are sticking to their long time schedule of multiple rotations and a night at Camp 3 on the Lhotse Face. The Sherpas are setting up the high camps aided by a lot of gear that was left there from the shortened 2014 and 2015 seasons.

And of course, the helicopter lift is welcomed news for anyone concerned about trips thru the Icefall. Thanks and well done by the EAO and the Nepal Government for this change. The gear should be moved any day now.

By the way, it is overcast and cold this afternoon!