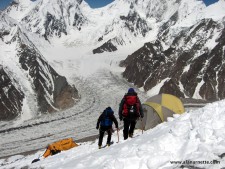 Climbing teams are scattered all across the Karakoram this early July seeking to summit the five 8000ers located in Pakistan.

Most are progressing well with several nights already spent at the lower to mid level camps around 7, 000 meters as they acclimatize to the higher altitudes. A few climbers, five reported thus far, have abandoned their climbs due to injury and other issues.

The week starting with the 4th of July saw the weather turn a bit ugly with heavy snow reported at multiple base camps thus teams are locked down for a few days – all quite normal in July in the Karakoram.

As previously noted, it is a busy season on K2 but the other peaks seem to be about normal for permits. This is a list of the Karakorum 2016 Expeditions permits issued for all the Karakoram mountains this summer. The summary is:

Usually the Gs are fairly crowded but K2 seems to be taking the spotlight this year.  My Colorado climbing buddy, Ryan Kushner and team are on GII and have reached 7000 meters thus far.

The ‘Killer Mountain’ has a deadly reputation not only for climbers but also as the site of a the 2013 massacre at base camp where 10 people were savagely killed allegedly by terrorists. At 26,660’/8126m Nanga is know to be one of the more technical 8000ers. There have been around 350 summits including several this past winter leaving K2 as the only 8000er not summited in winter.

There are just a few teams on NB and they are making progress. Ferran Latorre reports on his blog that they have been in base camp for two weeks. They tagged 7,000 meters and began considering a quick summit run but the jet stream arrived to stall their plans.

However, the excellent website Altitude Pakistan reports “Ferran, Yannick & Helias are ready for summit-bid on unfinished line on North Side, whereas Kinshofer Route climbers are still to reach C2.”

BP is often concerned a warm-up for K2 but that grossly understates the difficultly of this 26,414’/8051m peak. About 410 people have summited.

For 2016 there are only a few teams based at Broad Peak base camp even tho 79 permits were issued – many of those were for K2 climbers hoping to summit BP after K2. In reality many plan for this and few accomplish it.

The Mountain Professional team arrived at base camp on 21 June to find it all to themselves, and not to their liking:

It has been crazy to watch the daily influx of climbers and groups to K2, as they walk right next to our camp, but still no other team on Broad Peak except us. This is challenging for our team, since commonly in Pakistan teams band together to fix rope and we have been left to do the lions share here, since we heard at least two groups had problems getting in to Pakistan, and of course these were the ones that were most likely bringing lots of manpower and gear to contribute to fixing our route.

We have ordered up more rope and pitons from Skardu, in the event we are forced to be self reliant here, we hear rumors of groups coming but not sure what is the case so we press on. We were a bit early arriving so we expected to most likely fix the first part of the route but now could use some collaboration, we press on and look forward to a good C1 rotation.

But a couple of other teams arrived, however not as strong as the MP team wanted to see. They were on their second rotation planning on a night at C2 or 6300 meters but when the winds picked up, they returned to BC.

With a sobering death to summit ratio of about 25%, K2 is the most challenging of all the Karakoram 8000ers. The second highest in the world at 28,251’/8611m it is significantly more difficult and dangerous than Everest. This year, K2 has a record 112 permits issued for it. Historically, only 355 people have summited K2.

Weather is reported acceptable thus far with some days showing high winds but snow conditions seem better than last year when no one summited K2.

Teams are reporting the fixed ropes have been set to C2 (22,000′) and a combined effort of Sherpas from several teams are working to fix the Black Pyramid to C3.

There are only a few large commercial teams but a slew of small teams consisting of a few foreigners supported by many Sherpas and Pakistanis. This means coordination could be difficult and is requiring the long time experienced K2 leaders like Kari Kobler to step in.

However it seems that the crowds and inexperience are beginning to show on K2.  Laura  & Yuri posted this on their Facebook page (translated by Facebook). They are with Austrian Kari Kobler:

If something we talk about when we refer to the mountain, is the team work and the importance of this to get to the summit. On this occasion, it has come a lot of people at the k2, make it a bit later to go behind the expeditions as big as ours (sucking wheel, as in the cycling), but due to the difficulty of this mountain, where the spaces for the camps They are truly reduced, a lot of people had the nerve to come up with no store and just looking for some empty to get to sleep using the sleeping bag of someone else and why not, if in that store is there anything you need, then take it as an ice axe That magically disappeared out of a store of our team.

And Di Gilbert with Adventure Peaks noted the high winds near C2 and the traffic at Houses Chimney:

The weather starts off fairly pleasantly but soon turns into a biting wind. Jake storms ahead and makes it to Camp 2 but with a rather large bottleneck of people at House’s Chimney, Di & Pete decide to camp at the bottom on the Chimney.

Nic Rice is doing a nice job of documenting his K2 attempt on his blog.

OK, overall so far so good. Best of luck to all on all five peaks.