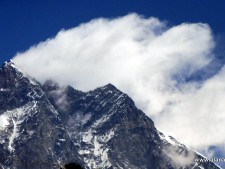 There comes a time in every expedition where you feel like the world is conspiring against you. Well, not always, but often enough that the talk over meals, whispers outside the tents and prayers revolve around one thing – good weather! 2017’s word of the day – wind, is quickly becoming the word of the season.

Sherpas were stopped from finishing the route to the summit from the South Col on Monday by high winds, and cold temperatures. In general the winds need to be under 30 mph/50 kph for sain climbers to consider a summit attempt.

We have seen many cases of severe frostbite when the winds remain significantly higher and climbers refuse to turn back – this is called “summit fever” and the only cure is to climb with someone who is not willing to summit at the cost of life or limb.

But what if these winds do hang around for a while, what happens?

How Late is Late?

To keep all this in perspective, this is how I summarized the 2005 season when weather proved difficult:

Quite a season! The summits on May 21 were the latest first summit day in 45 years of climbing Mt. Everest. Norgay and Hillary did it on May 29, the earliest was April 4 in 1984. But it was still a good year for summits with over 230 climbers standing on the top of the world. To put this in context, around 150 made the summit in 2004 with the first summits on May 15.

A team of Sherpas set out the evening of May 17 to set the route to the summit. This team of skilled Sherpas came from IMG, AAI, Peak Freaks, Chilean, 7 Summits.

On their heels was a Chilean team, 20 strong, lead by Chilean legend Rodrigo Jordan. They along with the rope fixers plus Ulei Steck who tagged along, umm, without supplemental O’s I might add, all summited the morning of May 18 – the first of the season.

So while sitting at 11 May, people might start getting antsy, history has shown there is still a lot of time left. On the Nepal side the driving factor for when the season “ends” is when the Icefall Doctors declare the Icefall too dangerous to maintain. Traditionally this has coincided with the arrival of the monsoons, about 1 June.

On the north side, there is no hard stop given the absence of an Icefall type feature.

Topping all these practical limits, many climbers buy 60 or 90 day visas and extending them from remote base camps can also be an issue, but rarely happens for Everest climbers.

Not everyone is sitting still on the Nepal side. Jannick Graziani, climbing without supplemental Oxygen reached the South Col (as have hundreds of Sherpas stocking the high camp):

6 hours from C3 to south col. Very windy and cold, so i did not stay there too much. Well, I was able to see the next step … so close, so far! Even with no OX, I was quite comfortable … as well as possible. Good breathe, bad stomach!I went back directly to BC with a beautiful light in the late afternoon in the west CWM. Had a good night. Let’s see what could be the plan right now.

Tim Mosedale was one of the teams hoping to sneak in an early summit but the lack of fixed lines to the summit plus deep snow turned them back. They are now at EBC. I found his observations on the condition of the Lhotse face interesting. Good post by Tim that should be read in full:

The conditions on the Lhotse Face were very challenging indeed. Obviously it wasn’t helped by the weather but the going underfoot was the toughest I’ve come across. The ice is bullet hard and there’s not really any evidence of foot placements from previous climbers. So every step was a brand new placement … and if you’re not sure footed you’ll be all over the place with your feet constantly skating away from beneath you. Which should be fun when there’s lots of inexperienced people hanging off the ropes. 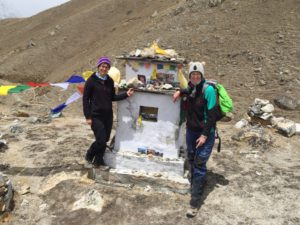 Adventure Consultants made a moving posts today regarding the 21st remembrance of the 1996 disaster on Everest that took so many lives including that of Adventure’s Consultant’s leader Rob Hall:

Today is the 21st anniversary of the much documented Everest 1996 tragedy when Rob Hall, Andy Harris, Yasuko Namba, Doug Hansen, and Scott Fisher perished in a storm high on Everest. Most recently this story was told in the 2015 Hollywood Motion picture titled ‘Everest’. Rob Hall was the founder of Adventure Consultants.

Today we are privileged to have Rob Halls former wife Jan Arnold, niece Emily and a friend Mary staying at BC. In the movie ‘Everest’ Jan was played by Keira Knightley. It is a spiritual journey of remembering. It is lovely to have them staying.

Altitude Junkies posted they had summits on 10 May, but no details yet.